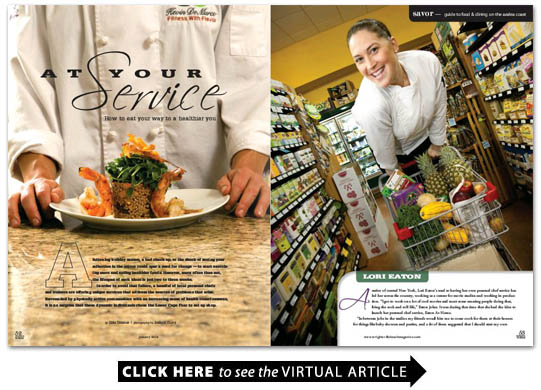 A fattening holiday season a bad check up or the shock of seeing your reflection in the mirror could spur a need for change to start exercising more and eating healthier foods. However more often than not the lifespan of such ideas is just two to three weeks.

In order to avoid that failure a handful of local personal chefs and trainers are offering unique services that address the sources of problems that arise. Surrounded by physically active communities with an increasing sense of health consciousness it is no surprise that these dynamic individuals chose the Lower Cape Fear to set up shop.

A native of central New York Lori Eatons road to having her own personal chef service has led her across the country working as a caterer for movie studios and working in production. “I got to work on a lot of cool movies and meet some amazing people doing that living the rock and roll life ” Eaton jokes. It was during that time that she had the idea to launch her personal chef service Eaton At Home.

“In between jobs in the studios my friends would hire me to come cook for them at their houses for things like baby showers and parties and a lot of them suggested that I should start my own thing ” Eaton says. “So I thought why not? I will be the small scale caterer instead of catering for huge Hollywood productions.”

Eaton soon returned to the East Coast. “I knew Eaton At Home was what I wanted to do but Hollywood was not where I wanted to do it; the drives I would have to make were killing me ” Eaton says. She arrived in Wilmington in 2005.

Eaton says that what makes her service so unique is that she develops a very trusting relationship with her clients oftentimes becoming almost another member of the family. “One of my clients has set up a crofter beside their house on Bald Head Island that I stay in when I cook for them in the summer; another flies me down to wherever they are vacationing. I have numerous colored pictures from the kids of some of the families I cook for. Its a really neat relationship that I get to develop with them that I just wouldnt get doing anything else ” Eaton says.

The relationships she develops with her clients helps Eaton with her cooking. “I get to know exactly what they like what they dont like little nuances about different dishes and special dietary requirements ” Eaton says. Nutritional and dietary software programs help map out every new clients menu addressing every minute detail of their tastes and health restrictions. Eaton insists on buying fresh food and creating simple menus.

“I grew up eating from our personal garden so that kind of simplistic fresh ideal is evident in my cooking style. For example if you have a perfectly ripe tomato what else do you need other than a little salt and pepper?” Eaton asks.

As for who compromises her clientele there is a wide variety. “At first I was targeting dual-income families with a little expendable income but since I moved to Wilmington Ive had a lot of new clients with special dietary restrictions who come to me because they simply dont know what to cook for themselves ” Eaton says.

Bob and Rosemary Kline say that Eaton has become indispensible in their lives. “We were so blessed to have Lori recommended to us because we are elderly and were not eating properly ” Rosemary says. Now Eaton prepares 14 dinners for the Klines every two weeks and has even prepared large Thanksgiving dinners for the past two years that the Klines take to the mountains where they celebrate the holiday.

“The thing about Lori is that she has a very welcoming and easy-going personality; I have even asked her if we could just adopt her ” Rosemary laughs.

Regardless of who her clients are Eaton says that she just loves to please people with her cooking and loves the variety and excitement she can bring to her clients eating habits that they would not get otherwise.

To find out how to employ Loris multifaceted services visit the Eaton At Home website at www.eatonathome.com

A New York City chef a restaurateur an amateur body builder and a personal trainer native of Queens Kevin DeMarco has combined his varied experiences in both the food and fitness industries to create his own ideal program targeted at making permanent healthy changes to key areas of personal health.

The philosophy at DeMarco Studios is based on a 60-40 principle.

“With my food background Im different from a lot of other trainers because I view what you put into your body as 60 percent of the equation. Without the proper fuel and nutrients how are you going to see the maximum results? You have to take care of whats inside before you work on the outside ” DeMarco says.

With a client base that ranges from teenagers seeking sport-specific training to others in their 70s striving for maximum health DeMarco does it all. However the majority of his clients 40 or older are looking for a lifestyle change.

“I always let new clients know that if theyre coming to me its not to drop a quick 20 pounds and then forget about it. Its more of a gradual process but one that will instill the necessary psychological and physical habits so they dont relapse ” DeMarco says.

A client of DeMarcos for two years Jayce Schmidt says that she still finds herself being pushed to achieve more during their sessions. “Kevins cooking and fitness styles are very much alike in that he is constantly thinking of new variations and changes to keep everything interesting ” Schmidt says. Now in her early 50s Schmidt says that she never intends on dropping DeMarco Studios from her life: “When you get older would you rather spend money on going to the doctor and medicines or going to a personal trainer like Kevin who has so much experience with healthy cooking?”

Every client at DeMarco Studios receives an outline of foods they should stock in their pantry along with numerous tried and tested recipes that DeMarco has developed during the yearsall of which are low in fat and preservatives but packed full of taste. DeMarco says that you can talk to nutritionists and hear exactly what is good for you and what to avoid “but they dont know how to make it taste good.”

Most of his recipes follow a Mediterranean or Spanish cuisine with a little Middle Eastern influence like a roasted sea bass with spiced pumpkin seed crust served with caramelized pumpkin polenta cakes. By concentrating on the subtleties of each dish DeMarcos love of textures tastes and garnishes help his clients forget they are eating healthy fare.

“I have done everything from business dinner parties anniversary dinners or even Valentines Day dinners for two. People hire me for these kinds of things because they know the food is going to be really good while also being really healthy ” DeMarco says.

DeMarco also offers cooking demonstrations at Taste the Olive in the Forum.

“I dont use a lot of salt or butter and these vinegars and oils work perfectly as healthy substitutes ” DeMarco says.

For more information about DeMarco Studios visit his website at www.wilmingtonhealthcoach.com

The Historic Burgaw Train Depot does not look like the home base of one of the areas most innovative and popular new small businesses. With its well-kept exterior and newly painted pair of boxcars it looks more like a museum.

The site is a clever disguise for the sparkling stainless steel commercial kitchen equipped with professional grade walk-in freezers housed in one of the boxcars. This is where Mike Clays Custom Fit Meals are prepared.

It is hard to picture Clay now a tall muscular guy with an upbeat personality at 300 pounds and miserable. “It was my 25th birthday I couldnt get out of bed and my soul hurt from the way that I felt about myself and the way others thought about me ” Clay says. Soon afterward Clay decided he had to change the way he was living his life. He began to buy simple healthy foods and cook all of his meals every Sunday for the week ahead. “By cooking everything at once I was giving myself only one chance to fail to eat healthy instead of having to worry about that decision 20 times a week ” Clay says.

So began the start of Custom Fit Meals. Clay sold everything he had drove cross-country from Scottsdale Arizona to his native Wilmington North Carolina. Having a friend that offered to let Clay sleep on his couch helped his decision to come here but he soon realized that this would be a perfect place to start his new business.

“Freshness is a key component to our philosophy and because of that we have developed a partnership with the SENC Food Service which is a program that concentrates on having local businesses buy local produce. Their theory is if a business buys 10 percent of its product locally they put thousands of dollars back into the local economy ” Clay says. “I think what makes Custom Fit Meals special is how fresh everything is along with our ability to cater to exactly what our clients want whether it be increased meal variety dietary requirements or anything else.”

With constant changes being made to the menu like the recent addition of gluten-free and dairy-free menus Custom Fit Meals is evolving each day. Clients can choose from a variety of cuisines that span the different worldwide influences that make up modern American cooking. After they have placed their orders for the week clients can then pick up their meals two times a week at various gyms around Wilmington.

Clay says that the reason why so many people fall off track when it comes to implementing lifestyle changes is the fact that they do not know how to be consistent. “Most people try to change their lifestyle all at once; they try to do too much before they have developed the necessary habits and psychological tools to keep them on the right track. We take care of that problem first to implement change from the source ” Clay says.

Having personally seen drastic results from his program Clay says that whenever he hears he has changed someone elses life in a positive way it makes everything worthwhile.

One such client is Burgaw Chamber of Commerce Executive Director Donna Best-Klingel. Best-Klingel says that she started the program in 2010 when Custom Fit Meals moved in next door to her office.

“Mike brought me a meal a day for a few days and it piqued my interest because it was really good food and the concept interested me ” Best-Klingel says. A year and a half later Best-Klingel has lost 72 pounds dropped six sizes and has completely changed the way she views food.

“Now I actually appreciate good balanced food and before I eat something I always think about whether it is going to nourish my body or not. The Custom Fit Meals program really changes your perception ” Best-Klingel says.

As for Clay he is happy with how many lives hes changed in Wilmington so far but he wants to increase that number with the eventual goal of expanding his unique service to locations across the state.

To start your own Custom Fit Meals program or for more info visit www.customfitmeals.com