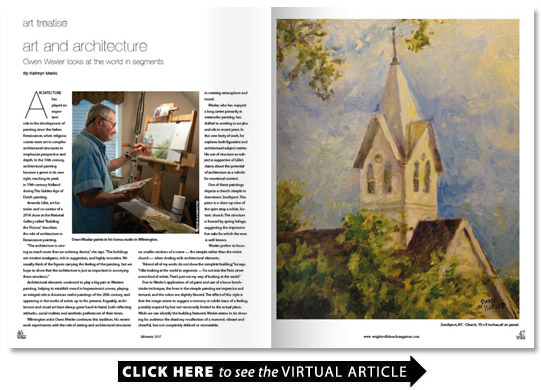 Architecture has played an important role in the development of painting since the Italian Renaissance when religious scenes were set in complex architectural structures to emphasize perspective and depth. In the 16th century architectural painting became a genre in its own right reaching its peak in 19th-century Holland during The Golden Age of Dutch painting.

Amanda Lillie art historian and co-curator of a 2014 show at the National Gallery called “Building the Picture ” describes the role of architecture in Renaissance painting.

“The architecture is serving as much more than an ordering device ” she says. “The buildings are creative amalgams rich in suggestion and highly evocative. We usually think of the figures carrying the feeling of the painting but we hope to show that the architecture is just as important in conveying these emotions.”

Architectural elements continued to play a big part in Western painting helping to establish mood in Impressionist scenes playing an integral role in American realist paintings of the 20th century and appearing in the works of artists up to the present. Arguably architecture and visual art have always gone hand-in-hand both reflecting attitudes social realities and aesthetic preferences of their times.

Wilmington artist Owen Wexler continues this tradition. His recent work experiments with the role of setting and architectural structures in creating atmosphere and mood.

Wexler who has enjoyed a long career primarily in watercolor painting has shifted to working in acrylics and oils in recent years. In this new body of work he explores both figurative and architectural subject matter. His use of structure-as-subject is supportive of Lillie’s claims about the potential of architecture as a vehicle for emotional content.

One of these paintings depicts a church steeple in downtown Southport. This piece is a close-up view of the spire atop a white historic church. The structure is framed by spring foliage suggesting the impressive live oaks for which the area is well known.

Wexler prefers to focus on smaller sections of a scene — the steeple rather than the entire church — when dealing with architectural elements.

Due to Wexler’s application of oil paint and use of a loose brushstroke technique the lines in the steeple painting are imprecise and textural and the colors are slightly blurred. The effect of this style is that the image seems to suggest a memory or subtle trace of a feeling possibly inspired by but not necessarily limited to the actual place. While we can identify the building featured Wexler seems to be showing his audience the shadowy recollection of a moment: vibrant and cheerful but not completely defined or recreatable.

This gestural quality holds true in Wexler’s other works like “Downtown House.” Here again the artist takes a partial view of the building foregoing the entryway and lower half of the structure and emphasizing the appearance of the roof and surrounding trees against the skyline. Rendered in subtle earth tones and featuring a red brick chimney and green tin roof in high contrast with the pale sky the home is both familiar and impossibly quaint; it could belong to a simpler bygone time or a street scene in a Hollywood film.

He spent the bulk of his career travelling to art shows up and down the East Coast attending a real-world course in what he calls “Art Show 101.” During this time Wexler primarily made beautiful beach scenes and picturesque landscapes that would appeal to a distinctly American sense of nostalgia. This style was at least partially cultivated.

“When I first set out to do this I wanted to be relevant to any people in America ” he says. “It had to be universal.”

Armed with youthful bravery and passion for painting with his supportive wife by his side Wexler achieved some renown as a watercolorist. He credits this in large part to his late wife and business partner Myrna.

Wexler describes interactions with famous creatives of the ’70s and ’80s long lists of lucky breaks and a stubborn creativity as integral to his career. But above all the painter highlights the invaluable importance of a loving ambitious and talented partner in life and business.

“I think for me the real force behind my success was the fact that I was married to the right lady ” he says. “She’s still behind me 100 percent.”

Now in a new stage of his career the act of creation has become more important than the final product. This is a big shift from an earlier impetus which was primarily to achieve commercial success in his passion while also supporting a growing family.

“I don’t really care so much what I paint ” he says. “I care much more for the act of painting; it’s the process not the finished piece. In fact I will frequently redo and redo and redo one of my oil paintings which was not an option with watercolor and now I have a greater ability to alter the outcome.”

When Wexler who has lived in the Wilmington area since the 1990s decided to go back to oils after his “retirement ” he found downtown and the beach towns to be a natural fit and an abundant source of inspiration.

“I’m intrigued by where I live and the people I live with ” he says. “I’ve loved everything about Wilmington since the day I came here.”

He describes it as a perfect complement to the freedom of rejoining the art world without the burden of relying on it for income.

“When I decided to go back and paint it wasn’t to make money but because it is in my psyche ” he says. “I like to periodically change emphasis from different materials to different ways of working. I just want to explore new things; I don’t need to be pigeonholed into a singular recipe and it is that process of creation that motivates me.”

The Dutch and Flemish painters who popularized cityscape and architectural paintings in the 16th and 17th centuries like Jan van Goyen and Jacob van Ruisdael ushered in a tonal phase and classical phase of this style. In these periods paintings were defined by soft blurred lines and an atmospheric quality as well as expressive compositions and dramatic contrast between light and dark.

One of his figural paintings shows a seated couple taking a break at Disneyland. In this work the over-the-top hyper-real sensory experience of Disneyland is absent. Instead the focus is on the small intimate exchange of two people who have ducked into a corner for some quiet and respite.

Rather than detailed portraits Wexler provides gestures of his subjects without specific facial features or marked references to the iconic setting. This allows viewers to place themselves in this sweet familiar scene or to recall a similar moment in their own past. And like the Dutch genre painters Wexler imbues this everyday vignette with importance and invites the viewer to consider the majesty of the mundane.

It is immediately evident Wexler is an artist and a brief conversation with this immediately friendly and impossibly kind man inspires others to reach for their dreams challenge the limits of their own creativity and strive for truth and beauty in their own lives.

This personality is reflected in the artist’s works new and old which leave the viewer with a sense of peace calm and inspiration. The subtle emotional appeal of Wexler’s paintings of historic buildings and private moments wrap each viewer in a blanket of nostalgia and intimacy an effect that is both inborn and cultivated in this inspiring and talented painter.

“It’s really just been a fantasy life ” he says. “It really has.”