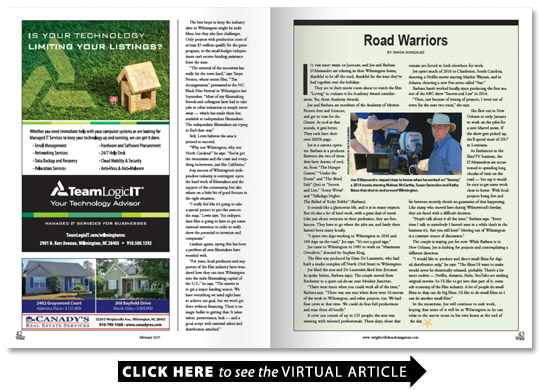 It’s the first week of January and Joe and Barbara D’Alessandro are relaxing in their Wilmington home thankful to be off the road thankful for the time they’ve had together over the holidays.

They are in their movie room about to watch the film “Loving” to evaluate it for Academy Award consideration. Yes those Academy Awards.

Joe and Barbara are members of the Academy of Motion Picture Arts and Sciences and get to vote for the Oscars. As cool as that sounds it gets better. They each have their own IMDb page.

Joe is a camera operator. Barbara is a producer. Between the two of them they have dozens of credits from “The Hunger Games ” “Under the Dome” and “The Blind Side” (Joe) to “Secrets and Lies ” “Army Wives” and “Talladega Nights: The Ballad of Ricky Bobby” (Barbara).

It sounds like a glamorous life and it is in many respects. But it’s also a lot of hard work with a great deal of travel. Like just about everyone in their profession they are freelancers. They have to go where the jobs are and lately there haven’t been many locally.

Joe came to Wilmington in 1985 to work on “Maximum Overdrive ” directed by Stephen King.

The film was produced by Dino De Laurentiis who had built a studio complex off North 23rd Street in Wilmington.

Joe liked the area and De Laurentiis liked him (because he spoke Italian Barbara says). The couple moved from Rochester to a quiet cul-de-sac near Monkey Junction.

“There were times when you could work all of the time ” Barbara says. “There was one year when there were 18 movies of the week in Wilmington and other projects too. We had four crews at that time. We could do four full productions and man them all locally.”

A crew can consist of up to 125 people; the area was teeming with talented professionals. These days those that remain are forced to look elsewhere for work.

Barbara hasn’t worked locally since producing the first season of the ABC show “Secrets and Lies” in 2014.

“Then just because of timing of projects I went out of town for the next two years ” she says.

She flew out to New Orleans in early January to work on the pilot for a new Marvel series. If the show gets picked up she’ll spend most of 2017 in Louisiana.

As freelancers in the film/TV business the D’Alessandros are accustomed to spending long chunks of time on the road — but say it would be nice to get some work close to home. With local projects being few and far between recently there’s no guarantee of that happening. Like many who moved here during Wilmywood’s heyday they are faced with a difficult decision.

“People talk about it all the time ” Barbara says. “Every time I talk to somebody I haven’t seen in a while that’s in the business it’s ‘Are you still here?’ Moving out of Wilmington is a constant source of discussion.”

The couple is staying put for now. While Barbara is in New Orleans Joe is looking for projects and contemplating a different direction.

“I would like to produce and direct small films for digital distribution only ” he says. “The films I’d want to make would never be theatrically released probably. There’s a lot more outlets — Netflix Amazon Hulu YouTube are making original movies. So I’d like to get into that part of it some sub economy of the film industry. A lot of people do small films so they can do big films. I’d like to do small films so I can do another small film.”

In the meantime Joe will continue to seek work hoping that some of it will be in Wilmington so he can relax in the movie room in his own home at the end of the day.