BY by Johanna Ferebee 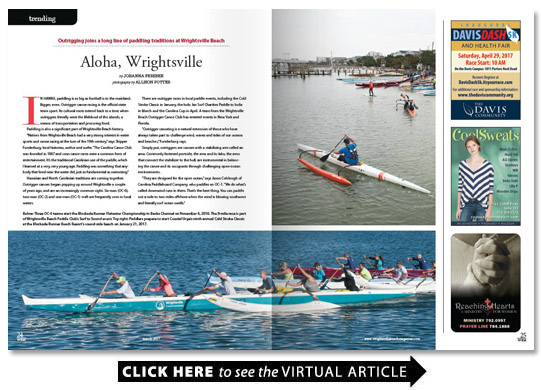 In Hawaii paddling is as big as football is to the mainland. Bigger even. Outrigger canoe racing is the official state team sport. Its cultural roots extend back to a time when outriggers literally were the lifeblood of the islands a means of transportation and procuring food.

Paddling is also a significant part of Wrightsville Beach history.

“Natives from Wrightsville Beach had a very strong interest in water sports and canoe racing at the turn of the 19th century ” says Skipper Funderburg local historian author and surfer. “The Carolina Canoe Club was founded in 1887 and soon canoe races were a common form of entertainment. It’s the traditional Carolinian use of the paddle which I learned at a very very young age. Paddling was something that anybody that lived near the water did just as fundamental as swimming.”

Hawaiian and North Carolinian traditions are coming together. Outrigger canoes began popping up around Wrightsville a couple of years ago and are an increasingly common sight. Six-man (OC-6) two-man (OC-2) and one-man (OC-1) craft are frequently seen in local waters.

There are outrigger races in local paddle events including the Cold Stroke Classic in January the Indo Jax Surf Charities Paddle to India in March and the Carolina Cup in April. A team from the Wrightsville BeachOutriggerCanoe Club has entered events in New York and Florida.

“Outrigger canoeing is a natural extension of those who have always taken part to challenge wind waves and tides of our oceans and beaches ” Funderburg says.

Simply put outriggers are canoes with a stabilizing arm called an ama. Commonly fastened portside the ama and its īako the arms that connect the stabilizer to the hull are instrumental in balancing the canoe and its occupants through challenging open-ocean environments.

“They are designed for the open ocean ” says Jason Colclough of Carolina Paddleboard Company who paddles an OC-1. “We do what’s called downwind runs in them. That’s the best thing. You can paddle out a mile to two miles offshore when the wind is blowing southwest and literally surf ocean swells.”

Outrigger canoes first carved through Hawaiian waters centuries ago when early Polynesian settlers used the stars as their compass and flocks of birds as their guides to find the islands. These original outriggers were massive some large enough to tote nearly 100 migrants with their animals.

Ironically it was a man from the Carolinas who helped transform outrigger canoeing from utilitarian to recreation and sport in Hawaii. Charleston native Alexander Hume Ford founded the Outrigger Canoe Club in Waikiki on the island of Oahu in 1908. The clubhouse was a grass hut on the beach.

Over the years other Carolinians traveled to the islands and gained exposure to this exotic form of canoeing.

“There’s been plenty of people from Wrightsville Beach that have been back and forth that have had experience in outrigger paddling there ” Colclough says.

A cultural pioneer in his own right Barnes reminisces from his second home on the north shore of Oahu.

“Just from having a home here in Hawaii I would always see the outriggers in the afternoons paddle behind my house ” he says. “I kind of fell in love and thought ‘Man that would be an ideal thing for us to have in Wrightsville Beach.'”

Barnes commissioned two Bradley Lightning OC-6s through a friend in California. They arrived in late June 2015 and soon Barnes and a group of friends were gliding through Banks Channel and on the Intracoastal Waterway — even though some of the paddlers had absolutely no clue what they were doing.

Less than a week after the outriggers arrived the novice team paddled by the Fourth of July celebrations that annually take place on Masonboro Island. Barnes remembers being serenaded by college students singing the “Hawaii Five-O” theme song.

At 45 feet long and with its ama reaching down into the water the outrigger was hard to miss.

“Everywhere I would go around town people would tell us that they wanted to try it ” Barnes recalls. “We wanted to do it all the time.”

With more people wanting to paddle than seats between the two canoes Jarrod Covington owner and founder of Wrightsville SUP purchased an OC-6 of his own.

Covington recalls these maiden voyages with strong affection. It takes time patience and deep camaraderie to synchronize strokes in a graceful manner. When it clicks the entire entity becomes a singular organism with every misstep felt by all.

“The time in the boat is what it’s all about ” Covington says. “We’ve improved vastly from our first paddle.”

Emily Deisroth caught wind of the growing outrigger colony in Wrightsville from Fayetteville where her husband Robert was serving at Fort Bragg. The family had belonged to the New Hope Canoe Club when Robert was stationed in Hawaii. Her son Harrison was a competitive outrigger after several years of experience with first-class competition in Hawaii and California.

The Deisroth family relocated to Wrightsville Beach in January 2016 and soon met Covington Barnes and the rest of the blooming outrigger clan. The flourishing team realized it was time to formalize a quickly growing movement. The Wrightsville Beach Outrigger Canoe Club (WBOCC) was born with Emily Deisroth as president fostering participation and community.

“If you have a club it can become an accessible sport ” Deisroth says. “If there’s no club environment there’s no real community being formed.”

The WBOCC invites interested paddlers to paddle free of charge for the first time allowing for accessibility as an OC-6 can cost anywhere from $15 000 to $50 000. If they want to continue they can pay per outing or become a member and participate in regular club activities.

“When you have a club you can alternate and everybody has a chance to paddle ” Colclough says. “That’s a really affordable way to get exposure. People who aren’t comfortable going into the ocean themselves if they get into a six-man crew there’s a comfort level there.”

Single-seat outriggers are also popular. Carolina Paddleboard Company has received more than 100 boats since late 2015 and sold them all.

“Let’s face it. It’s cooler than a kayak right?” Colclough says. “Paddling standup is super fun. It’s just different. Anytime you can add a different layer of complexity to something that’s so technique-based as paddling it makes you overall a far better paddler. Some of the best standup paddlers in the world come from an outrigger background. That technique has a direct correlation from one to the other.”

There is a learning curve for new paddlers even those coming from a canoe background.

“It’s not super stable ” Colclough says. “The bottom is really round. You can use the ama as a means to balance but if you lean on it you’re creating drag and it slows it down. If you’re riding a bump it will cause the boat to pull to the left. If you are centered and balanced appropriately the ama is just barely touching the water.”

New paddlers are encouraged to not just learn how to technically paddle the canoes but also to be mindful of Hawaiian traditions and treat them with respect and dignity.

Johnny Puakea an elite paddler as well as an outrigger designer has spread the Hawaiian tradition in Wrightsville Beach during various trips to the area as has champion outrigger and local surf legend Rich Lambert. They and other experienced paddlers have dutifully made sure East Coast rookies honor the spirit of ohana or family before hitting the water.

“When you’ve been taught the tradition in Hawaii it’s your responsibility if you’re going to open it up to another community ” Deisroth says.