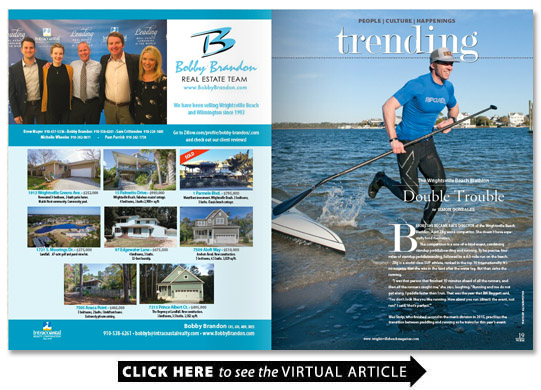 Before she became race director of the Wrightsville Beach Biathlon April Zilg was a competitor. She doesn’t have especially fond memories.

Zilg is a world-class SUP athlete ranked in the top 10 internationally. It’s no surprise that she was in the lead after the water leg. But then came the running.

“I was that person that finished 10 minutes ahead of all the runners and then all the runners caught me ” she says laughing. “Running and me do not get along. I paddle faster than I run. That was the year that Bill Baggett said ‘You don’t look like you like running. How about you run (direct) the event not run?’ I said ‘that’s perfect.'”

Baggett is the co-owner of the Blockade Runner Beach Resort the Wrightsville Beach hotel that puts on the event scheduled this year for March 18. This will be the seventh biathlon and Zilg’s third as race director.

“Biathlon” originally meant an event featuring cross-country skiers carrying guns still a staple of the Winter Olympics. The challenge is to ski like mad stop at various points along the course and control the heartbeat and respiration enough to shoot and hit the targets.

“Even runners will admit that running on the sand isn’t the easiest especially after you get off the water ” says biathlon competitor Sandy Mitofsky Robbins. “For me that’s the case even though I’m a runner. It’s definitely a challenge.”

It might be tough but Robbins a member of area paddleboard and running groups says it’s the perfect event for this area.

“It’s a great opportunity for the running community and the paddling community to come together ” she says. “I do it for the camaraderie. I love events like this so runners can see there is a group of paddleboarders. There’s a lot of synergy between the two groups. Paddleboarding is great for your core muscles and running is cardio. There’s such a benefit to doing both for all-around fitness. It’s great cross-training.”

Zilg loves hearing such sentiments. Although there are divisions for men women and teams with awards for the top finishers the emphasis is not on competition.

“It’s really just to have fun ” she says. “The original organizers thought it would be a great way to spread standup paddleboarding in the athletic community. We’ve got a lot of runners we want to expose them to a new sport. The extreme explosion in SUP growth has tapered off so now it’s about bringing the community together. We’ve got excellent runners we’ve got excellent paddleboarders let’s get together let’s do a little paddle-run race raise some money for a good cause (the North Carolina Coastal Federation) and have fun.”

Still it is a competition and top athletes will be vying for the prizes. Who then has the edge? Zilg the paddleboarder suggests runners do because they can make up ground once they hit the beach.

“Paddleboarding is really slow so you actually stand to make up more on the run ” she says. “I’ve seen people hit the beach up to five minutes behind and totally close that gap in the run. That’s very normal. I think the runner will probably do better.”

Wrightsville Beach resident Amanda Jacobs isn’t so sure. Jacobs a competitive runner and Boston Marathon qualifier runs the beach every day and paddles recreationally. It sounded like an ideal event so she signed up a couple of years ago. But when the paddleboard leg started she was left behind at the starting line.

“It was so windy ” she says. “I wasn’t making any progress. It was awful. People were so far ahead of me in such a short time. When I got on the beach most people were finished with the run. I did pass some people. But it was so hard. For days I couldn’t lift my arms they hurt so bad.”

Robbins who has a top-five finish to her credit says specialists in either sport typically aren’t the first across the finish line.

“The winners will be those who are strong at both ” she says.

Zilg suggests the real winners are the competitors who appreciate being in a coastal community where the weather is nice enough to keep people on the water and on the roads year-round.

“It’s a good warm-up season race for everybody to show off their training ” she says.