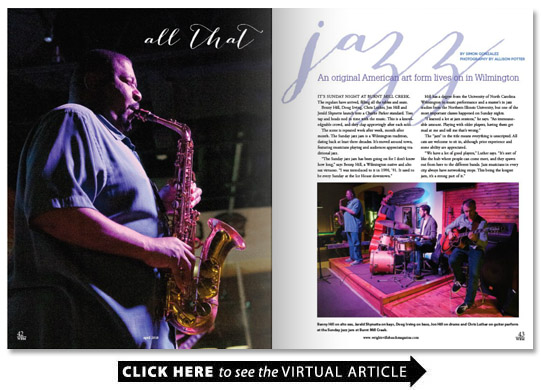 It’s Sunday night at Burnt Mill Creek. The regulars have arrived filling all the tables and seats.

Benny Hill Doug Irving Chris Luther Jon Hill and Jerald Shynette launch into a Charlie Parker standard. Toes tap and heads nod in time with the music. This is a knowledgeable crowd and they clap approvingly after each solo.

The scene is repeated week after week month after month. The Sunday jazz jam is a Wilmington tradition dating back at least three decades. It’s moved around town featuring musicians playing and audiences appreciating traditional jazz.

“The Sunday jazz jam has been going on for I don’t know how long ” says Benny Hill a Wilmington native and alto sax virtuoso. “I was introduced to it in 1990 ’91. It used to be every Sunday at the Ice House downtown.”

Hill has a degree from the University of North Carolina Wilmington in music performance and a master’s in jazz studies from the Northern Illinois University but one of the most important classes happened on Sunday nights.

“I learned a lot at jam sessions ” he says. “An immeasurable amount. Playing with older players having them get mad at me and tell me that’s wrong.”

The “jam” in the title means everything is unscripted. All cats are welcome to sit in although prior experience and some ability are appreciated.

“We have a lot of good players ” Luther says. “It’s sort of like the hub where people can come meet and they spawn out from here to the different bands. Jazz musicians in every city always have networking stops. This being the longest jam it’s a strong part of it.”

There’s rarely any sheet music. The songs are memorized — Hill estimates he has a catalog of about 1 000 in his brain “although I don’t know as many as I should ” he says. If the players don’t know all the notes that’s OK because real jazz is all about improvisation.

Hill is always busy teaching at Cape Fear Community College and gigging about four nights a week. But he wouldn’t miss Sundays at Burnt Mill Creek.

“This is our fun night ” he says. “It’s a jam session which is traditionally how jazz was formed. It’s just getting together and playing.”

This is the kind of music in the kind of club that Sebastian the fictional jazz pianist portrayed by Ryan Gosling in the 2016 movie “La La Land ” infamously declared to be dying.

Primus Robinson president of the Cape Fear Jazz Society shakes his head at the reference.

“Give me a break ” he says. “It’s not dying. It’s not going anywhere. Jazz is always transitioning. There is good music breaking through all the time. There are new artists searching for a voice and there’s always somebody who wants to hear it. It’s always exploratory. Open minds want exploratory music and that’s basically what jazz is.”

Measured strictly by consumption Sebastian might have a point. Rock and R&B/hip-hop vie for the most popular music genre each accounting for about 25 percent of album sales and streams in 2017. Jazz checked in at 1.2 percent down there with classical and just ahead of world and children’s music.

But in Wilmington at least the jazz scene is quite healthy.

“For the size the town it is I think it’s good ” Hill says. “We have a good core of great players in town.”

There are big bands like Artistry in Jazz and the Wilmington Big Band and numerous smaller combos.

There are events throughout the year. The North Carolina Jazz Festival celebrated its 38th year in Wilmington in January. The Ocean City Jazz Festival happens in July. The Pleasure Island Seafood Blues and Jazz Festival takes place each October. National acts play the Wilson Center Thalian Hall and Kenan Auditorium.

The Cape Fear Jazz Society books local and regional acts for concerts at the Cameron Art Museum and the Bellamy Mansion throughout the year.

“We are looking far and wide for new artists to intersperse with the known artists in the area ” Robinson says. “We’re never going to turn down Doug Irving or Benny Hill. They are great and they support this community. But we are running as far as our budget will take us to find those artists in the Triangle area and Charlotte and Charleston to find diversity.”

“When they hired me I said we should do more programming on the back lawn and I like jazz and I’d like to start a jazz concert series ” says Gareth Evans executive director of the Bellamy Mansion. “We get between 80-120 people depending on the concert and the weather. This town is surprisingly jazzy for a little place. I’m impressed.”

A dedicated fan can catch live jazz at least a couple of times a week. There’s the Sunday night jam. Luther the guitarist at Burnt Mill Creek leads a gypsy jazz trio called Caf� Nouveau at the Platypus and Gnome on Fridays. Jon Hill the drummer at Burnt Mill Creek on Sundays plays in another jam session on Tuesdays at New Anthem. There are regular jazz gigs at Rucker Johns Dram and Morsel and Ted’s Fun on the River. Kenan Chapel in Landfall has a jazz series.

“There are lots of venues in this town ” says Jim McFayden bass player and leader of the Wilmington Big Band. “I feel like this town has open arms for musicians. The audiences around here seem to love and welcome all kinds of music. It’s an educated audience here which is so nice.”

In addition to his role with the big band McFayden plays in a Dixieland group that has a regular monthly gig at Rucker Johns.

His wife Laura is the vocalist for the big band and with her smaller combo Stardust.

“We’re lucky to live in Wilmington where jazz is very much alive ” she says. “This is such an artistic town. Maybe this isn’t like the real world.”

Reality can be relative though. Or perhaps quantitative. Yes jazz is alive in Wilmington but jazz is still a niche genre. There are people in town who love the music but they are in the minority and they don’t attend every gig by every band.

“There are some really good players and some really good venues but there’s not that many gigs available ” says Julia Walker Jewell a jazz composer pianist and vocalist who plays in two bands her jazz quintet and the Port City Trio which plays music from the Great American Songbook. “Everybody is playing the same gigs. You are going to hear somebody you’ve heard before. Is that healthy? I’m not sure it is.”

Walker Jewell and her husband Kelly own and operate Ted’s Fun on the River.

“I play jazz at Ted’s. But if I didn’t own the club I wouldn’t have many places to play ” she says. “And if we only booked jazz at Ted’s we wouldn’t make it. We have to mix in blues and bluegrass and Americana.”

In other words even the most talented players shouldn’t quit their day jobs.

“There aren’t a lot of ways for jazz musicians to make it here ” says Walker Jewell whose regular job is director of music at Wrightsville United Methodist Church.

Hill who recently took the teaching job at Cape Fear Community College is one of the few who makes his living solely from jazz.

“It’s hard ” he says. “For a long time all I did was play. I taught part-time but that didn’t pay much money at all. It’s a lot because you do everything yourself. Find gigs hunt them down book them do your own promotion hire bands for events like weddings. Each one is different. And you have to find time to practice. It’s a lot. It can be stressful.”

Jim McFayden has similar challenges finding gigs along with the responsibility of paying the 17 musicians who make up the Wilmington Big Band. But the band members who range in age from “high school kids to guys in their 70s and 80s” are in it for the joy of the music rather than the reward.

“The money is nice but you are up there for the passion ” McFayden says. “It’s a privilege.”

Swing music played by big bands led by the likes of Duke Ellington Glenn Miller Jimmie Lunceford and Benny Goodman topped the charts in the ’30s and ’40s.

“The greatest generation folks that are my mom’s age and Jim’s mom’s age this music means so much to them ” Laura McFayden says.

But her favorite moments come when she sees children dancing to the music.

“You know you are successful when kids run out and jump around and play ” she says. “You know you are reaching them. There are a lot of kids who have never seen this who are interested in the instruments and the music. It’s a wonderful feeling to introduce this to a new generation.”

That’s a common theme among jazz musicians. Whether trying to make a living at it or playing for the passion and privilege there’s a shared responsibility to make sure Sebastian’s words never come to pass to ensure the art form stays off life support.

“Maybe in some small way we are charged with that ” Jim McFayden says. “And we are honored to be charged.”

Jazz is the most American art form — “the world’s other classical music ” Robinson says.

It originated about 100 years ago in New Orleans where a fusion of European colonial roots and African influences from the slavery era produced a new kind of music played by legends like Buddy “King” Bolden Sidney Bechet and Jelly Roll Morton. Jas as it was then known spread around the country and around the world.

Preserving that history is always lurking somewhere in the back of the mind of most jazz musicians.

“I think it’s an important part of the heritage and tradition of this music ” Hill says.

The Sunday jazz jam touches on many of those styles but perhaps the best term is pure jazz played for the pure joy of it.

“Sunday is the night when we can put a little air in the horn turn the amps up a little bit louder hit the drums a little bit harder ” Hill says. “Sunday night is our fun night of the week. It’s just getting together and playing. That’s why I do it.”