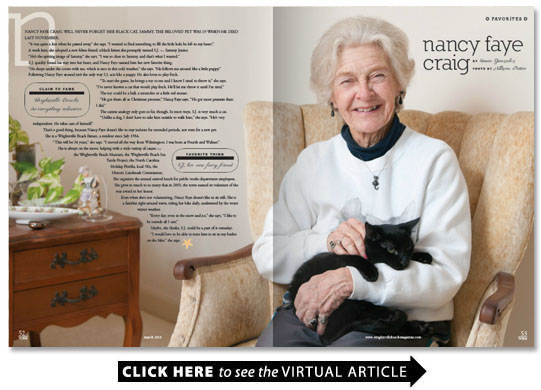 Nancy Faye Craig will never forget her black cat Sammy. The beloved pet was 19 when he died last November.

“It was quite a loss when he passed away ” she says. “I wanted to find something to fill the little hole he left in my heart.”

“He’s the spitting image of Sammy ” she says. “I was so close to Sammy and that’s what I wanted.”

S.J. quickly found his way into her heart and Nancy Faye named him her new favorite thing.

“He sleeps under the covers with me which is nice in this cold weather ” she says. “He follows me around like a little puppy.”

Following Nancy Faye around isn’t the only way S.J. acts like a puppy. He also loves to play fetch.

“To start the game he brings a toy to me and I know I need to throw it ” she says. “I’ve never known a cat that would play fetch. He’ll let me throw it until I’m tired.”

The toy could be a ball a scrunchie or a little red mouse.

“He got them all as Christmas presents ” Nancy Faye says. “He got more presents than I did.”

The canine analogy only goes so far though. In most ways S.J. is very much a cat.

“Unlike a dog I don’t have to take him outside to walk him ” she says. “He’s very independent. He takes care of himself.”

That’s a good thing because Nancy Faye doesn’t like to stay indoors for extended periods not even for a new pet.

She is a Wrightsville Beach fixture a resident since July 1984.

“This will be 34 years ” she says. “I moved all the way from Wilmington. I was born at Fourth and Walnut.”

She is always on the move helping with a wide variety of causes — the Wrightsville Beach Museum the Wrightsville Beach Sea Turtle Project the North Carolina Holiday Flotilla local 5Ks the Historic Landmark Commission. She organizes the annual catered lunch for public works department employees. She gives so much to so many that in 2003 the town named its volunteer of the year award in her honor.

Even when she’s not volunteering Nancy Faye doesn’t like to sit still. She is a familiar sight around town riding her bike daily undeterred by the worst winter weather.

“Every day even in the snow and ice ” she says. “I like to be outside all I can.”

Maybe she thinks S.J. could be a part of it someday.

“I would love to be able to train him to sit in my basket on the bike ” she says.