A Celebration of Christmas 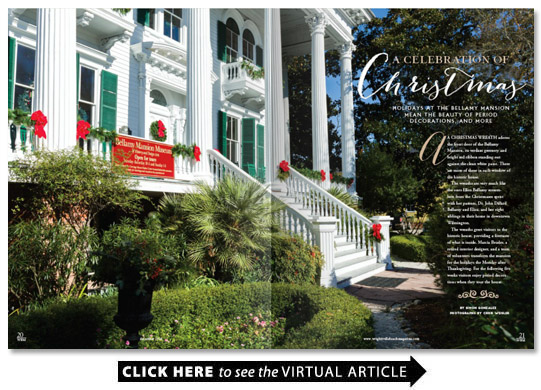 A Christmas wreath adorns the front door of the Bellamy Mansion its verdant greenery and bright red ribbon standing out against the clean white paint. There are more of these in each window of the historic house.

The wreaths are very much like the ones Ellen Bellamy remembers from the Christmases spent with her parents Dr. John Dillard Bellamy and Eliza and her eight siblings in their home in downtown Wilmington.

The wreaths greet visitors to the historic house providing a foretaste of what is inside. Marcia Bruder a retired interior designer and a team of volunteers transform the mansion for the holidays the Monday after Thanksgiving. For the following five weeks visitors enjoy period decorations when they tour the house.

“We want it to look good and festive ” says Gareth Evans executive director of the Bellamy Mansion Museum. “We want people to enjoy it.”

Bruder’s decorating challenge is to make the historic building look festive while keeping to the mandate of using materials that would have been available in 1860 when the Bellamys moved into their new home in downtown Wilmington.

She took on the task five years ago after moving to Wilmington from Miami where part of her business was creating holiday d�cor.

“I’ve always had a love of older things that had a history so this was easy for me ” she says.

It was an easy decision for her to get involved but difficult to beautify the building in the way it might have looked in the 1860s.

There is a little information available in “Back with the Tide ” Ellen Bellamy’s memoirs of her time in the mansion and the period.

“Ellen Bellamy mentions some of the ways they decorated the house ” says Wade Toth chair of the volunteer committee. “There was a green wreath on the door and green wreaths in each window.”

Beyond that there isn’t much known about how the house was decorated or how the Bellamys would have celebrated Christmas so Bruder looked into the period.

“I did a lot of research and I latched onto anything that I could make for the first year. Every year I learned a little more.”

One of the things she learned is that while brown hard and spiky sweetgum balls tend to be a nuisance for residents of the Cape Fear region they can be useful treasures.

“I try to work with found objects in the area ” she says. “Sweetgum balls can be the bane of your existence if you’ve got them but I use them to make garland.”

The balls are fair game to use because they were around back then. Felt was also so that’s the material used for the stockings that hang on the mantle over the fireplace in the parlor. Other fabrics candles toys and material from the period abound.

“I use velvet tapestries and fabrics that would have been available ” Bruder says. “I create cornucopias. They would have done that back then.”

Wealthy families of the day also would have allowed their slaves some latitude to decorate so the slave quarters behind the Bellamy Mansion are part of the tour.

“We do them rather sparsely ” Toth says. “We know a little bit about how things might have been done. We put some greenery on the mantles. A volunteer made burlap stockings. We put candles in the windows. It’s pretty spartan. It would not have been decorated in much of any way.”

Gift giving was a part of Christmas celebrations in the 1860s and is represented in the mansion’s holiday decor.

“One of the things we do know is that adult gifts were placed under Christmas trees and children’s gifts were on the trees ” Toth said. “Stockings were being used. In the pre-Civil War period a slave wrote about going into the house and hanging stockings for the family.”

Thanks to Ellen Bellamy’s book it’s also known there would have been a Christmas tree.

“She does mention a Christmas tree ” Toth says. “Christmas trees back in those days were tabletop trees. It wasn’t until the 1900s you saw trees standing on the floor.”

A tabletop tree in the parlor is one of eight in the house although most of them are floor standing. The decorators know that might not be quite historically accurate but they are allowed some license to stray from the way the mansion looked in 1860.

“As I started to dig into this I realized it was limiting and it would be dull ” Bruder says. “This was the end of a war and they didn’t have much stuff to work with. If we wanted to draw people in to see the house we had to do more. We work with the materials they had and combine them in ways they might not have. They might not have done it but they could have.”

The quantity of decorations likely would not have been seen at the end of the Civil War in the Victorian era but the result is something that while opulent is still tasteful.

“It’s not kitschy but it’s a little more than they would have done ” Evans says. “They wouldn’t have gone quite as nuts as we do today. The Victorian era is a weird period. They were kind of buttoned down but a family like that with their money would have had the best.”

Another challenge for Bruder and the volunteers is to keep it fresh for returning visitors to not simply repeat what was done the year before.

In 2015 that meant keeping the main and downstairs levels true to the historic period but adding new exhibits on the upper level.

“Last year it was probably Victorian on steroids ” Evans says. “Somebody brought in toy soldiers. They might have had that in the Victorian period but these were big ones. The parlor is reasonably authentic. The bedrooms are a little more FAO Schwarz I suppose.”

Bruder might not go that far but she admits she did have some fun creating theme rooms that will greet visitors again this year.

“One room has angels another has Santas another is about music another is decorated with chandeliers ” she says. “It’s just a celebration of Christmas.”