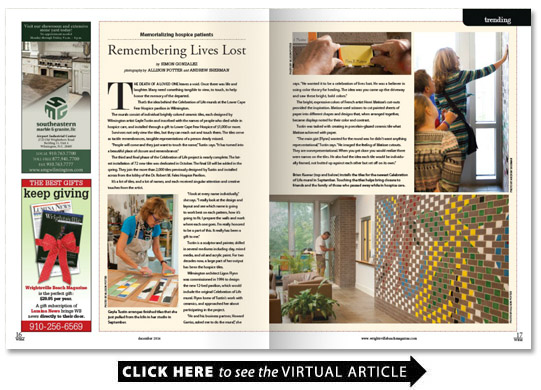 The death of a loved one leaves a void. Once there was life and laughter. Many need something tangible to view to touch to help honor the memory of the departed.

That’s the idea behind the Celebration of Life murals at the Lower Cape Fear Hospice pavilion in Wilmington.

The murals consist of individual brightly colored ceramic tiles each designed by Wilmington artist Gayle Tustin and inscribed with the names of people who died while in hospice care and installed through a gift to Lower Cape Fear Hospice of $1 000 or more.

Survivors not only view the tiles but they can reach out and touch them. The tiles serve as tactile remembrances tangible representations of a person dearly missed.

“People will come and they just want to touch the name ” Tustin says. “It has turned into a beautiful place of closure and remembrance.”

The third and final phase of the Celebration of Life project is nearly complete. The latest installation of 72 new tiles was dedicated in October. The final 58 will be added in the spring. They join the more than 2 000 tiles previously designed by Tustin and installed across from the lobby of the Dr. Robert M. Fales Hospice Pavilion.

It’s a lot of tiles and a lot of names and each received singular attention and creative touches from the artist.

“I look at every name individually ” she says. “I really look at the design and layout and see which name is going to work best on each pattern how it’s going to fit. I prepare the walls and mark where each one goes. I’m really honored to be a part of this. It really has been a gift to me.”

Tustin is a sculptor and painter skilled in several mediums including clay mixed media and oil and acrylic paint. For two decades now a large part of her output has been the hospice tiles.

Wilmington architect Ligon Flynn was commissioned in 1996 to design the new 12-bed pavilion which would include the original Celebration of Life mural. Flynn knew of Tustin’s work with ceramics and approached her about participating in the project.

“He and his business partner Howard Garriss asked me to do the mural ” she says. “He wanted it to be a celebration of lives lost. He was a believer in using color theory for healing. The idea was you came up the driveway and saw these bright bold colors.”

The bright expressivecolors of French artist Henri Matisse’s cut-outs provided the inspiration. Matisse used scissors to cut painted sheets of paper into different shapes and designs that when arranged together became displays noted for their color and contrast.

Tustin was tasked with creating in porcelain-glazed ceramic tile what Matisse achieved with paper.

“The main gist [Flynn] wanted for the mural was he didn’t want anything representational ” Tustin says. “He imaged the feeling of Matisse cutouts. They are nonrepresentational. When you get close you would realize there were names on the tiles. He also had the idea each tile would be individually framed not butted up against each other but set off on its own.”

Tustin began work on the original Celebration of Life mural in 1996. It took nine years to complete the installation of 1 176 tiles.

The second phase came along with an expansion of the wall in 2005. She installed the 450 tiles over two and a half years.

When the Fales Pavilion itself was expanded and renovated to add a six-bed wing in 2014 Tustin went back to work on Phase 3.

Flynn had died in 2010 but Tustin stayed true to their original vision when it came to the latest iteration.

She starts with a tile made of Flemish bond brick. She lays it on a table in her studio and sketches out the design. Paint is added and the tile is fired twice. After the second time she adds the name with paint that’s used for fine china and then fires a third time.

“The name sinks in; it’s permanent ” she says.

Creating a memorial for people who died while in hospice care was meaningful from the beginning. In 2007 it became personal.

Her husband Vince Griffin was diagnosed with bile duct cancer in March of that year. He passed away at the Fales Pavilion in November.

Tustin dedicated a tile of her own in memory of Vince the following April.

“I lost my husband. And I have many friends up there ” she says.

She knows what it means to see the name of a loved one on the wall to reach out and touch the tile to have something tangible as a memorial.

“I’m very honored to be part of this ” she says. “I’m very touched. I see this as closure for a lot of people.”