As the chips fly through the air the gulls anticipate a mid-morning snack. After a while Donaldson and his wife Jean pack up to leave and the gulls descend. “You could see them spitting out the chips as we walked away ” chuckles Donaldson.

The gulls may be disappointed but thats not true of Donaldsons friends who vie for a gift of one of his seashell carvings or his fans an oversized whelk shell lovingly carved out of walnut won him a Blue Ribbon from the Senior Games by the Sea competition at the Wilmington Senior Center. 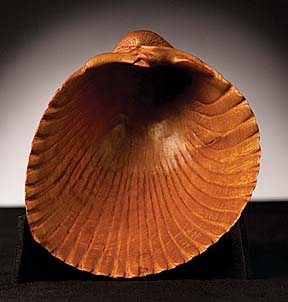 Donaldson is no stranger to the wonders of woodworking having dabbled in furniture-making in his basement in Cincinnati but his real love for the art blossomed when he moved to Wilmington 10 years ago and discovered the Cape Fear Woodcarvers Club.

When Donaldson started attending the clubs weekly meeting at Poplar Grove Plantation he knew he was home. He enjoyed the community of people from all walks of life who shared his love of the craft and gave him encouragement and camaraderie.

His first projects were animal carvings. Then over the last two years he began creating his shell series an inspiration from his forays onto Wrightsville Beach. He and Jean are huge WB fans. They found Wrightsville after years of going up and down the coast in search of the perfect spot to retire. When they found our little corner of heaven they stopped looking. And the beach paid him back by offering gifts from the sea to lure him to work. “I love the beach and the carving is part of that enjoyment ” Donaldson says his blue eyes twinkling.

The shells have inspired dozens of sculptures conches sand dollars cone shells. Unlike many carvers Donaldson works only with hardwood as he is hooked on the vibrant grain and the soft sheen of the surface after a coat of natural oil finish. He creates the pieces carved to scale or slightly oversized from local wood mostly cherry or holly. But if he gets a gift as he did from his son in Cincinnati of a huge block of walnut he wont refuse it! Donaldsons friends also know that if you chop down a holly tree or if a cherry gets destroyed in a storm he can work his magic on the destroyed trunk.

Everyone gets into the act even his builder made a donation of a huge piece of cherry wood left over after a mantel project. “Its amazing ” remarks Donaldson “how people show interest in what youre doing.”

The process itself is straightforward. He may start out with a block as big as four feet in length and 18 inches in diameter. He uses a chain saw in his garage to block out the piece. He then uses a band saw and a hand grinder to rough out the shape defining the spirals and curves of his delicate pieces. The actual template is a heavy paper model of the front side and top of the shell. Sometimes hell use clay models or sketches to aid in the process. Then he uses a knife to produce the detail that highlights the texture of the shell.

After he completes the carving Donaldson brings out his files and sandpaper to perfect the surface. He uses the fine sandpaper applied in automobile refinishing to get the smooth polished look that is his trademark. Finally he puts on several coats of wood polishing oil which sink into the surface. A final hand rub of the surface and the shell is complete.

The process can take anywhere from eight to 40 hours depending on the size and complexity of the shell. “It takes almost as much time to smooth them and polish them as it takes to carve them ” Donaldson says. “Its a fine delicate process.” 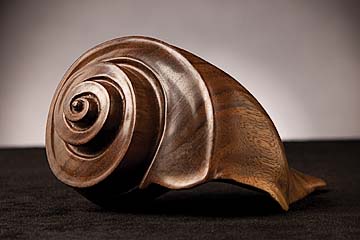 The finished product is worth the effort. The shells look like the real thing as Donaldson does his homework on each piece. His Porters Neck studio/office is lined with bookshelves crammed with books about subjects like national wildlife refuges and shore birds. These are stacked neatly alongside Home Depot catalogs and years worth of Chit Chats the National Wood Carvers Association publication.

“I started to learn about shells because you do a lot of research when youre doing carving. I bought books and studied them. It becomes an educational activity ” he says.

Donaldson discovered this natural talent late in life. As a young man he was more interested in sports than in creative endeavors. “I wonder if maybe there might have been some of that (creative talent) in me that I just didnt recognize or somebody else didnt recognize in me ” he muses.

During his pre-retirement years he worked in marketing sales and product management in the pharmaceutical industry. He worked 20 years for Pfizer in New York and then Merrell Dow lured him to Cincinnati where he helped rear his children. He consulted with GlaxoSmithKline in Raleigh after his tenure in Cincinnati but soon had his fill of the business world. He tires of the subject of his past life quickly. “I enjoy too many things. I needed to get away ” he says with conviction.

His excitement level ramps right back up when he starts talking about his new passion. He loves the adventure of finding out what is “inside” a piece of wood or stone. “Its waiting for you to find ” he says playfully. “It comes out.” Its the pleasure of the experience that keeps him coming back for more. He doesnt sell his pieces but instead gives them away to friends as mementos of their time spent together.

Bills venture into professional-quality carving is a lot like the pieces he produces. There is a creation there just waiting to reveal itself. As he thinks about the work he produces he laughs “It (the talent) gradually emerged or invaded me. I dont know whether it came from the inside or the outside!”

Its always a good day when you bump into the Donaldsons at the beach. If you catch the shell carver after he finishes body surfing youre in for a treat watching him work with a piece of wood. Just brush the seagulls aside!