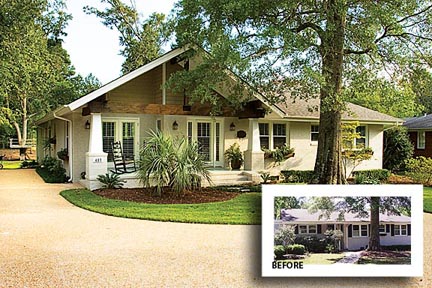 Kristina Edgerton shopped the Wilmington real estate market looking at 200 houses in two years before coming home to Wayne Drive the address that she and husband Clyde had called home since Valentines Day 2003. With the addition of three stair-step youngns Nathanial 4 Ridley 2 and 1-year-old Truma the couple was growing out of their three-bedroom by leaps and bounds. All they wanted was a guest room and maybe a slightly larger kitchen and some kind of sunroom in place of the screened porch oh and to save their fireplace. “I was ready to go back to the Triangle ” Kristina jokes. That was before she toured an Arts and Crafts bungalow cottage then owned by Tongue and Groove builder Mark Batson and his wife Kelly and saw the potential for what she already had. The Edgertons hired Batson giving him free reign to remodel their 1953 Forest Hills brick ranch.

Clyde Edgerton pilot war hero banjo picker and one of the reigning voices in Southern literature (author of the recently released The Bible Salesman) had been relegated to work on an old-fashioned laptop. “My office was there ” Edgerton says drily pointing to a corner of the living room sofa.

Batson ripped off the rear wall of the house and created a 2 000-square-foot wing softened by bungalow styling truncated wood columns and flower boxes on the outside seamlessly matching new brick to old adding beaded-board vinyl to the ceiling and painting the cement floors a Carolina blue reversing the tradition that is most often associated with painting a porch ceiling. 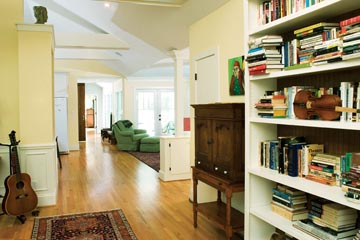 On the backside Batson added an elevated open deck with built-in benches industrial stainless-steel railings uncovered walkways and an ample set of steps leading to the open backyard and the childrens tree house.

The Edgerton interior was blown away. Preserving the original bedroom wing the living area received a new music parlor and dining room for the grownups an open kitchen for the family a rumpus room for the kids a master bedroom wing and a bona fide office for Clyde.

“I wanted to go through clothes and through a closet to get away ” Edgerton says widening his blue eyes for emphasis. “You can drive 10 or 15 miles or you can kind of crawl through something and both experiences make you feel like youre far away. So thats what I was shooting for with that office back there travel back and move through.”

The writers closet takes a pass through the couples walk-in by way of parting a sea of soft blue denim shirts to reach a secret door that opens into a sparely furnished sound-proofed room that overlooks the lower 40. A relic Royal typewriter sits on an old dining room table crammed into the corner.

Edgerton says “I can close the door and really get along.” The trusty Royal he says provokes an altogether different writing experience and requires an altered thought process. “Youre not going to be able to come back and erase it. Its a slightly slower pace that causes the sentences to be a little better first time around I think ” he says. “Youve got to pick while youre writing a little bit. That changes it makes it a little more solid kind of where the rubber meets the road.” 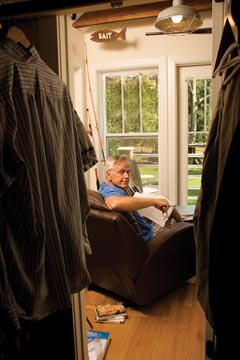 In the tiny office Edgerton writes on the Royal and sometimes on a computer surrounded by an airplane propeller a stuffed toy monkey framed photos of himself with his muses favorite female ancestors and a choice handful of books by other authors. Above his head is an open loft where hes shoved some boxes.

“Mark right away said Do you need a trap door? and I said Yeah and I dont know why I needed a trap door back there but he kind of insisted on that ” Edgerton says. That and a separate door to the outside level where he can clear his head or gaze off into the woods of Forest Hills one.

Batson who shares the gift of imagination with his clients insisted on a lot of things throughout the design-as-you-build process. “Mark kind of stepped in and made decisions which was nice ” Edgerton says. “We trusted his decision. He would take the idea and he never asked he would either talk to me or Kristina and get his way. He figured out who was easier which one was leaning in the direction he wanted hed kind of go with that. He knew how to work it. He even knew when to be quiet.”

Some of the extras that Batson installed without seeking consensus were the artistic details that embroider the texture of Craftsman style onto the vernacular ranch frame: diagonally laid boards on the backside deck and the exposed beamed ceiling where Edgerton expected to see columns.

“Im really glad now ” Edgerton says “but there was no consultation or anything like that. Its kind of funny nearly everything he says is funny it was kind of interesting how it went smoothly.”

After Kristina puts Truma down for a nap she and Clyde sit out back and watch the boys run off for a tree-house romp. “Our neighbors have three boys that are about this age ” Kristina says. “Its just great to be back and play again.”

“We were stuck in a little place without a backyard ” Edgerton adds. “These steps back here are built as kind of a room theyre extra wide and each one is extra long. Now we just sit on the steps and can picnic and watch the kids. Rather than a transition its part of the house.”

“Ridley ” Kristina yells. “Get down ” the couple sings in unison.

The property rolls back to the tallest pine tree where the neighbors own an adjoining pond. A blue heron comes and fishes this pond full of flower blossoms in the spring.

“Were just as thrilled with our backyard and how its evolved as we are with the house ” Kristina says. “What Im proudest of the most ” she adds “is that it doesnt look like its trying to be something that its not.”