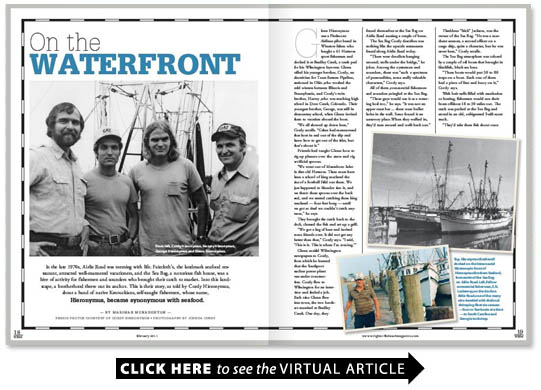 In the late 1970s Airlie Road was teeming with life. Faircloths the landmark seafood restaurant attracted well-mannered vacationers and the Sea Bag a notorious fish house was a hive of activity for fishermen and sounders who brought their catch to market. Into this landscape a brotherhood threw out its anchor. This is their story as told by Cordy Hieronymus about a band of native Kentuckians self-taught fishermen whose name Hieronymus became synonymous with seafood.

Glenn Hieronymus was a Piedmont Airlines pilot based in Winston-Salem who bought a 41 Hatteras sport fisherman and docked it at Bradley Creek a crash pad for his Wilmington layovers. Glenn called his younger brother Cordy an electrician for Texas Eastern Pipeline stationed in Ohio who worked the cold winters between Illinois and Pennsylvania and Cordys twin brother Harvey who was teaching high school in Dove Creek Colorado. Their youngest brother George was still in elementary school when Glenn invited them to vacation aboard the boat.

“We all showed up down here ” Cordy recalls. “Glenn had maneuvered that boat in and out of the slip and knew how to get out of the inlet but thats about it.”

Friends had taught Glenn how to rig up planers over the stern and rig artificial spoons.

“We went out of Masonboro Inlet in that old Hatteras. There must have been a school of king mackerel the size of a football field out there. We just happened to blunder into it and we threw these spoons over the back end and we started catching these king mackerel four feet long until we got so tired we couldnt catch anymore ” he says.

They brought the catch back to the dock cleaned the fish and set up a grill.

“We got a keg of beer and invited some friends over. It did not get any better than that ” Cordy says. “I said This is it. This is where Im coming.”

Glenn mailed Wilmington newspapers to Cordy from which he learned that the Southport nuclear power plant was under construction. Cordy flew to Wilmington for an interview and landed a job. Each time Glenn flew into town the two brothers reunited at Bradley Creek. One day they found themselves at the Sea Bag on Airlie Road nursing a couple of beers.

The Sea Bag Cordy describes was nothing like the upscale restaurants found along Airlie Road today.

“There were derelicts hanging around; trolls under the bridge ” he jokes. Among the oystermen and sounders there was “such a spectrum of personalities some really valuable characters ” Cordy says.

All of them commercial fishermen and sounders mingled at the Sea Bag.

“Those guys would use it as a watering hole too ” he says. “It was not an upper crust bar … there were bullet holes in the wall. Some found it an unsavory place. When they walked in theyd turn around and walk back out.”

Thaddeus “Stick” Jackson was the owner of the Sea Bag. “He was a merchant seaman a second officer on a cargo ship quite a character but he was never here ” Cordy recalls.

The Sea Bag atmosphere was colored by a couple of old boats that brought in blackfish black sea bass.

“These boats would put 50 to 80 traps on a boat. Each one of them had a piece of line and buoy on it ” Cordy says.

With bait wells filled with menhaden or herring fishermen would run their boats offshore 18 to 30 miles out. The catch was packed at the Sea Bag and stored in an old refrigerated Swift meat truck.

“Theyd take these fish about once a week to Fass Brothers Fish House in Virginia sell them up there and bring the check back to these fishermen ” Cordy says. “The guy that did all this loaded 700 or 800 pounds of fish from three or four different boats put them on the truck and off to Virginia he went. Well the phone rang while Glenn and I were there and this guy had wrecked the truck turned it over on its side the door flung open and these blackfish were scattered all over the highway. And now Jackson had to pay the fishermen for their fish with of course no return. He was furious.”

Jackson said hed sell the place to someone if they were interested.

“Glenn looked at me I looked at Glenn ” Cordy says. “I wasnt married. I had a little bit not much saved up enough to take a chance and I didnt care if I took a chance or not. If I lost it Id start over again. Glenn he was a Piedmont pilot had good credit. So we talked with Jackson said if youre serious about selling wed be interested. To cut to the chase we bought the place from him.”

The first thing the brothers did was close the bar.

“I got up on the roof and there was a big metal sign that had Sea Bag on it. There were some cables that held that sign up and I cut those cables and the sign came crashing down and landed in the parking lot with a rumble ” Cordy recalls.

Two elderly ladies were sitting across the street on a porch.

“They both stood up and clapped because the bar was shut down. The next day they brought a cake over and we grew to be friends ” he says.

The Hieronymus brothers having no real fishing experience except that which they had managed to fetch over the stern of Glenns old Hatteras stepped onto the docks of the Sea Bag and into the wholesale fish packing industry opening Hieronymus Brothers Seafood.

“In the front end of it we had a cash register and wed retail a few fish. Lots of the locals helped ” Cordy says. “The name Hieronymus is Greek. Theres not much Greek left in me its all been diluted over the years but when we came to Wilmington within the first couple of weeks when we established a foothold here and put the sign up and opened Hieronymus Brothers within the first two weeks every influential Greek in Wilmington theres a dozen Greek families those folks came to us whether they were politically connected or business savvy and each one of them shook our hand and said We may not be able to help you but well stick together and try. That was a very warm thing because we didnt know anybody. We remained friends with many of these Greek families for years.”

Because the resident fleet did not include a shrimp boat Cordy traveled to Sneads Ferry to purchase fresh shrimp. He bought 300 pounds that first weekend but sales were poor.

“We just barely did sell them. I thought we were going to have to eat some of them ” he recalls.

Soon the Hieronymus brothers began to diversify each finding his niche.

“Each one of us had a little job. Harvey my twin brother kind of ran things. He was pretty much the manager. Glenn . . . was an asset that we couldnt have done without. When he was flying for Piedmont he would get off a plane whether it was Chicago Philadelphia or New York and run around with a clipboard trying to develop markets for the seafood we caught here. That gave us a shot in the arm market wise. We didnt have to compete with the local area. That was better for us. We ended up buying a tractor trailer and we trucked things to New York and Philadelphia and that was Glenn and Harvey ” Cordy says.

Cordy and George worked the supply end of the business heading out to sea. Cordy captained a progression of three boats. The last of which Hieronymus III was a 75-foot 103-ton trawler that he picked up in Aransas Pass Texas near Corpus Christi.

“I fished down in the Gulf around these rigs the drilling rigs down there then I brought it up here and if I didnt have close to 4 000 pounds a week it was a bad week and that was just shrimp. Along with shrimp Id have 800 900 to 1 000 pounds of flounder spots a seafood platter. There were two or three other trawlers doing the same thing.”

The shrimp harvest was in the summertime from late June through early September and often Cordy says they sold out of shrimp by Sunday at noon.

“Most of the shrimpers would leave at 3 or 4 oclock in the morning and get back at 4 oclock in the afternoon unload their stuff that day re-ice and go back out the next morning ” Cordy says. “I would leave Sunday night and stay out until Friday and come back in. The reason I didnt come in and go out every day was because to get from the fishing grounds to the dock was a seven to eight hour trip if you were off Morehead. So I would stay out there most of the time tow around the clock.”

Shrimp are caught inside a mile from shore with two 75-foot cone-shaped parachute nets stored on deck. Each net cabled to outriggers has wooden doors that when thrown overboard are pitched open and held open by the water current. The doors drag the net along the ocean bottom.

“We would tow for two hours. Every two hours we pulled the nets up dump what was in there separate what the catch was. Shrimping was a vacation to me because it was easier work the weather was much better ” Cordy says.

In September the shrimp nets would come off and the boat would be rigged for fishing trout croakers and flounder. The Hieronymus boys would head north working out of Ocracoke Wanchese and often up into the Chesapeake.

“Thats where the real money was made but you earned it ” Cordy says. “September October November December January up in the north Atlantic it was a different story bad weather ice on the deck. Ive stepped on the deck and slid all the way to the stern.”

“Id call the fish house and at the time we had a tractor trailer and Harvey would dispatch the tractor trailer to Morehead or to Wanchese wherever I was going to unload. We would pay the fish house so much per 100 weight for their ice and throw them on our truck. Glenn had scattered out markets all over the Eastern United States and while I was on the way in Harvey or Glenn would get on the phone and try and get rid of these fish before I got to the dock. So when the truck met me at the dock the truck knew where to go. It was a well-coordinated profitable effort for a long period of time.”

Cordy says “things were booming for a long time. It was a good way to make an honest living. Then the fuel issues started and operating costs started to go up real estate in that area people didnt want to see stinky old trawlers anymore they wanted condos there. We just kind of bowed out of it gracefully ” leaving local stories and memories that will live forever.