Russell “Rusty” Carter is a compact man whose relaxed appearance belies his role as head of the twenty-fourth biggest corporation in North Carolina one that employs 600 people from Central America to Greensboro. The president of Atlantic Corporation Rusty is comfortable in a family of workers. Rustys wife Susan says the Carter family philosophy is “work till a job is done and then some.” “We have an insatiable appetite for doing more than we ought to be doing ” Rusty adds with a laugh. “The Carters are very high energy people.”

Rusty undoubtedly inherited that trait from his father Horace Carter. Its not the only influence that Horace now 88 exerted on his family however. Indeed perhaps the most significant choice made by anyone in the Carter family occurred before Rustys birth. It was a choice that changed a family a community a region and even the nation.

W. Horace Carter was born in Stanley County where his father worked in the local mill. “Im just a country boy that got lucky ” Horace says with characteristic self-deprecation. “My folks never got to go to school. My daddy said he never knew what grade he got to. Whatever grade you could get to in three months.”

At UNC Horace became editor of the college newspaper The Daily Tar Heel and he met a man who would have an abiding influence on his life: Dr. Frank Porter Graham president of UNC. Horace says Graham was “one of the people I patterned my life after. I learned how he felt about black people and I just kind of adopted that.” It was a philosophy that would be tested in ways the young Horace could not have imagined.

After serving in the Navy during World War II Horace responded to an ad placed by the merchants association in Tabor City a rural community in Columbus County just above the South Carolina border. For Horace the jobs primary appeal was the merchants interest in starting a newspaper. Soon after Horace arrived with his young family he published the Tabor City Tribunes first edition. No one suspected what a huge shadow the small weekly paper would soon cast.

In the summer of 1950 the Ku Klux Klan began making its presence felt in an area of North and South Carolina that included Tabor City. When the Klan staged a motorcade through town designed specifically to recruit new members and intimidate the black and Jewish residents Horace Carter considered his options. Several days later he published his first anti-Klan editorial: “No Excuse for KKK.”

It was a fateful decision. Threats of violence to himself his family and his paper soon followed. A family dog was poisoned. “The Grand Dragon came to see me twice ” Horace recalls. “He said If we cant get you any other way well stop every one of your advertisers from advertising with you. Youll be out of business. And I would have been out of business that next week.” While some advertisers did leave the paper managed to survive. 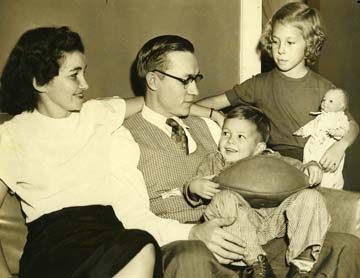 Rusty Horaces second child remembers little of this tense time. “I have some images ” he says. “I recall things like car lights lined up in the yard.” He also retains a sense of the confusion of those days. “Whenever Dad would get any kind of death threat theyd gather up my sister and me and take us to somebody elses house to spend the night.” And though Rusty says he was “too young to remember ” he does recollect those headlights shining through their windows and “fires in the front yard” from the crosses the KKK burned.

Still Horace refused to give ground continuing to attack the Klan in print. Eventually his persistence attracted the attention of larger regional newspapers and ultimately the national press and then J. Edgar Hoover and his F.B.I. Indictments and more than 100 convictions of Klan members resulted. Horaces efforts were recognized in 1953 when he won the Pulitzer Prize for meritorious public service the first ever awarded to a weekly newspaper. It would become one of many awards he would receive.

For Rusty his fathers accomplishments were simply part of his childhood. “I was probably a young adult before I had a very deep sense of the richness of the story and the commitment it took.” But he could not help but be affected by Horaces choices. He knew his family was different. He saw his fathers courage.

In a time of strict segregation when doctors waiting rooms were separated by race and movie theaters offered a balcony for blacks and floor seating for whites the Carters made their own way. “If there was a city council meeting all the black folks would sit on one side and all the white folks would sit on the other side. Well we always sat on the black side ” Rusty recalls. “I wanted them to know we liked those people just like we liked everybody else ” Horace explains. “I always went on the black side just to show thats what we ought to do.”

Such was the nature of the lessons Rusty absorbed from his father. “It was teaching by action and example. I dont know that my dad and I have had ten minutes of conversation about race or equality ” he says. “It was very much an experience of listening and watching and being part of his very public career. When youre in the newspaper business everybody knows what you think particularly if youre the editor because you say what you think every week. So the teaching was not in any formal method it was all about his ongoing voice of reason and equality and fairness. There were two or three principles you learned growing up in this family. Hard work was the first one.”

As for the philosophical stands Horace made Rusty says they “all flowed from one thing: all men are created equal.”

Although work consumed the Carter family it didnt completely define it. An outdoorsman Horace shared his passion with his only son. “Times together were in large part fishing times. We did a lot of fishing and hunting ” Rusty says. Still the familys sense of purpose was never far away. “There are a lot of lessons learned on a small boat ” Rusty smiles.

Though he respected the newspaper which defined Horaces career Rusty didnt inherit his fathers devotion to journalism. “My whole life has been a business career. I like the thrill of the chase. I like the game of business.”

Nevertheless Rusty remains acutely aware of his heritage and proud of his fathers work. “The newspaper seed has been enormously important in our business ventures success because its a cultural thread ” Rusty says. “The foundational principles that he [Horace] established that ultimately won the Pulitzer Prize have had everything to do with who we are as an organization and who we are as people.”

When asked about the familys success Horace is quick to give Rusty credit. “Hes been far more successful than I could have dreamed of being.” Horace pauses and then delivers a fathers ultimate tribute: “I was just fortunate to have a son like this.”

Considering the source it is high praise indeed.