We live in eclectic times where anything goes and everything comes around again at a dizzying rate. The individualization of personal space is back in vogue and no more evident than in the most frequently populated room in the home: the kitchen where innovative designs and unique quality-of-life philosophies are simmering.

Wowed by the way three homeowners nourish themselves and their families whether home alone or in the company of friends we hand-picked their wonderful waterfront kitchens to share with our readers. Each design is the outward visible symbol of personal taste and a perspective on good health the currency of our emerging stay-at-home economy. If your body is your temple then these kitchens are the bedrock of sacred space for sampling the all-new good life. Its elemental.

Earth air fire and water rendered in reclaimed wood raw stone cast iron and recycled glass are the design essentials for gourmet cooking with organic ingredients getting back to basics growing your own food going locavore at the farmers markets or simply eating living food raw food with all its enzymes and nutrients intact.

Everything comes and anything goes. Where better to start dishing up a new recipe for life than the kitchen?

Home on the Range 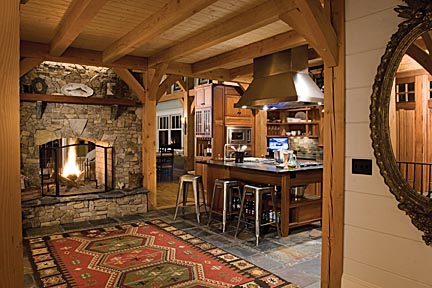 Tim Bournes cowboy kitchen was born out of the quintessential California Arts and Crafts movement (1880 to 1910) that exemplified a lifestyle in harmony with nature. The style rumbled across the landscape and 100 years later the movement is still shaking up the perception of what a kitchen might be if it was crafted organically from its setting.

“The setting dictated the whole house ” he says. “I didnt set out to make the house that way. I didnt wake up one day and say Im going to build a mountain house at the beach.”

He wrestled with local builder Ralph Konrady with whom he has collaborated three times over the design but Bournes signature is on everything in the home including the kitchen down to the fire dogs in the fireplace. “I dont know what Im doing I just know what I like ” he adds.

The moment the front door swings open and the threshold is crossed he is welcomed into the heart of his home. The hearthside kitchen is purposefully inviting.

“Kitchens and food have always been a major portion of my upbringing ” Bourne says. “It was always the meeting place and focal point of any house no matter where it was. Thats where people congregated. I wanted a congregation area around two things that people love that I love in a house and that is the food the cooking of the food and hanging out talking while somebodys cooking or collaborating and cooking. And also by a fire; the fireplace is extremely important in that woodland setting and it was important that that fireplace be double sided for that purpose so that you could hang out by the fire and cook and eat. It was all centered on the front door through the stovetop its centered on the window and your eye just continues to go out through the window.”

Attracted to commercial restaurant kitchens stateside and abroad it is no accident that the floating island is staged for a culinary art experience. With one arms length from the sink and another from the dangling iron pot rack the island is equipped with a stainless steel hood and a Viking gas range customized with a wok burner. It is hot fast yang energy a high performance set-up for the chef allowing enough elbow room for guests to pull up a stool while he rustles up a savory hash garnished with a twist of the pepper mill and a dash of salt from the well.

The effect is manly verging on macho Western fringing on Asian very cowboy Samurai. Even though the surrounding sunlit views are streaming through pine needles and marsh grass the Bradley Creek setting could be anywhere on earth. For Bourne its home on the range. 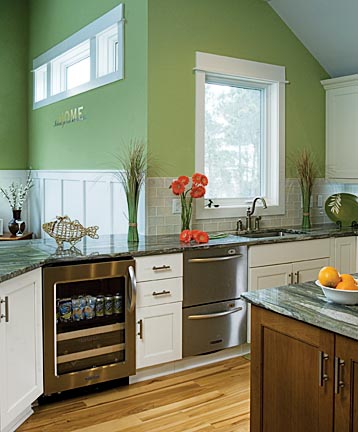 Airy blue ceilings and budding hemlock green walls envelop the lofty second floor kitchen that is the domain of the Starling family Holly Bryan and their two children daughter Mason 6 and son Davis 3 during the early morning breakfast rush the twilight evening meal and all weekend long.

The effect is breathtaking.

Kitchen designer Gordon Massengill greeted Holly Starling who arrived at Kitchen and Bath Galleries showroom on Kerr Avenue clutching her dreams in a folder of magazine clippings. It is the jumping-off point for most clients Massengill says. He embraced her concepts fitting her wishes and desires into the space and thus began their dance gently nudging the Zen envelope until the fundamentals where to ground the island aim the lighting and anchor the appliances were integrated with the elements in perfect union with the homes interior environment which was married to the great outdoors.

Starling opted to have two islands one with a natural walnut base covered in granite the other painted white to match her cabinets covered in natural walnut a subtle juxtaposition of the finish elements that define this generously proportioned space.

“She really wanted a place where her kids could be comfortable. She wanted it kid-friendly but didnt want it to be kid-esque. She wanted an area where they could sit and be in her kitchen space but away from anything hot ” Massengill says. “The secondary island became a place for people to be in the kitchen but not on top of what she was trying to do.”

He wanted something that took the linear edge off of the arrangement of cabinets and countertops. “We needed a lot of those linear spaces for work space ” he says “but we did the little octagonal end as an entertainment area.”

The bump is a buffer between the kitchen and the dining room and a home base for one of the many convenience features an under-the-counter cooler. Originally intended for chilled adult beverages it has been given up in favor of a mini fridge for the kids.

While the hermit crabs Lilo and Stitch quietly play on the counter in their hot pink plastic cage a magic bean stalk grows out of a Dixie cup something Mason brought home from school. The unnamed wild green thing inches toward the ceiling near the window where Starling runs the faucet and gazes out to sea. 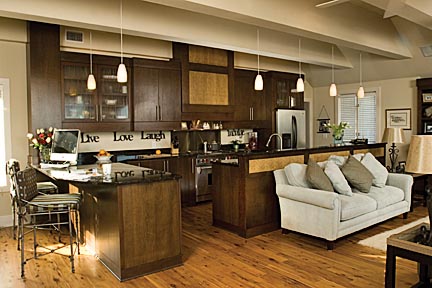 A quaint 1920s beach cottage is hardly the place you might expect to find an upscale loft but that is in fact what you will find inside Lisa Weeks Banks Channel bird cage.

Born out of a love affair with the water the island lifestyle and a passion for preserving a vanishing vernacular architecture Weeks reclaimed the Arts and Crafts exterior of her vintage bungalow while elevating her interior living quarters to a higher octave choosing the high-minded cosmopolitan style that flatters her can-do attitude about life.

With a team of architects Michael Dell and Quinn Sweeney and local builder Wright Holman she gutted the second floor blew out the roof pushed the elevation up to the height limit and braced her upper walls with structural beams to create an unencumbered second story great room perforated by floor-to-ceiling glass windows overlooking the water and old Wrightsville Beach.

But Weeks is the new Wrightsville Beach: smart sassy educated outspoken active and sophisticated. Her space is Manhattan over the Hudson Miami over the Biscayne San Francisco over the Bay very up tempo and more importantly unexpected.

Her kitchen designed in collaboration with architect Dell interior decorator Cathy Maready Kitchen Creations and cabinet maker Larry Anderson balances the airy floorplan with a bank of cherry cupboards with curly maple veneers and reedy resin inlays. A generously proportioned island functions as a defining architectural feature that delineates the food preparation area from the living room salon and the formal dining niche.

From her island she can banter with her guests as they lounge in the open living area and from her dining room where the cherry wood cabinets and Australian cedar floors are reprised she has a birds-eye view of the waterway between the bridges and all the action of boats board paddlers jet skiers and tubers kicking up a wake.

The south beach view is masked by an open staircase with wire rope balustrade screened with opaque Kalwall windows diffusing the daylight protecting her privacy while subliminally illuminating and enlightening the lofty perch. Anyone who has had the privilege of her gracious hospitality is intimately acquainted with true Lisa live love laugh!