Home of Distinction: Romancing the Cottage

The earth is round but the world is full of seductive edges and remote corners where man wrestles the odds of nature to carve a niche for himself on distant seaside islands steeped in privacy where his true visionary genius may come to repose.

Chadsworth a cottage on the extreme north end of Figure Eight Island on a site which the owner says was at one time heavily treed with live oaks ravaged by hurricanes is one of those rare private villas where a world traveler retreats behind the facade of an anglicized Palladian mansion embedded into the fragile barrier island landscape. The landmark dwelling is at once a prominent navigational aid for mariners traveling the Atlantic and a soft landing for homeowner Jeffrey Davis. 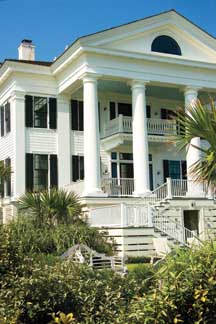 Chiseled from classic architectural styles passed down through the ages Chadsworth’s exterior represents Davis’ lifelong fascination with Greek and Roman forms from which he has fashioned a thriving enterprise as a designer and manufacturer of classic columns — a profession and a passion that sends him around the world.

He returns to eastern North Carolina where he has longstanding family ties and fond memories to unpack his bags in a home framed by formal highbrow lines charmed by vernacular coastal Carolina traditions.

The centerpiece of his home is a collection of antiques handpicked during continental and global forages.

“The furniture that I’ve been collecting for over 20 years is all from the early 1800s whether it be Biedermeier or First Empire New York or Regency … I collect these things ” Davis says. “I wanted that period and that type of furniture and I think that was a starting point.”

The challenge was how to create a context for the furniture in a beach cottage setting.

“I like to live with my antiques. There’s nothing in here that you can’t sit on you can’t touch you can’t do something with. My dogs jump on every single thing in the house kids do too ” Davis says.

When it was time to design his permanent home Davis recruited a trusted colleague Christine G. H. Franck who like Davis himself sits on the board of the Institute of Classical Architecture & Classical America. With a combined 25 years of tenure the pair teams up with other design professionals working tirelessly teaching and traveling to spread the mission of the institute which is dedicated to advancing the practice and appreciation of the classical tradition in architecture and the allied arts. Franck for her design work on Chadsworth Cottage also received a coveted 2007 Palladio Award named in honor of Renaissance architect Andrea Palladio for her outstanding work in traditional design.

“One of the things that we were faced with early on was the parameters of building here ” says Franck. “The fact that we had to elevate the first floor as high as we did to 13.5 feet finish flood elevation … given that we then looked at all the different options.”

Those options were Palladian villas English villas and American Federal houses that Franck says are based on Roman precedents elevated on a high base.

“We made that decision fairly early on so that the overall design direction for the house was going to be in this Anglo-Palladian tradition ” Franck says.

“Jeff was also very clear about wanting the house to have a sense of character and place to eastern North Carolina. He didn’t want it to look like it should be anywhere other than here ” she adds.

Franck’s brilliant design blends formal and informal interiors that reiterate Davis’ love of symmetry and balances his gregarious lifestyle with a need for solitude — entertaining as many as 300 guests on the lawn hosting intimate family gatherings at holiday time or private dinner parties in the grand hall and the dining room or retreating to his singularly quiet balcony where he looks over the Rich’s Inlet sand spit an idyllic windswept vista — savannah white sand and feisty surf.

Very public spaces like outdoor showers and very private places are stacked within the footprint of the three-story three-bedroom three-bath home from the ground level to the attic dormer windows that crown the hipped roof.

Supported by load-bearing columns representing the lowest to the highest orders of classical architecture incorporated into the fabric of the house both the interior and exterior column forms rise with each successive function.

“The classical orders have a hierarchy to them ” Franck explains.

“The Tuscan order on the porch columns is a strong order and it gives this house the sense that it’s projecting strength out over the water. The (interior) Ionic capitals downstairs are from the Erechtheum which is a small building on the Acropolis. The Corinthian order is the highest of the orders if you will ” she says admitting that there are at least three schools of thought that define classic columns and their origins spurring much debate historically. Undisputedly the Corinthian columns in Davis’ master suite were inspired by the Tower of the Winds from Athens Greece.

“Sometimes I think it’s important to create a fiction if you will for a house ” Franck says. The fictionalized story she weaves of someone who lived along the Carolina coast who might have been involved in the trade industry who brought back some tiles from Holland picked up a cane chaise in India a First Empire day bed from one of Napoleon’s castles an 1832 Biedermeier dining table from Austria and a writing desk from Germany and brought them home to his island retreat is not far-flung from the truth.

To lighten the intensity of the antiquities and the treasures Davis and Franck collaborated on a window treatment used throughout the house combining wooden plantation blinds with sheer diaphanous drapes.

“Part of what we were going for ” Franck says “was this kind of Caribbean … almost trade-oriented house … where you get the blinds you get the breeze coming through the windows you get the slats of light … a lot of this is to downplay the formality of the furniture and to make it a comfortable light air-flowing house and place to be in.”

Embellishing that fiction is the Chadsworth name. Davis says “I wanted a name that sounded old as if we’d been in business for hundreds of years.”

From the north end of Figure Eight Island the visionary genius gazes out to sea.

“I love this porch out here. The columns and the view it’s absolutely gorgeous ” he says. Chadsworth his cottage appears as if it had always been there his homeplace for hundreds of years.