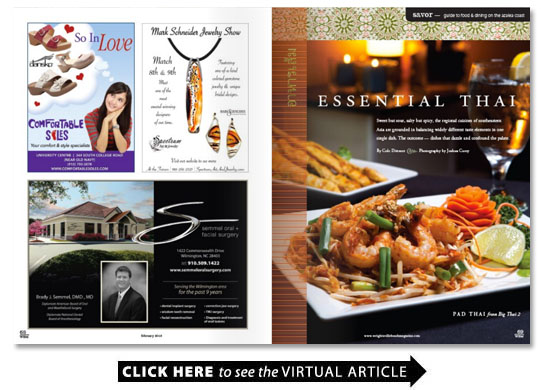 Sweet but sour salty but spicy the regional cuisines of southeastern Asia are grounded in balancing widely different taste elements in one single dish. The outcome dishes that dazzle and confound the palate.

At the center of many traditional Asian recipes are carefully prepared rice or egg noodles that provide a substantive base for the wide range of tastes. Whether coated in sauce or soaked in broth noodles are not to be overlooked among the complexities of southeastern Asian cuisine.

When trying new foods from different regions there is always a gateway dish. Like spaghetti in Italian cuisine or crepes in French or teriyaki chicken in Chinese a steaming plate of Pad Thai also known as Phat Thai which is made from rice noodles   is typically the safe foray into Thai cuisine. Vietnamese traders originally introduced the dish to the Thai people. The dish was made popular during the late 1930s and 40s when the use of rice noodles was promoted by the government to increase rice exportation.

Charin Choti also known as Big of Big Thai 2 says the perfect Pad Thai always begins with the correct preparation of rice noodles. This requires soaking noodles in hot water for 30 minutes and vigorously stir frying them in a saut pan on high heat for about two minutes. As with all Thai rice noodle dishes it is important for the noodles to be firm enough to have a little chew and hold the ingredients together.

Pad Thai sauce the other base of the dish is a delicate balance of ingredients Big says. He mixes tamarind paste white vinegar soy sauce paprika sugar and salt the exact measurements of which he prefers to keep to himself.

Unlike many Western dishes Thai cuisine utilizes small amounts of meat. Big says tofu and small dried shrimp are the traditional combination in Thailand. In his restaurant shrimp are Bigs favorite protein because they cook in the same amount of time it takes to stir-fry the noodles.

For Big Pad Thai is a way to introduce Thai food and many other Thai favorites like the drunken noodle or Pad Kee Mao. While the principle of balancing opposite tastes remains drunken noodles are wider and naturally spicier than Pad Thai noodles.

If there is one dish that is the most common in Thailand like the Thai equivalent of a BLT or cheeseburger says Larry OConnor of Thai Spice it would be Pad Kee Pao the rice version of the drunken noodle.

OConnor who took over the Thai Spice location with his mother Goy two years ago keeping the name says the main aromatic ingredient for his drunken noodle is the Asian basil which has a distinctly different taste and smell than any other type of basil. In addition to a heavy dose of Asian basil tomatoes onions and red and green peppers are the other vegetables typically found in drunken noodles. OConnor says almost any home in Thailand has a small vegetable garden from which to gather those vital ingredients.

Offering a completely different flavor profile from Pad Thai sauce the Thai Spice drunken noodle sauce is a combinaton of soy sauce vinegar oyster sauce sugar salt and pepper and a hint of sweet soy sauce. Although there is a little sweetness in the sauce OConnor says the drunken noodle is meant to be spicy.

Some say the inebriated can still taste it OConnor says. This may be one of the few dishes youre able to enjoy when your senses are numb.

From northeastern Thailand OConnor says the fifth basic taste umami or savory is prevalent in many Thai dishes. OConnor says it is also derived from the variety of regional cuisines Thailand is influenced by like Chinese Indian Laotian Malaysian and Vietnamese.

For Solange Thompson that mixing of Asian influence is the principal ideal behind Indochine the restaurant she and her husband opened 11 years ago. One of the vegetarian options on the menu the Buddhas Feast In a Nest combines elements of Vietnamese and Thai cuisine from one of her mothers recipes.

This dish comes from my mother (Pan Thi Em). She gave up meat and every lunar month she cooked this Thompson says. So I thought if I added a noodle bird nest to my mothers recipe it would be a good dish.

A native of Vietnam Thompson says this dish can be found in Vietnam and Thailand with substitutions of the vegetables based on the varieties found in each country.

We just use all different textures of vegetables. It adds a lot of complexity Thompson says.

The variety of vegetables and the lightness of the dish make a popular choice for her more health-conscious diners. Thompson says it can be made gluten free by substituting rice noodles instead of egg noodles.

Thompson describes the Buddhas Feast as an enlightening experience.

Barely a year old chef Keith Rhodes Phun Seafood Bar a southeastern Asian tapas bar is home to many multicultural Asian dishes that mix flavors from across the region. The Hong Kong-style noodle bowl is an example of that. Loaded with crispy pork belly ginger cilantro fried pork wontons and crispy yu choy vegetables Rhodes says the dishs pho broth and combination of vermicelli rice and egg noodles is the true foundation.

You are going to get something that is a little sweet a little fragrant with fresh cilantro which is key to giving it depth and flavor Rhodes says. The pork broth is a very deep flavor as well and [is] simmered with star anise so it layers the flavor.

For the rice and egg noodles utilized in the Hong Kong noodle bowl Rhodes prefers the noodles to be a little chewy to hold up in the broth. The name Hong Kong noodle bowl comes from combining the two noodle types which is the typical way its found in Chinese noodle houses. In his travels across Asia Rhodes says this style of noodle bowl was a favorite for him and his wife Angela.

Although the noodle combination may be of Chinese origin the dish is rooted in the Vietnamese tradition of pho broth. Rhodes says garlic chili and hoisin sauces are a must for those looking to add spice to any dish with a pho broth base.

One thing a good broth like that will have is a little bit of fat in the broth he says. If you can rub your lips together and feel a little grease you know youve got a good bowl; if you dont and its more like water then it is no way as good or fulfilling.