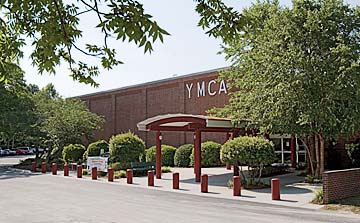 Why the Y? Dick Jones CEO of Wilmington’s single-branch YMCA has been involved with different YMCA programs since first grade and explains it as well as anyone: “There is no other organization like a YMCA — people can come to be with friends socialize together spend quality time as a family and improve their health. It’s an opportunity for folks from different walks of life and with different abilities to spend time together and develop each other’s character and spirit.” Clearly the Wilmington Family YMCA is no typical gym. With records dating back to 1887 our local Y has a long and rich history within the community.

The first ever YMCA had 12 members and was founded by George Williams (1821-1905) on June 6 1844 in London England in response to unhealthy social conditions arising in big cities at the end of the Industrial Revolution. Williams and some of his fellow drapers (clothing goods tradesmen) organized the first Y to replace Bible study and prayer for an unseemly life on the streets. By 1851 the first YMCA in the United States was founded in Boston. The Y trend soon caught on in other large cities like New York and Detroit. In 1853 the first YMCA for African Americans was founded in Washington D.C. by Anthony Bowen a freed slave. The next year the first international YMCA convention was held in Paris. At the time there were 397 separate Ys in seven nations with 30 369 total members.

Sir George Williams was knighted by Queen Victoria in 1894 for founding an organization that now 164 years later serves 45 million youth and families around the world with more than 20 million members in the United States.

The Wilmington YMCA currently has approximately 6 000 members who participate in everything from summer camps and after school programs to fitness classes swim lessons and sports leagues. When the association first began members met in private homes or rented rooms in the local bank or library for Bible study lessons. By 1891 the group bought a building on the northwest corner of Front and Grace Streets equipped with an auditorium swimming pool and rooms for visitors. According to a 1901 article in the Wilmington Dispatch a marble slab was placed in the sidewalk in front of the entrance to the building that read “Y.M.C.A. Welcome Strangers.”

That hospitable mission continues today. “If you look back over the history of this association as well as YMCAs across the country we have evolved to embrace our entire community ” Jones says. “When the YMCA began it was only for white males. It has evolved to where now every person is welcome in this YMCA and every YMCA. Regardless of what you believe spiritually where you come from the language you use the color of your skin your age gender — every single person is welcome at this YMCA. Wilmington is a very diverse community and so is the YMCA.”

Not only is every person welcome last year alone the YMCA raised more than $130 000 to use for scholarships for children and families in Wilmington who would not have otherwise been able to afford Y services. “If you are not able to do something on your own we’ll help you and teach you. There’s just a different approach a different philosophy here ” Jones says. The president of the board of directors Wendy Wrigglesworth adds “The Y focus is completely on giving back and that motto is nothing new. The Y is rooted in a lot of tradition.”

The YMCA has always had a powerful and progressive approach to influencing local communities. An 1891 article titled “Laying the Corner-Stone” in a publication whose marking has been lost over time states that urban YMCA programs like ours in Wilmington were founded with the purpose of going “to every shade and phase of life in every haunt of crime in the back alleys of our cities in every place where there is a brother (fallen though he may be) to be seen and a human soul to be saved.” The YMCA is certainly not an organization to shy away from novel ideas or to wait for change to occur on its own.

Throughout its history the Wilmington Y has continually reinvented itself with innovative programming. The organization began offering affordable night school classes as early as 1893 in basic subjects like arithmetic history writing and spelling. By 1911 the course load had expanded to include singing penmanship shorthand bookkeeping English grammar business correspondence typing Latin and Greek. In its early years the Y held meetings for diverse interests including a camera club stenographers’ association literary society glee club model airplane club archery and rifle groups and many others. Its library was formed in 1889 when a group of men gathered together and donated more than 200 of their favorite books by writers like Dickens and Milton.

In 1922 the Wilmington Y added a program that has changed and grown but still continues today: a youth summer camp. It started with Camp Penton at Lake Waccamaw where young boys participated in athletics aquatics nature studies and outdoor learning — a curriculum that a 1927 Wilmington Morning Star story described as “a great many things pertaining to the outdoors that are lost to the boy living in the city.” That tradition lives on in Wilmington with dozens of camps to choose from everything from horseback riding to culinary camp.

While the Wilmington Y has no plans for altering its mission significant changes are in the works. “One of the big goals we have for the YMCA ” says Wrigglesworth “is to build a first-rate facility in Wilmington. We either want to build on our current location or choose a central location in Wilmington for a new building.” The Y raises money through its We Build People campaign which hosts two local races annually and thrives on donations. “When you race in the Tri-span this summer ” says Jones “you are helping a child go to summer camp. When you participate in the triathlon in September the fees that you pay help families to be involved with the YMCA.”

No matter how much the Wilmington Y has changed over the past century — moving three times to get to its current location on Market Street — Jones is convinced that its mission to focus on “spirit mind and body” in order to “serve and treat and heal and improve the entire body the entire person the entire being” is still the same. One program in particular that Jones says he can point to as an inspiration to community members is the Physability and Inclusion program which offers fitness classes for people of all abilities.

Chris Hawkins a YMCA member and a participant in the Physability and Inclusion program suffered a spinal cord injury several years ago. “My Medicaid ended and I needed some kind of way to work on my physical therapy. The Y opened its doors right up to do my rehab. I have wonderful trainers who help me with my coordination and my strength; even just little things. I couldn’t tie my shoes make my bed fold clothes or cook. But I’m gaining my strength. I can function as an everyday person an able-bodied person. The Wilmington Y’s not just a gym but a family situation where people care about people and are ready to help each other. Where else are you going to find that?”

Visit www.wilmingtonfamilyymca.org or call (910) 251-9622 to donate volunteer or join the YMCA.

Wilmington: Lost But Not Forgotten by Beverly Tetterton. The Bill Reaves Collection at the New Hanover County Public Library

The national YMCA is credited with inventing several popular sports like basketball and volleyball as well as influencing and fostering programs like the Boy Scouts Campfire Girls Toastmasters International (a nonprofit organization that teaches communication and leadership skills) Gideons International Peace Corps and United Service Organizations (USO). Here’s a look at a few of the YMCA’s firsts:

What programs and opportunities are waiting for you at the Wilmington YMCA? Members of all ages enjoy diverse benefits and Dick Jones CEO of our local Y is convinced that everyone can find their niche. At 6 months babies can start participating in swim lessons. Young children can join T-ball and soccer leagues or participate in family events like Mother/Daughter Teas and Father/Daughter Date Nights. Both children and teens can take part in summer camps galore — the Y offers camps for backpacking canoeing and kayaking water safety service learning sportsmen science music and arts among many other choices.

Local teens have unique opportunities like competing in a Model United Nations conference working with community mentors for Teen Achievers and serving as mock government officials for Youth and Government. Everyone can participate in free wellness programs fitness classes and the Physability and Inclusion Program which offers classes like seated gentle yoga healthy back and bone yoga (for those with back pain or osteoporosis) tennis gentle Tai-Chi and origami. There are also special programs for senior citizens like Senior Perk where participants can eat brunch play cards and enjoy friendly company.