Wrightsville Wreck of the USS Columbia 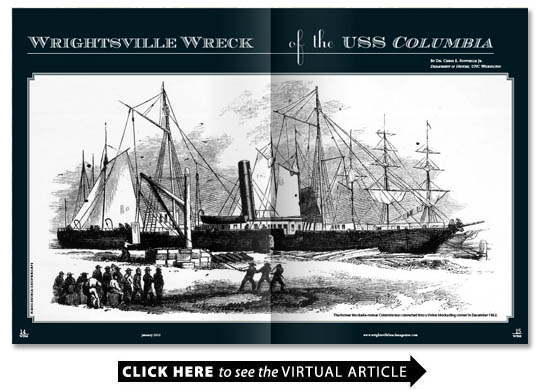 President Abraham Lincoln proclaimed a naval blockade of the seceded southern states on April 19 1861 only five days after the fall of Fort Sumter at Charleston South Carolina to Confederate forces. He revised the blockade on April 27 to include Virginia and North Carolina although the Tar Heel state was still in the Union and did not go out until May 20 1861. Lincoln realized that the South did not possess the industrial capacity to manufacture large quantities of war materials to sustain a war effort and would turn to Europe for help. He intended for foreign nations especially Great Britain which depended heavily on the importation of southern grown cotton to fuel its cloth industry to stay out of the ensuing American conflict. Queen Victoria of England and other heads of state agreed to respect the blockade but they turned a blind eye to the profitable smuggling trade that soon began in association with Confederate merchants and importers.

The US Navy faced many challenges in the spring of 1861 to establish the blockade. Only 12 steamships out of 42 commissioned vessels were available for immediate service to guard 3 549 miles of coastline from Virginia to Texas. As a testament to Yankee ingenuity that motley array of vessels had grown to 671 ships by wars end. Two out of every three Union vessels saw duty on the blockade. Despite its exponential growth the navy failed to prevent many commerce vessels from carrying supplies into Confederate seaports. The North Atlantic Blockading Squadron found it all but impossible to halt the trade at Wilmington as blockade-runners could access the Cape Fear River by two entry points Old Inlet at the mouth of the waterway and New Inlet to the north. The success rate for blockade-runners operating at Wilmington was 80 percent leading the port to become known as the lifeline of the Confederacy.

Boats cruising through Masonboro Inlet pass over a piece of Wrightsville Beach history. Buried underneath 15 feet of sand near the inlets mouth are the remains of the USS Columbia a gunboat that ran aground accidentally while on blockade duty in mid-January 1863. She is one of more than 80 Civil War shipwrecks along the Cape Fear coast the highest concentration of such derelicts in the country including four off of Wrightsville Beach. Most of the ships were blockade-runners chased ashore by Union blockaders while attempting to smuggle supplies into the Confederacy by way of Wilmington. Only a few Union vessels were lost off of the southeastern North Carolina coast and the wreck of the Columbia is largely unknown today.

The Columbia began her career as a Confederate blockade-runner. Built by Archibald Denny in Dumbarton Scotland in July 1862 she was a 503-ton iron-hulled screw steamer that measured 168 feet long and 25 feet wide with a 14-foot draft. The USS Santiago de Cuba captured the Columbia on her maiden voyage as she attempted to run the blockade of Florida on August 3 1862. The US government purchased the Columbia from a prize court at Key West the following November and assigned her to the North Atlantic Blockading Squadron. Fitted out as a cruiser at Hampton Roads Virginia in the autumn of 1862 her armament comprised six 24-pounder smoothbore cannons and one 30-pounder rifled cannon. The crew totaled 100 officers and sailors commanded by Lieutenant James P. Couthouy.

The Columbia headed southward in late December 1862 to take up station with the Unions blockading force off of Wilmington North Carolina. The squadron desperately needed her services as the blockade of the Tar Heel seaport had been largely ineffective.

The Columbias duty was to cruise along the coast and intercept blockade-runners attempting to enter New Inlet. Shortly after dark on January 14 1863 Lieutenant Couthouy ordered his ship to anchor for the night near Wrightsville Beach. Unfortunately the leadsman miscalculated the waters depth until the blockader was almost in the breakers. Alerted to the danger Couthouy sounded the bell for the engines to be reversed but it was too late.

The Columbia ran hard and fast aground in about eight feet of water at Masonboro Inlet. Despite the crews best efforts to free the iron-hulled ship waves pushed her broadside to the shoreline and filled her boilers with seawater. Anxious sailors fired flares into the night sky hoping another Union blockader would spot the Columbia and come to her rescue. When that failed Couthouy sent a lifeboat to inform the Union blockading fleet at New Inlet some 20 miles to the south. The boat made little headway in rough seas and it was late the following afternoon before it reached the USS Cambridge the nearest vessel which immediately got underway.

By the time the Cambridge reached the Columbia the USS Penobscot had already arrived and begun rescue operations. She managed to get crewmen off the wreck but a gale on January 15 hampered efforts. The following morning Confederate troops showed up to lay claim to the Union ship. Sentinels patrolling the beach had probably spotted the Columbia sometime during the day on January 15 and alerted military authorities in Wilmington. Gray-clad artillerists and infantrymen soon took up positions behind sand dunes on Masonboro Island. Both the Cambridge and Penobscot fired their cannons at them only to be answered by Confederate artillery fire.

Rufus E. Lester claimed that his regiment the 25th Georgia Infantry participated in the battle. The Wilmington Daily Journal reported on January 17 1863 that Colonel William Lamb took a Whitworth rifled cannon and a detachment of cavalry and infantry from Fort Fisher near New Inlet to assist in the capture of the Columbia.

The Columbia sustained considerable damage from the crossfire throughout the morning of January 16. The shooting and heavy seas halted rescue operations by the Penobscot and Cambridge. Realizing that the game was up Lieutenant Couthouy threw most of his cannons overboard to keep them from falling into  Confederate hands and then hoisted a white flag of surrender. Lifeboats began ferrying the officers and crewmen still aboard the stranded ship to shore around noon. All told 12 officers including Lieutenant Couthouy and 28 sailors were made prisoners of war. After a brief stay in Wilmington the officers were transported to a military prison in Salisbury North Carolina while the sailors were sent to Richmond Virginia.

During the afternoon of January 16 and much of the following day Confederate soldiers went on board the Columbia to salvage weapons equipment and souvenirs. The Cambridge and Penobscot harassed them with cannon fire. With a Confederate flag defiantly flying from the masthead the southerners stripped the ship of usable items and then burned what could be burned.

The Wilmington Dispatch reported in May 1909 that the hulk of the Columbia was still visible in the ocean a few hundred yards from the Lumina. In the late 1970s underwater archaeologists detected a large iron anomaly deep in the sand near Masonboro Inlets jetty which they subsequently identified as the remains of the Columbia.

Three additional wrecks believed to be the blockade-runners Dee Fanny and Jenny and Emily (I) were discovered between the inlet and Crystal Pier. A recent dredging project in Masonboro Inlet by the US Army Corps of Engineers disturbed the Columbias grave. Adding to the evidence that the wreck is indeed the former Union gunboat three wooden sabots that cushioned 24-pounder cannonballs washed ashore on Masonboro Island just south of the inlet in 2010. Discovered by a Southport resident the artifacts were turned over to the North Carolina Division of Archives and History Underwater Archaeology Branch at Fort Fisher in Kure Beach for conservation. The Columbias armament included six 24-pounder cannons.

The wreck of the USS Columbia is a reminder of the important and fascinating role that Wrightsville Beach Wilmington and the Lower Cape Fear played during the Civil War.

The story does not end there.

Haywood Newkirk IV a resident of Wrightsville Sound says family legend has it that his great great grandfather Captain Abram F. Newkirk of Co. A 3rd North Carolina Cavalry learned that one of the captives from the Columbia was a former classmate of his at the University Medical College in New York. Newkirks company known as the Rebel Rangers was stationed at Camp Heath in Scotts Hill in January 1863. Although it is unclear if his cavalry unit helped capture the gunboat Captain Newkirk allegedly took his old friend   who was reportedly wounded or injured in battle to  his plantation home in the area of what is today Landfall. Sure enough a US Navy doctor Acting Assistant Surgeon Passmore Treadwell was taken prisoner on Masonboro Island on January 16 1863.

If the Newkirks family story is not true it should be. According to an official account by Lieutenant Couthouy Treadwell was imprisoned with the Columbias other officers at Salisbury Prison until exchanged at the end of January 1863.