From the inside out, amber light tumbles from the Peebles’ home on Wrightsville Sound 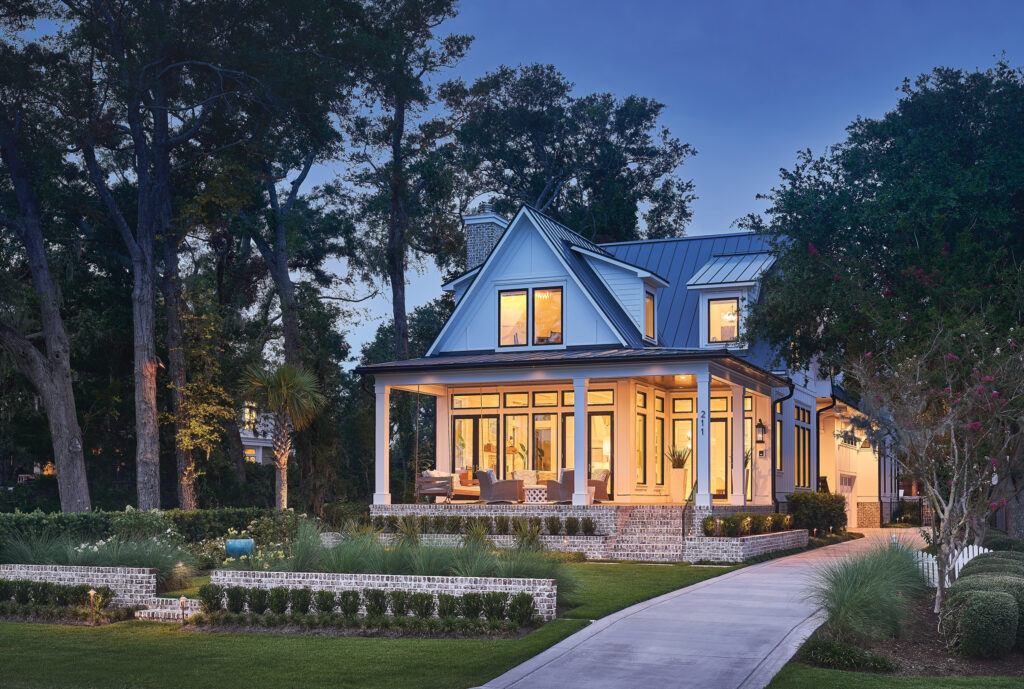 David Lisle laid down the outdoor spaces and designed the pool house and fencing that surround them. Caribbean Pools & Spas constructed the water feature. Blair Walton of Element Outdoor Living leaped from his vehicle, tablet in hand, Harrison Peebles says. Walton’s enthusiasm was a perfect match for Peebles and his wife, Crystal. Photography by Michael Blevins/MB Productions NC

On calm nights, the ambient thrum of the surf drifts beyond Wrightsville strand, reaching the tree-lined mainland at Summer Rest — that timeless waterfront enclave on the banks of the Intracoastal Waterway. The muffled cadence of rolling waves sounds like a late-night lullaby or an early morning mantra. It’s here the Peebles family has dropped anchor to occupy its forever home.

This modernist architect’s approach flows seamlessly from the outside in, connecting living spaces to the surrounding landscape and the waterway beyond. Lisle even engineered a concrete drainage system beneath the house to move excess rainfall from the back of the site seaward.

Challenged with a building site that was only 50-feet wide and 200-feet long, the Victorian lines, Lisle explains, allow more verticality. In this design, mixing those traditional bones with modern aesthetics cries out for more glass, inviting natural light. Intersecting gables create a pitch on par with the surrounding treetops.

Details like dormered windows are mindful of the bygone era, but also bring light into the upper story. A sloping roof hovers above an engaged porch. Distressed brick floors are reprised indoors around the hearth.

“Great house — great clients — that makes a huge difference,” David Lisle says of Harrison and Crystal Peebles. “They come to you with the idea that they are open to creativity, and you get to create things with them.”

The couple eyed the property when it came on the market.

“Summer Rest is one of our favorite roads in New Hanover County,” Harrison says.

A Realtor by profession, he waited for the price to drop. Meanwhile, Crystal envisioned family living in a casual coastal farm style home.

“It turned out with modern touches,” she says. “David Lisle did a great job designing it.”

The entry foyer opens into the family’s living room where two columns support 11-foot coffered ceilings and floor-to-ceiling windows are paired with clerestory transoms framing lush views of nearby Harbor Island. The juxtaposition of a traditional ceiling treatment with clean, simple lines, is “an elegant approach that allows the sharing of space a little better,” Lisle says.

Daylight streams into the airy space that also opens to a large kitchen anchored by an oversized meal prep and casual dining island that serves the family of five.

Lisle dropped the ceiling above the adjacent formal dining room to create a more intimate setting. The variation in ceiling height, he says, helps create different rooms without adding walls in the spacious yet cozy 4,400 square-foot, five-bedroom, multi-bath residence.

By the time Bridgett Mazer of Bridgett Mazer Interiors was hired, becoming an integral member of the design and build team, the house was framed and Crystal Peebles had already chosen a few finishes from builder Pat Talbert’s resources.

“She had me relook at those, and we retweaked some,” Mazer says.

Her team supplied a palette of options from which Crystal selected her final choices.

“I can remember talking about the color scheme,” Mazer says. “To me that’s the big thing: What color scheme do you visualize in your house? We didn’t want to have a lot of color, yet Crystal didn’t want it to be all white. We needed to let those areas flow and allow the tranquil denominator to become the focal point.”

Crystal says, “We want it to be very calming.”

So Mazer built a monochromatic colorway in shades of blues — from icy white blues to medium light blues — choosing tones to balance the naturally occurring changes inherent in the waterfront.

Once the palette was set, Mazer “dove right into the lighting.” The lighting fixtures are some of the most beautiful Mazer says she has seen. The custom chandelier was fabricated by a company in Charleston. “We picked every little detail and strand,” Mazer says.

With the lighting plan in the works, the interior team turned its attention to furnishings and draperies.

“What I love about Crystal — what is so unique about them both — they let us be totally creative,” Mazer says. “Crystal said, ‘I want y’all to be in charge. I want you to decide the colorways.’ They were just very refreshing.”

The team looked forward to every meeting.

“Harrison is so laid back and Crystal knew what she wanted,” Mazer says. “Their little girl Selby even came to some of our meetings. We would present three, maybe five choices. Crystal just seemed to love the process and she enjoyed having the final input.”

From start to finish, Mazer set a record for purchase orders for the Peebles’ project. While some designers have their favorite go-to vendors, Mazer and her team blew the lid off the box. Mazer personally squired Harrison and Crystal around the High Point Furniture Market.

It was a fabulous opportunity for the Peebles to see, touch and feel furniture and actually sit on it. Ultimately appointing 12 brands from as many as 40 vendors, the Peebles allowed Mazer to select everything — cabinet hardware, rugs, wallpapers, even the bed linens and towels.

Circumnavigating the floorplan around the carport and garages, Lisle designed a long, 40-foot corridor connecting ground floor living with outdoor amenities. Element Outdoor Living planted mature palms, introducing more layers of textures seen through an array of windows. “I wanted to get a lot of light in there,” Lisle says, “so it doesn’t look like a tunnel.”

“When you come upstairs, the goal is, with a house this long, to have interaction with the outdoors,” Lisle says.

Like old-timey North Carolina seacoast homes from Nags Head to Beaufort, dormered windows usher sunlight into what was frequently furnished like one open bunk room. Adding dormered niches on the second floor achieved the same effect.

The steeply pitched roof above creates A-framed ceilings below where the Peebles kids share a media room, hangout lounge, and a homework station. On this second floor, each one claimed a bedroom.

“The kids were at a good age to basically want everything new,” Mazer says.

Selby, age 10 and enrolled in 4th grade, chose a pink and purple palette for her room. Her older brother, Grant, age 15 and a high school freshman, anchors his space with navy blue. Davon, 18, and soon to graduate high school, chose lighter tones reminiscent of sand and sea.

A separate stair leads to Harrison Peebles’ home office above the garage.

Harrison and Crystal Peebles acquired the property in 2018. Lisle developed the plans within six months, yet it took at least a year and a half to clear the lot and build the house.

Mazer, who is still working to tweak some details, began the interior design process in early 2019. The installation of furnishings, draperies, artwork and accessories was surprisingly seamless despite the COVID-19 lockdown announced a week earlier.

“My grandfather used to tell me to put your wife’s needs before yours and you will be a happy man. I’m still working on that,” he laughs. “That statement has resonated with me since then and I apply the same motto to my business relationships. You get out of life what you put in it and as long as you put the other person first, everyone’s happy. We wake up every day feeling very humbled. We can’t believe this is ours.”

The family couldn’t be happier.

“This neighborhood is so open and welcoming. All generations get together and enjoy each other’s fellowship,” Harrison Peebles says, saluting his neighbors as they stroll or cycle by.