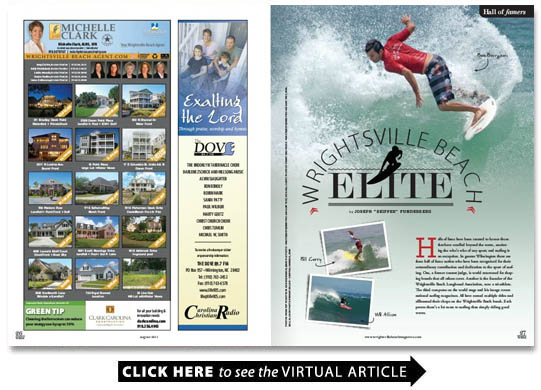 Halls of fame have been created to honor those that have excelled beyond the norm anointing the whos who of any sport; and surfing is no exception. In greater Wilmington there are three hall of fame surfers who have been recognized for their extraordinary contribution and dedication to the sport of surfing. One a former contest judge is world renowned for shaping boards that all others covet. Another is the founder of the Wrightsville Beach Longboard Association now a tri-athlete. The third competes on the world stage and his image covers national surfing magazines. All have earned multiple titles and all learned their chops on the Wrightsville Beach break. Each proves theres a lot more to surfing than simply riding good waves.

The East Coast Surfing Hall of Fame was formed in 1996 by pioneering surfboard builder and big wave rider Greg Noll and a group of East Coast surfers. Every two years the ECSHOF meets at the Surf Expo in Orlando Florida and honors those who have made significant achievements in surfing. The ECSHOF Museum is located in Cocoa Beach Florida. The museum is dedicated to the preservation of East Coast surfing history and displays historically valuable artifacts.

An original Wrightsville Beach surfing pioneer Will Allison is a world-renowned surfer and surfboard shaper founding Allison Surfboards in 1977. Allison co-founded the Wrightsville Originals in 1996 and is a native of and still resides on Middle Sound.

Allison waxes poetic when it comes to his hall of fame induction. “I was surprised ” Allison says. “It was an enormous achievement to be honored by my peers. It was a progression of fortunate events that helped me to be included in the hall of fame. After I was inducted I donated one of my personal surfboards to the East Coast Surfing Hall of Fame Museum. I made the surfboard from scratch including shaping sanding air brushing and glassing. I won an American East Coast title and a United States title on that surfboard thats why I donated it to the museum.”

The board is exhibited at the museum in Cocoa Beach Florida today.

Allison dedicated 13 years to judging professional surfing competitions a serious business of rules divisions heats timing boundaries wave count advancement interference and scoring. By 1982 the Association of Surfing Professionals recruited Allison as a professional judge. He helped determine the outcome of numerous major events as the professional surfing circuit elevated to national attention. When grace was under fire others depended on Allison to express the correct judgment.

“The competition that I was involved in when I was younger was great because we had a lot of great times and forged lifetime friendships all over the world. Those friendships are the most priceless things that ever happened to me ” Allison says. “Today I devote my time to my family and the mastery of my craft.”

Allison has sustained success with a 35-year journey as an entrepreneur and expert craftsman. He continues to shape his coveted line of surfboards considered functional art and is often credited for creating a cottage industry in Wrightsville Beach. A southern gentleman to the core this watermans passions run deep. To Allison surfing isnt just the major league its the only league.

He says “Surfing keeps me healthy its fun and it makes me happy. I love getting in the water.”

A passionate surfer dedicated to the mastery of his craft Bill Curry founded the Wrightsville Beach Longboard Association in 1999. He is the bicycle service manager at Two Wheeler Dealer and finds time to take a dip in the briny almost every day.

“Its really cool being recognized for something you did in your life ” Curry says. “I can tell you today its a very special thing. I feel fortunate that I can get out there in the ocean or sound and do it every day. Living in a place like Wrightsville Beach and having my family in the water well it doesnt get any better.”

Curry has been competing in surfing contests since the 1960s winning the Mens Division of the Eastern Surfing Championships. He was a member of the U.S. Surfing Team. In fact he participated in so many divisions of surfing competitions he is known as Mr. Iron Man among his peers.

“For me the whole surfing contest thing is not primarily about being the best. I used the competition as my yard stick to measure how much better I was getting year after year ” Curry says. “I felt like it would be a shame to surf for 20 years and not get better. I learned early on that I needed physical endurance mental focus and proper equipment to succeed.”

Foremost Curry is a versatile athlete one who was inspired by local athletic events and mentors. His first love is longboard surfing although he also enjoys shortboard surfing knee boarding body boarding skim boarding prone paddleboarding and tag team. In that mix he found legitimacy consistently using the fitness approach. All the while he made a study of surfing including ocean conditions surfboard design surfing contest tactics and other surfers. As he burst onto the sports scene he created a jubilant momentum while learning perfect practice makes perfect.

“Its the regularity you need in your life to keep yourself balanced. Surfing is my regular sport. The routine exercise benefits your life ” Curry says. “The fundamental characteristic of surfing is that its not a team sport. You paddle out. You decide which wave to catch. If you fail or fall you cant point the finger at anyone but yourself. As you learn that you learn to live in a truthful manner stay on the right track and become a good surfer.”

While many athletes would have concentrated on excelling in water-based activities alone Curry was inspired to become a dedicated tri-athlete. Swimming biking and running with unmatched confidence and commitment no one trained harder than Curry. He didnt stray too far from the water anticipated the ascent of standup paddleboarding and quickly learned the newest skill.

“Standup paddleboarding is incredible. Its surfing mixed with physical exercise into this stew that I cant get enough of ” Curry says. His strive for fitness are both personal and professional achievements. “From my perspective I grew up on Wrightsville Beach as a kid surfing and surfing has been my life. Anyone who lives the ocean lifestyle in and by the sea embraces the fact that the ocean can teach you things no person can. I love being in the ocean and Im raising my kids that way.”

The Greater Wilmington Sports Hall of Fame was formed in 2006 by then Wrightsville resident famed former head football coach Bill Dooley and a limited circle of like-minded professionals. The GWSHOF meets at annual induction banquets honoring those that have brought excellence and greater awareness to sports. The GWSHOF houses exhibits at the Cape Fear Museum of History and Science in Wilmington. The exhibits pay tribute to those individuals who have made an indelible mark on sports. Professional surfer Ben Bourgeois was inducted in 2010.

Bourgeois is the International Team Rider of Team Sweetwater sponsored by Sweetwater Surf Shop owned by his family in Wrightsville Beach. He became a professional surfer in 2001 and has been honored for his surfing achievements of national and international acclaim.

“I was definitely surprised about the hall of fame news ” Bourgeois says. “Its really cool they acknowledged my career surfing and its growth. Its a cool thing to get recognition in my hometown where I grew up. When I found out about it I made a special trip back home to receive the award. I wouldnt have missed it. Im glad to be a part of it.”

Bourgeois won two East Coast Surfing Championship titles and was named to the USA Team in 1996. His first international win came in Bali in 1996. Then he won titles in Japan in 2001 Barbados in 2006 and England in 2007. He has been a smashing success on the World Cup Tour for three years taking first place in 2008 then second place in 2009 at the Nike Pro in San Clemente California. Bourgeois set the gold standard at the World Surfing Games in Costa Rica and has graced six covers of international surfing magazines including Surfer Stab Transworld SKATEboarding Surfing Magazine and more.

“My career as a professional surfer is nonstop ” Bourgeois says. “A lot of opportunities in the surfing world come up last minute. A certain swell will pop up on the map. Then you have two days to get to the place to catch the swells. Surfers are driven to chase and ride good swells thats why a lot of the time its last minute.”

Bourgeois was born to surf. A New Jersey native he laid his foundation for surfing on Wrightsville Beach when his family relocated to Wilmington. He brought with him a fresh excitement to the areas surfing crowd. His ripping maneuvers have become dependable judge and crowd pleasers. A cut above the rest Bourgeois is a leading representative of a group of young professional surfers who rely on a new approach to speed quickness and innovation. This new era of globetrotting professional surfers charge the surf with exploding air shows tail slides and innovative radical maneuvers of their own creation. A role model to many gaggles of young and mature surfers are inspired by our hometown hero.