Wrightsville at the Root 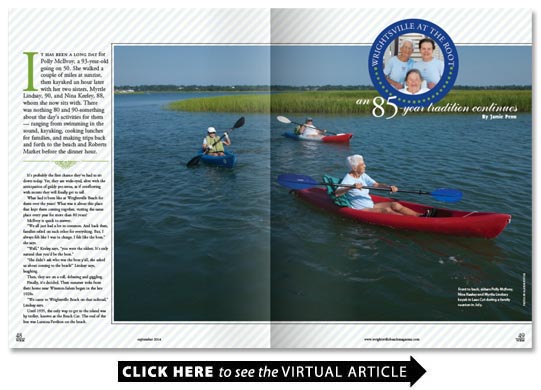 It has been a long day for Polly McIlvoy a 93-year-old going on 50. She walked a couple of miles at sunrise then kayaked an hour later with her two sisters Myrtle Lindsay 90 and Nina Keeley 88 whom she now sits with. There was nothing 80 and 90-something about the day s activities for them — ranging from swimming in the sound kayaking cooking lunches for families and making trips back and forth to the beach and Roberts Market before the dinner hour.

It s probably the first chance they ve had to sit down today. Yet they are wide-eyed alive with the anticipation of giddy pre-teens as if overflowing with secrets they will finally get to tell.

What had it been like at Wrightsville Beach for them over the years? What was it about this place that kept them coming together visiting the same place every year for more than 80 years?

McIlvoy is quick to answer.

We all just had a lot in common. And back then families relied on each other for everything. But I always felt like I was in charge. I felt like the boss she says.

Well Keeley says you were the oldest. It s only natural that you d be the boss.

She didn t ask who was the boss y all she asked us about coming to the beach! Lindsay says laughing.

Then they are on a roll debating and giggling.

Finally it s decided. Their summer treks from their home near Winston-Salem began in the late 1920s.

We came to Wrightsville Beach on that railroad Lindsay says.

Until 1935 the only way to get to the island was by trolley known as the Beach Car. The end of the line was Lumina Pavilion on the beach.

We came as often as we could in the summer so mother could breathe easier Keeley says. She had bad asthma and the salt air helped.

It was all so different back then McIlvoy says. Where we stayed there were no sinks. We had a wash basin and slept on little pallets mother would lay out for us.

Memories trail from hours spent on the beach with their sister Jackie Shelton collecting seashells wading out so deep the foursome would hold onto a rope to create a chain so they could collect more shells on the sand bar. Shelton died in 2003 at age 80.

Their voices drop a notch when they talk about sneaking Shelton a teenager at the time in from late nights at Lumina Pavilion where she sang and performed in talent contests.

Oh could she sing McIlvoy says then bursts into a rendition of Stormy Weather.

Don t know why there s no sun up in the sky  — that was her favorite McIlvoy says. She was so good.

Lumina was a haven for young people of the day. Although the girls spent time on many southeastern beaches including Myrtle Beach and Kure Beach their hearts and the action were here.

Mother would roll over in her grave if she knew all the things we did McIlvoy says then smiles and fidgets a little. Well I just mean staying out past our curfew.

Lindsay chimes in to change the subject her eyes glossy with memory.

Mother loved to fish she says. I remember she used to go to Kure Beach on fishing trips with her girlfriends. She mostly surf-fished but she d fish from the piers and such too. She could stay out there forever.

As the girls grew up and prepared to have families of their own the Wrightsville Beach tradition continued. McIlvoy was the first to marry and when her husband Dr. Daniel McIlvoy returned from war he continued on his path as pediatrician-in-training and signed on as a resident at Babies Hospital on Wrightsville Sound in 1946.

We just couldn t get away from this place McIlvoy says.

That s when the fishing really began she says. They moved into an apartment for one year below a long-time Wrightsville Beach resident Paul Hines on North Channel Drive. Within months they became fixtures on his fishing and shrimping trips.

Mother used to love to come visit us McIlvoy says. All those fish. She was in heaven.

We d catch so many fish Paul used to tell us he d baited the water before we came out Keeley says.

When the four sisters started families and life got busy they still found time to meet on the beach. McIlvoy was the first with three girls. Lindsay and Shelton followed having two and four respectively. Keeley had one child per year for nine years in a row eventually rearing 15. Life jackets served as beach babysitters.

I remember all those little orange life jackets bopping up and down the beach Lindsay says.

Summers spent in Young Apartments holding kite-flying contests and building forts on Shell Island are among their memories of raising little ones here but most of the memories for the rest of the family especially the younger Keeley kids and the grandchildren began at the beach cottage at 7 West Atlanta Street on Banks Channel. The McIlvoys bought the house from Mr. Newell of Newell s variety store in 1971.

The sisters would sit at McIlvoy s big yellow Formica table peeling pounds of shrimp going on about the fish they caught that morning the sides they would fix for dinner the latest report from the priest at St. Therese Catholic Church or how one of them put less sugar in their ice cream than the other.

You just don t need that much sugar McIlvoy would say.

Photos of 50 or more people on the cottage porch capture family gatherings before the more than 40 grandchildren came along.

The house is gone now demolished in 2002 after it was sold. The patriarchs all of whom have passed rest in the heart of the family. But these women who have held their families in their palms continue the tradition that has brought this sprawling family together year after year.