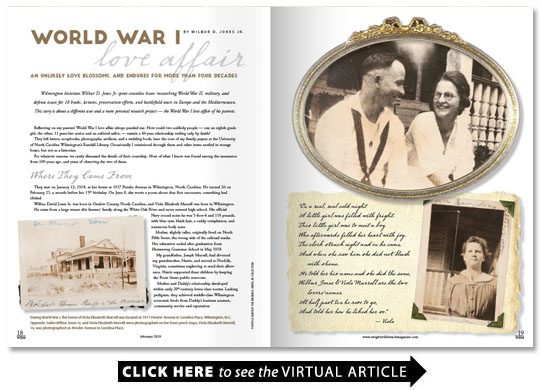 Wilmington historian Wilbur D. Jones Jr. spent countless hours researching World War II military and defense issues for 18 books lectures preservation efforts and battlefield tours in Europe and the Mediterranean. This story is about a different war and a more personal research project — the World War I love affair of his parents.

Reflecting on my parents’ World War I love affair always puzzled me. How could two unlikely people — one an eighth-grade girl the other 11 years her senior and an enlisted sailor — sustain a 46-year relationship ending only by death?

They left letters scrapbooks photographs artifacts and a wedding book later the core of my family papers at the University of North Carolina Wilmington’s Randall Library. Occasionally I reminisced through them and other items nestled in storage boxes but not as a historian.

For whatever reasons we rarely discussed the details of their courtship. Most of what I know was found among the mementos from 100 years ago and years of observing the two of them.

Where They Came From

They met on January 13 1918 at her home at 1917 Pender Avenue in Wilmington North Carolina. He turned 26 on February 25 a month before her 15th birthday. On June 8 she wrote a poem about that first encounter something had clicked.

He came from a large tenant dirt farmers’ family along the White Oak River and never entered high school. His official Navy record notes he was 5-foot-4 and 119 pounds with blue eyes black hair a ruddy complexion and numerous body scars.

Mother slightly taller originally lived on North Fifth Street the wrong side of the railroad tracks. Her education ended after graduation from Hemenway Grammar School in May 1918.

“On a real real cold night

A little girl was filled with fright.

This little girl was to meet a boy

Who afterwards filled her heart with joy.

The clock struck eight and in he came

And when she saw him she did not blush with shame.

He told her his name and she did the same

At half past ten he rose to go

And told her how he liked her so.” — Viola

After Germany surrendered in November 1918 for six months in 1919 he treated Marines at a field hospital in Santiago Dominican Republic. American forces landed there during the 1916 Dominican civil war to protect U.S. and international interests.

The photograph album he assembled recorded primitive native existence and Marines at leisure.

Discharged in August 1919 he took a business course in Alexandria Virginia and in 1920 joined Wilmington’s Carolina Building and Loan Association for a 44-year career. The building at 201 Princess Street still stands.

“One day Uncle Sam gave him his cry

And then he bade his girl goodbye.

He has not been gone very long

But still her heart keeps him in song.

And now he’s trying to win her heart

Because he does not want to part.

“He wants to be where he can see

His little girl when he is free.

Each night she says a prayer for him

Who she has loved so well to win.

And when they settle down for life

Their handwriting his especially and expressions show a relative command of 1918 discourse passions and insightful uncertainties. Mother’s information is more detailed: sensitive to her life station loyal creative a lover dreamer and romantic poet whose thoughts waver between adult realism one week girlhood infatuation the next. Her lifelong patterns began appearing. With love for family and friends she matured into an active conscientious and respected community volunteer servant.

Mother enjoyed fantasizing about the future.

“If I loved a man I’d stick to him to & no one else can pull me away. Because I’m one of these kind. It will be a precious time when you come to see me. Oh! Gee I wish it was tomorrow.”

There is mention of a boyfriend named Garland.

“He came by and took pictures and said he is coming back but I don’t really know or care whether he does or not. He is a sentimental boy & I like him alright but you can tell he’s not used to going with the girls.”

She spiced gossip with relationship theories and judgments: “That which he soweth also shall he reap.” I suppose she acted like other girls of her generation and place and meant no harm. Through it all with Daddy’s participation she laid the foundation for an enduring marriage.

Homebound by economic and social standing she managed boredom by seeking outlets.

“It’s go go or do do something all the time. I’m chief cook and bottle washer. I need a rest but I don’t know where I will get it.”

Determining whether her jottings are originals or someone else’s is difficult. Meant for outside eyes or just hers?

It was always Wilbur although she jealously poked his Alexandria and Charleston experiences.

“Wilbur have you forgotten the first night you came here? I haven’t. I wonder who is that little Virginia maiden you are hearing from. Oh well I won’t get jealous.” Referring to “pretty girls ” she continued: “When you come back I’ll show you I know how too.”

From Wrightsville Beach: “You mean to tell me you don’t notice those good looking ‘little angels’ as I will call them. It isn’t natural in a boy not to. If you ever marry or go with any I want you to always think of the little girl [me] you met.”

How my Father accepted this disposition and nurtured their affection baffles me. He appears more settled and confident for after all he left the farm to patriotically volunteer for war service. He balanced her overtures with lower-key endearments today rather mushy. Remember he is 11 years older. Despite his roots he remained the quintessential Southern gentleman.

“Dear you know that if this war was over I hardly see how I could let you wait many more years that is if you would marry me.”

“Sweetheart I dream for you and I to be married for I know we could make a sweet little home. If I never come back [from the war] to be with you why you can hardly say that your best friend on earth is gone. Though Viola back to you I am coming and gee that will be the happiest time of my life.”

“My Dear Little Navy Boy: That picture is fine of you. But I really do think it would look better if you had on your glasses. I never did say that you were a bad looking guy did I?”

Imagine today an eighth grader and a grown man.

“I am still studying. I wish you could come to see me graduate. Memories memories dreams of love so true. Oh dear you know it’s not always the age that counts is it?”

He sent a graduation ring.

“I am sorry I was not by your sweet side when you opened the jewelry. My love for you has started to grow and now from the depths of my heart I do love you better than any one on God’s earth. I am glad your love for me is growing day by day. Dear I pray for you every day. Yes you are pretty and a healthy little girl. Dear it did sound so sweet to read that you expect to be mine in the near future. That gives me something to look forward to and live for.”

In writing about Charleston sailors “roughing up girls in town ” his religious upbringing surfaced.

“All boys and girls got to fall on their knees and ask the forgiveness of sin and try to live a true life for the nation has forgotten personal health and are going to the bad.”

“The Kaiser he went up the hill

To take a peek at France

The Kaiser he came down the hill

With bullets in his pants”

“Viola is my name.

Single is my station.

Happy be the little man

That makes the alteration.”

And: “When the cruel war is ended

And the boys all come back

Wonder who will rock the cradle

From late 1919 until their June 16 1921 wedding visits replaced letters. They were married in St. Andrews Presbyterian Church. She wore a navy blue coat-suit he a business suit. One bridesmaid and the best man. No reception. Immediately they boarded their honeymoon train to Washington D.C. Alexandria and Mount Vernon.

At the Capitol she wrote “Wilbur tried to get me to sit in the president’s chair but I would not do so — because at that time we had a Republican president.”

They visited his relatives in Maysville North Carolina.

“Dear old mother and father. They looked on this face of mine. They seemed to like it and told my husband they thought he did a very wise and intelligent thing by choosing such a girl.”

I’ve never fully solved the opening puzzle I posed except to appreciate deeply that their profound love never ended and consequently strongly influenced the positive way they prepared me for life.

How fortunate I am.

“Dear I cannot live without you

For life with you is in vain.

Come tell me that you love me

And ease my aching pain.

“Oh! I long for your smiling face

And your merry eyes of blue

To hold you always near me dear

And whisper that my love is true.

“I long for the day to claim you

For the time to call you my own.

In a bungalow of our own.” — Viola