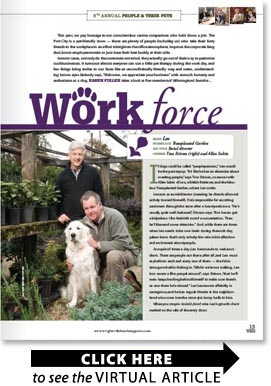 This year we pay homage to our conscientious canine companions who hold down a job. The Port City is a pet-friendly town there are plenty of people (including us) who take their furry friends to the workplace in an effort to brighten the office atmosphere improve the corporate feng shui boost employee morale or just have their best buddy at their side.

In most cases not only do the customers not mind they actually go out of their way to patronize such businesses. It turns out almost everyone can use a little pet therapy during the work day and few things bring smiles to our faces like an unconditionally friendly wag and warm understanding brown eyes. Nobody says “Welcome we appreciate your business” with as much honesty and enthusiasm as a dog. Karen Fuller takes a look at five members of Wilmingtons favorite …

If dogs could be called “people persons ” Leo would be the poster pup. “Its like he has an obsession about meeting people ” says Tom Ericson co-owner with Allen Sabin of Leo a British Retriever and the fabulous Transplanted Garden where Leo works.

Leo acts as social director (meaning he directs all social activity toward himself). He is responsible for escorting customers through the store after a hearty welcome. “Hes usually quite well-behaved ” Ericson says. “But he can get a bit jealous if he feels left out of a conversation. Then hell demand some attention.” And while there are times when Leo needs to be on a leash during the work day please know thats only to help him rein in his affection and excitement about people.

A couple of times a day Leo has rounds to make outdoors. There are people out there after all and Leo must say hello to each and every one of them thats his strong work ethic kicking in. “While were out walking Leo is so aware of the people around ” says Ericson “that hell even keep checking behind himself to make sure theres no one there hes missed.” Leos awesome affability is contagious and he has regular friends in the neighborhood who come into the store just to say hello to him.

When you stop in to visit dont miss Leos growth chart marked on the side of the entry door.

In an industry as fast-paced intense and demanding as mortgage banking its nice to have a little levity and fun around the office to break things up. Thats how Michael Lopez feels about the important role his Boston Terriers Kaytee (not pictured) and Misha play at the Alpha Mortgage office.

Kaytee age 13 has been coming to the office with Lopez since she was about nine months old. Kaytees apprentice Misha age 6 joined the company when she was just a baby and is learning the ropes from a pro.

“Kaytee and Misha are here for morale ” Lopez says. “They go from employee to employee visiting checking their cookie counts sitting on laps stealing toys from their desks and sometimes staying for a nap before moving on.” Kaytee also has the task of screening potential customers. “She growls if their credit is bad ” Lopez says. “Really. Shes 10 for 11 only been wrong once.”

While both dogs sometimes use a team approach to their diplomatic practice Misha spends the most time at the office nowadays with Kaytee making calls on occasional afternoons. The current division of duties calls for Kaytee to head up napping and general good-feeling disbursement while Misha is in charge of office hijinks and eliciting smiles and laughter. “Theyve always been naturals at the office ” Lopez says. “Theyre good-natured easy to train obedient and loveable.”

Most days at the famed Ivy Cottage youll find Daffodil under the front desk. The stores owner Sam Dunn says Daffodil waits there until shes ready for some attention then pops out to walk around the shop a bit.

Daffodils personality sweet and demure suggests royal upbringing but this charming mutt actually hails from a trailer park in South Carolina. “I bought her while I was at an auction. Someone was selling puppies there half poodle and half something else ” says Dunn. “Im not sure what kind of dog she is. Her personality is a little crazy but mostly sweet.”

Daffodil now grown to 17 pounds has been accompanying Dunn to the Ivy Cottage since she was just a six-week-old puppy. “She grew up here. I even had an employee who would bring her infant the same age as Daffodil in to work ” remembers Dunn. “The two little ones would sleep together behind my desk.”

Maybe its because her formative months were spent with a little human friend that Daffodil is so good with children today. “Neighborhood kids come to visit her. And on our breaks we walk around to let her visit people she knows who live and work on the streets around the store ” says Dunn. “Shes pretty well known.”

In fact The Ivy Cottage is well known for its furry assistants Dunn lets employees bring in their canines from time to time. Youll often find Winston the Maltese in the jewelry department and Stinker Bell the little 2 -pound Chihuahua in Building 2. There used to be a rescued Italian Greyhound named Rosie in building three but she retired.

Dunn says that on work days when Daffodil realizes its time to go in she gets very perky. At work she sets the tone for that vintage Ivy Cottage-relaxed-shopping atmosphere by snoozing behind Dunns desk. When its time for a snack she promotes customer interaction by letting shoppers bring her a cookie. And she is welcoming and responsive when people come in to see her under the guise of shopping at the store. Dunn understands. “Shes so friendly and sweet. People have to come in for a pick-me-up.”

In a store filled with treasures Butterbean stands out as a rare find indeed. Shes scruffy and unassuming for someone with a pedigree and her attitude invites customers to stay and visit to browse a little longer and to find some time to play.

When customers come into Maggies Antiques the year-old Shih Tzu pup jumps into service not just as a greeter but as an ambassador of goodwill. “She is playful and warm ” says Betty Biaggi owner of both Maggies Antiques and Butterbean.

When you think of a Shih Tzu you might imagine a high-maintenance fancy-pants pet with a perfect coif and silky bows. But not Butterbean. Shes a wiggly fluffy little sparkplug whose enthusiasm is contagious. Her wavy coat is a tad unruly and her ears swing into her face. She makes a lot of motion without exactly running around and she totes along her favorite teddy: a stuffed dog identical to her in size and color. “She even drags it into her bed for naps ” Biaggi says.

Biaggi says Butterbean has changed everything for her and for Maggies. “She completely changes the atmosphere here in the shop ” she says. “Butterbean brings people up if theyre a little down and makes everyone smile when they come in the door.” All in a good days work.

Border Collies Cammie and Digit find that a team approach works best when it comes to managing affairs at the Stone Garden.

Cammie a seven-year-old female runs the business end of things serving as protector of the grounds. “Every morning when she comes in she does a quick lap around the yard to make sure nothing is out of place or amiss ” says Nina Brown owner of Stone Garden. “She likes for everything to be in order.” If its not Cammie will give Brown a gentle poke to get her attention. Once morning rounds are complete Cammie heads to the office for the first cookie of the day. Next its on to business as usual helping customers play fetch. “Cammie is a little ball obsessed ” Brown admits.

Meanwhile after his morning cookie five-year-old Digit (named for his unique right paw which has six toes and seven toenails) warms up to start his demanding and important duties as head greeter. “He is the sweetest Border Collie Ive ever had ” says Brown. “He is very very friendly and he lets kids hang all over him.” Digit is also in tune with his breeds instincts regularly herding the forklift to keep it in line. Whats more he delights visitors by spinning around in circles mimicking any wheels or circular saws that happen to be in motion on the grounds.

Cammie and Digit are the two latest in Browns brood of rescued Border Collies who have been an integral part of the Stone Garden staff. Brown says there have always been at least two to three Borders at work there and at one point there were five. “Ive gotten them all through rescue groups and they all have wonderful quirks ” says Brown. “But I couldnt imagine being here without them.”

Even the shops logo has a Border Collie on it. “These dogs are an important part of the Stone Gardens unique identity ” Brown explains.