A safe anchorage on Lollipop Bay is a visionary refuge 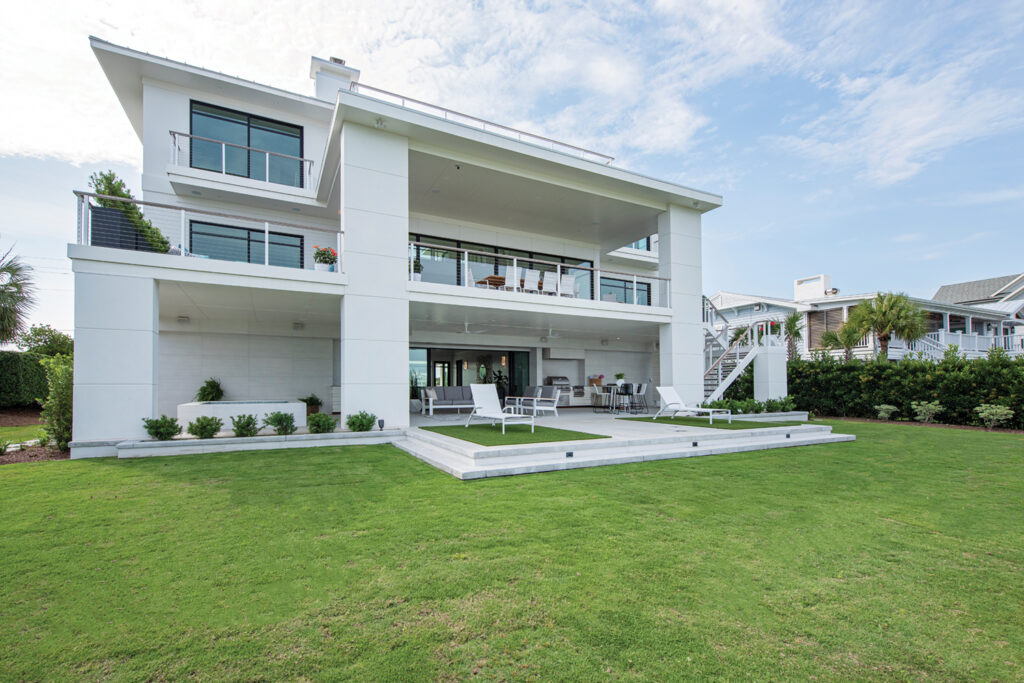 Architect David Lisle, of Wilmington and Raleigh, designed the recently completed home on North Lumina Avenue and modeled the contemporary exterior and interior after a classic international style. Photo by Bonnie-Jeanne Berg

Bobby and Cindy Lewis waited years to build this dreamy sandcastle after Hurricane Florence destroyed their beloved vintage beach cottage in 2018. Faced with change, they could go the grandfather way or embrace the zoning codes. That left the couple with only one clear choice — to move onward, and upward.

Crossing the threshold of the very contemporary yet very livable resort-style home is like stepping into the lobby of an island hotel.

Inviting outdoor spaces awaiting the arrival of family and guests provide an amenity-rich setting with sounds of rolling surf and the gentle lap of waves against the bayside bulkhead.

Whether they arrive by land or by boat, they are welcomed into this sheltered breezeway that connects the beauty of the place with the man-made desire to frame it and anchor it with a few favorite things.

From the palm-lined garden entrance designed by Mike Edge of Edge Land Company to the lush plant-filled atrium tended by Foliage Design, the tranquil north island vibe is set. Intimate gatherings may suggest a twilight dip in the hot tub. Or, in a small group setting, a contest of wits around the white lacquer, waterfall edge pool table. Yet when called into action, this ground-level space expands to embrace the Lewis’s entire guest list to enjoy a shrimp boil in the hot summer months, and from fall through the winter, an oyster roast over the outdoor, gas-fired Charlotte Grill.

A double linear firebox offers ambiance and a subliminal screen of privacy for hot tubbers, while the surrounding stucco column subtly defines the open spa from the floating living room.

Cindy and Bobby take their morning coffee on the east facing oceanside deck, but their afternoons are spent on the west facing deck and back veranda looking across the bay.

“We have the most spectacular sunsets on the beach,” Cindy says.

The couple pushed the design envelope, requesting porches for each bedroom and a rooftop deck that extends the Wrightsville Beach height restriction to its zenith. Yet, just shy of 40 feet is where they want to be for a spectacular view that stretches north to Figure Eight Island and south along the Intracoastal Waterway to the Heide Trask Bridge and the mainland.

“The Lewises were a unique couple that required a fine balance between practical needs and a clean, modern, open feel,” says architect David Lisle. When the couple hired Whit Honeycutt of North State Builders — and with project manager Carson Boone — the team tweaked the original plans. Honeycutt introduced the couple to interior designer Hooper Patterson.

A rooftop deck, nearly hidden from view from the waterfront facade, may be the perfect perch for morning exercise. And, with its highest elevation scraping 40 feet, the Lewises are that much closer to the moonrise over the ocean or the stars at night.

Finding the right furnishings was a challenge given the openness of the space and exposure to outdoor elements. Patterson says all the fabrics used throughout the house are high-performance, indoor-outdoor textiles.

Cindy Lewis had an idea and then found Edgar Zaga of ABZ Upholstery in Raleigh to make it. Cindy noticed Zaga did some marine work and believed he was the perfect collaborator. Together they created the sectional seating array that anchors this space. Upholstered with resilient rain, UV ray and microbial resistant fabric, Cindy worked with project manager Boone to secure it to the deck.

“So, it doesn’t have to be removed,” she says. Considerations had to be made to make sure inner rainproofing membranes would not be punctured, or any part of the furniture blown away in a storm.

Boone attached the sectional to the rooftop during the design-build process. “Carson takes the vision and makes it happen. He and I really jived. He’s a perfectionist.” Cindy says. “I love the design process and coming up with things like that.”

“This house was intended to impress with the overall space and light,” says Lisle. All spaces flow with open water views from the ocean to Lollipop Bay.

“When we sat down, they had a lot of inspirational photos,” Patterson says. “One was a ceiling they saw during their travels. It was a major focal point in the mix early on.” The challenge: “How to pull the color scheme around that.”

The sand dollar ceiling is a sensation by day or night. “The waves are made of Styrofoam — the sand dollars are laser cut and powder coated,” Patterson says. Though the sand dollar ceiling was on the table when Patterson joined the team, she credits 100 percent of the design to Cindy and Jim Dautremont of Raleigh, who designed the piece that measures 24 feet long. The slightest variance in each computer-designed Styrofoam wave strand creates the illusion of wave sets rolling onto shore. Made in Raleigh, three 8-foot panels were assembled on site.

The sand dollars and sand dollar clusters are backlit against the Kindle Charcoal, Benjamin Moore, ceiling.

“The sand dollars were important to us,” Cindy says. Citing the sand dollar’s symbolism drawn from the biblical legend — the release of five white dove-shaped pieces when broken — combine to shower a message of peace and joy upon all who experience it. “We hope the same for anyone, who revels under it,” Cindy says.

“Our lighting is one of our favorite unique fun touches in our home,” she says. “I call it our jewelry.”

That illuminated jewelry is reflected in finishes like lustrous silver and white cork tiles, and furnishings like luminous acrylic dining chairs around a high gloss white lacquer dining table.

“During most of my new construction projects, we have an overall vibe we’re going for,” Patterson says. “We make selections on flooring, tile, countertops; that’s step one: nailing down the finishes. That leads to paint colors and furnishings.”

The white and black interior is etched in the sand dollar ceiling, minted in the baby grand and framed in sliding window walls and fixed transoms. Warmth was introduced by sandy beach views from these rooms. The quartzite countertops were selected for the natural nuances found in organic patterns like the littoral, where the ocean meets the sand.

“A lot of the color palette was taken from the countertop in the kitchen,” Patterson says, “gray and cream, with touches of pale blue and taupe. Then it was all about bringing in texture — textured linen, the coffee table is lacquered linen — basically bringing in those finishes in those same color tones. Layering texture and subtle patterns to warm it up, especially the tile in the main spaces. The white textured backsplash has a wave pattern that speaks to the ceiling in the living room.”

The soaring great room ceiling towers beside the upper loft that spans the width of the home. The continuous open stair that begins at the lanai level ascends to the third floor where the shared lounging area furnished for reading and relaxation is shared by the couple’s young adult children and overnight guests. Four bedrooms fan out from this central gathering area. Two suites have waterway views, the others share oceanside views.

“I love the uniqueness of it, the use of the outdoor spaces for living,” Patterson says. “They wanted the spaces to entertain well. I loved seeing how the house entertained. They had a 30th anniversary party. It was amazing. They had a band on the upper deck, they tented down below. I love how beautiful it is and still so functional. We used a lot of high-quality furniture — the lines of the furniture are beautiful. Everything was done in performance fabrics. It’s so unique, it’s definitely more modern than projects I work on in this area. I love that the clients are so happy with it. She really wanted somebody she could collaborate with throughout the process. Rather than somebody imposing their ideas, she wanted somebody that was going to listen to her vision, giving them a home that is uniquely theirs.”

“The house that was here before was called Sun Up & Sun Down,” Cindy says. “We call this one Nuevo Sol. Some people call it the Glass House,” she laughs. From the southern garage entrance, a glass elevator carries passengers and groceries and luggage to the upper floors while showcasing views that span from ocean to sound.

The master bedroom completes the spacious first level living area. The en suite bedchamber, walk-through closet dressing rooms, and bath are tucked within the vast 10,000-plus square feet of total, livable space — almost 5,000 conditioned and the rest outdoors. Hidden from view yet exposed to the wonders of the surrounding waterside, Cindy calls it their sanctuary.