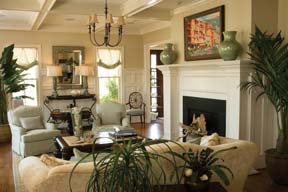 The white picket gate swings openand the sound of happy feet springs up the brick-lined walk at the home of Bob and Roberta Wishart. From the verandah four-legged Callie’s muffled woofing becomes clearer as the footsteps draw closer to the front door.

Giggling children are met by the family’s rescue dog — part Pyrenees part golden retriever — as the door opens into an environment that blends a cultured lifestyle with an unbridled zest for living in the moment where the interior living rooms are unencumbered by walls. Instead windows welcome the sunlight and invite the beauty of the landscaped courtyards indoors and Handel’s classic water music is underscored by the gentle splash of fountains spilling from the bricked trellis wall into olive urns.

When their grandchildren arrive — Savannah 9 Andrew 7 Annabelle 4 and Isabel 2 — the boys Bob and Andrew fetch their fishing rods and tackle boxes and head down sun-kissed Olmstead Lane to one of the freshwater ponds that surround the Parkside at Mayfaire neighborhood. The scene could be a rerun of an Andy Griffith show set in rural North Carolina where the passions of one generation are passed to the next.

“It’s catch and release ” Roberta says. “We let him (Andrew) keep one fish.””It’s still in the freezer ” Bob adds tongue in cheek.

The couple who moved from Burlington to Wilmington to be nearer to their grandkids relish every moment spent with the family.

“We’re five minutes from anything we need or want to do but when you’re back here you feel like you’re in the country ” Roberta says. “It’s so nice. There are families with young children old geezers like us everything in between.”

“Burlington has a lot to offer ” Bob says “but it’d be hard to match Wilmington for the broad spectrum of athletic cultural and recreation amenities.”

The couple was first attracted to the coast because of the beaches. In 1996 they ventured to Topsail Island. “Just on a whim we decided to take a look fell in love and found a place within 48 hours of going up there the first time ” Bob says. 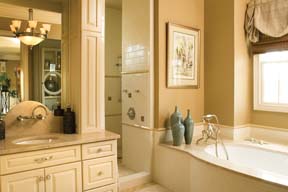 Several years later when their oldest granddaughter was born they relocated permanently settling in Parsley Woods on Bradley Creek where they lived for three years. Initially they thought that might be their retirement home “but it didn’t live the way we wanted it to ” Roberta says.

And then the Wisharts found Parkside at Mayfaire.

Bob a civil litigation attorney practices in Charlotte and commutes the four hours and two minutes door to door every week.

“When I spend a week down here or three or four days … I just kind of settle in. It’s nice to get a feel of the community and not be rushed ” he says.

Holiday events held in Parkside’s pond-side gazebo which adjoins the Wisharts’ property and New Year’s Eve celebrations hosted by their neighbors have drawn the Wisharts closer to their community.

“Bob gets a lot of giggles because he likes to sit here in the summer when the fountain is going and read and of course that leads to a nap ” Roberta says. The stacked porches on the east and south sides of the house are very visible to the street. “His napping schedule in the summer is noted by the neighbors and usually the dog is curled up in the other chair with him. We live out there when the weather permits.”

For the first time ever Bob and Roberta have a house that truly accommodates the way they wanted to live. Built by Whitney Blair completed in 2007 the house has been an award-winner for the builder Jeff Sanderson earning him the highest of accolades from the North Carolina Home Builders Association and the National Association of Home Builders. Just last month Sanderson was named Southern Living Builder of the Year. 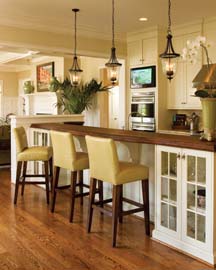 “From every space to be able to see something pretty — seating areas at every window easy access to the side porches the charm of extending the living space inside ” Roberta says is pleasing to her as are the open kitchen dining and living room mapped out with Allison Ramsey Architects in Beaufort South Carolina.

Throughout the home artist’s touches warm the walls. David Nance’s European streetscape is displayed above the mantel and his 7-by-8-foot abstract painting commissioned by the Wisharts for their Parsley Woods home was pared down to four large canvases that line the spacious 4-foot center hall passageway.

Roberta an artist herself befriended Nance and Rodney Moser who came to Topsail and left her with a watercolor study of the dense live oak palisade that surrounds the southern end of that island getaway. The painting hangs in an upstairs bedroom while another of Moser’s hangs in the Wisharts’ winter getaway the suite of rooms above their detached garage.

“In the cold months we spend a lot of time up over the garage where we have an office and a studio ” Roberta says “and an in-between space for playing bridge.” With windows that overlook the backyard they are never too far from home.

In warmer weather their garden is like an oasis enclosed by pairs of 100-year-old wrought iron gates with oversized poured-concrete pavers individually formed then textured placed in the lawn suggesting a floating patio.

“You can mow the yard with a pair of scissors ” Bob jokes.

Under a 30-year-old crape myrtle tree that was spaded from another yard and transplanted into the Wisharts’ a miniature Chippendale garden bench given to Roberta by interior furnishings designer Cynthia Huffines has provided the backdrop for photographs of each of the Wisharts’ grandchildren. 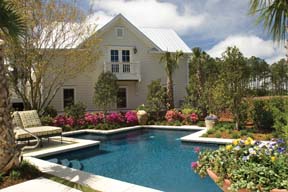 Landscape architect Josh Mihaly of Mihaly-Cirello earned Roberta’s favor when he imported his native West Coast aesthetic into the design of the outdoor rooms uniting terraced courtyards with cooking and dining areas and the heated pool and decks.

Splashing water the squeals of children playing the sizzle of grilling fish the tinkle of ice cubes in a glass and the final ovation of the songbirds roosting for the night spread like a smile beneath a canopy of Carolina blue sky that dissolves into golden sunsets.

Reminiscent of Mayberry it’s a white-picket-fence world at the Wisharts. Bob says “We’re out there from morning to bedtime.”