Winter Workout: What to Wear 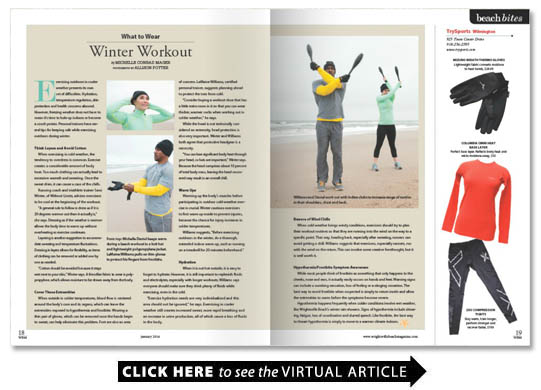 Exercising outdoors in cooler weather presents its own set of difficulties. Hydration temperature regulation skin protection and health concerns abound. However freezing weather does not have to mean its time to hole up indoors or become a couch potato. Personal trainers have several tips for keeping safe while exercising outdoors during winter.

When exercising in cold weather the tendency to overdress is common. Exercise creates a considerable amount of body heat. Too much clothing can actually lead to excessive warmth and sweating. Once the sweat dries it can cause a case of the chills.

Running coach and triathlete trainer Sami Winter of Without Limits advises exercisers to be cool at the beginning of the workout.

A general rule to follow is dress as if it is 20 degrees warmer out than it actually is she says. Dressing as if the weather is warmer allows the body time to warm up without overheating as exercise continues.

Layering is another suggestion to accommodate sweating and temperature fluctuations. Dressing in layers allows for flexibility as items of clothing can be removed or added one by one as needed.

Cotton should be avoided because it stays wet next to your skin Winter says. A friendlier fabric to wear is polypropylene which allows moisture to be drawn away from the body.

When outside in colder temperatures blood flow is centered around the bodys core and its organs which can leave the extremities exposed to hypothermia and frostbite. Wearing a thin pair of gloves which can be removed once the hands begin to sweat can help eliminate this problem. Feet are also an area of concern. LaMaine Williams certified personal trainer suggests planning ahead to protect the toes from cold.

Consider buying a workout shoe that has a little extra room in it so that you can wear thicker warmer socks when working out in colder weather he says.

While the head is not technically considered an extremity head protection is also very important. Winter and Williams both agree that protective headgear is a necessity.

You can lose significant body heat through your head so hats are important Winter says. Because the head comprises about 10 percent of total body mass leaving the head uncovered may result in an overall chill.

Warming up the bodys muscles before participating in outdoor cold-weather exercise is crucial. Winter cautions exercisers to first warm up inside to prevent injuries because the chance for injury increases in colder temperatures.

Williams suggests before exercising outdoors in the winter do a thorough extended indoor warm up such as running on a treadmill for 20 minutes beforehand.

When it is not hot outside it is easy to forget to hydrate. However it is still important to replenish fluids and electrolytes especially with longer workouts. Williams says everyone should make sure they drink plenty of fluids while exercising even in the cold.

Exercise hydration needs are very individualized and this area should not be ignored he says. Exercising in cooler weather still creates increased sweat more rapid breathing and an increase in urine production all of which cause a loss of fluids in the body.

When cold weather brings windy conditions exercisers should try to plan their workout routines so that they are running into the wind on the way to a specific point. That way heading back especially after sweating runners can avoid getting a chill. Williams suggests that exercisers especially runners run with the wind on the return. This can involve some creative forethought but it is well worth it.

While most people think of frostbite as something that only happens to the cheeks nose and ears it actually easily occurs on hands and feet. Warning signs can include a numbing sensation loss of feeling or a stinging sensation. The best way to avoid frostbite when suspected is simply to return inside and allow the extremities to warm before the symptoms become severe.