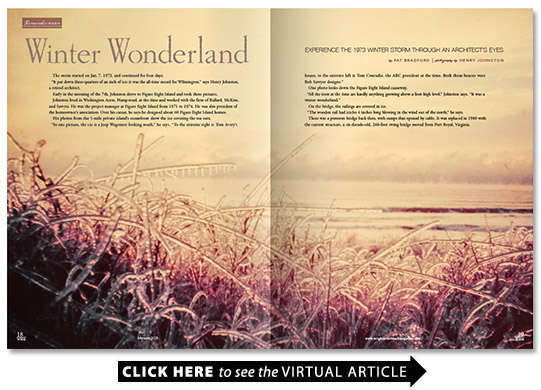 The storm started on Jan. 7 1973 and continued for four days.

“It put down three-quarters of an inch of ice; it was the all-time record for Wilmington ” says Henry Johnston a retired architect.

Early in the morning of the 7th Johnston drove to Figure Eight Island and took these pictures.

Johnston lived in Washington Acres Hampstead at the time and worked with the firm of Ballard McKim and Sawyer. He was the project manager at Figure Eight Island from 1971 to 1974. He was also president of the homeowner’s association. Over his career he says he designed about 60 Figure Eight Island homes.

His photos from the 5-mile private island’s oceanfront show the ice covering the sea oats.

“In one picture the car is a Jeep Wagoneer looking south ” he says. “To the extreme right is Tom Avery’s house to the extreme left is Tom Conradie the ABC president at the time. Both those houses were Bob Sawyer designs.”

One photo looks down the Figure Eight Island causeway.

“All the trees at the time are hardly anything growing above a foot-high level ” Johnston says. “It was a winter wonderland.”

On the bridge the railings are covered in ice.

“The wooden rail had icicles 6 inches long blowing in the wind out of the north ” he says.

There was a pontoon bridge back then with ramps that opened by cable. It was replaced in 1980 with the current structure a six-decade-old 260-foot swing bridge moved from Port Royal Virginia.

A month later in February 1973 the greatest snowstorm up until that time occurred with snow that exceeded 12.5 inches. It held the record up until the 1989 Christmas storm dumped 15.3 inches on the Wilmington area.