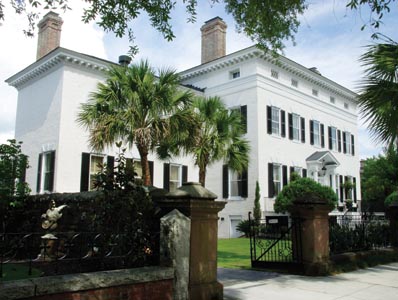 When Ron and Cindy Pickett drove down Front Street for the first time they passed the Governor Dudley Mansion. Ron turned to Cindy and said “That house has my name on it.”

That was 10 years ago. Last spring the prediction became a reality when Pickett plucked the landmark dwelling from desolation paying $2 million as is for the 15 000-square-foot house at 400 South Front Street. As it was divided into apartments and then abandoned the Dudley Mansion had languished for several years before the Picketts came to its rescue. 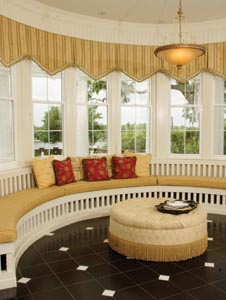 Ron confesses a passion for the Federal style. The look like a pocketful of shiny new coins was minted on the face of American architecture during the late 18th century. In his Washington D.C. hometown the Federal style embodied by The White House was the currency of the time. Picketts Dudley Mansion at 400 South Front Street in Wilmingtons historic district shares all of the attributes of the parent style.

Interior walls on all four levels were removed to restore the house to a single-family dwelling for Ron and Cindy and their two young-adult children Parlette and Marshall.

Oak floors and original wainscoting found throughout the home were restored. Two patterns authentic to the structure repeat themselves in exterior and interior detailing: crown dentil molding found on the facade and reiterated in the formal areas and the grand hall and a harlequin pattern found in window mullions floor tiles and fireplace surrounds.

Cindy worked with a team of interior designers to redecorate the home. Kitty DeMaria of Frog in the Drawer and Karen Johnson of Karen Johnson Interiors started working on the project last June. Both designers developed color palettes for each room working with the couples collection of Asian art much of it collected in Hong Kong during Rons early career years and Oriental rugs. 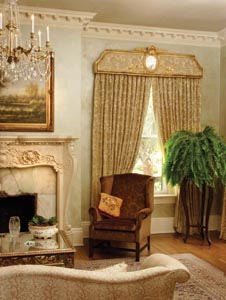 “Cindy has really nice taste and wonderful ideas ” says DeMaria. “Shes very fun to work with. Neither Cindy nor Ron is afraid of color ” she emphasizes.

One of the biggest challenges DeMaria found was working around the rugs. “Rugs make a huge statement ” she says. “In a room they anchor everything.”

The designers were also responsible for the spatial orientation of each room scaling the furnishings to the size of the rooms and specifying the fabrication of custom window treatments bedding and upholstery. Johnson says her biggest challenge was coordinating all of the subcontractors within the compressed time frame for finishing the project.

Balance and harmony are brought into the home through the artistry of Jan Miles who breathed vitality into each room she touched with her thoughtful murals and faux finishes.

Miles studied drapery and upholstery swatches provided by the design team then each space individually absorbing the character and field of light before brushing color onto the walls. 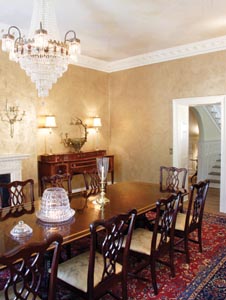 Miles who graduated from the University of North Carolina Chapel Hill with a degree in painting applied her artistry to the walls of the parlor for instance by creating swatches of colors inspired by the green onyx mantel and fireplace surround. She visited the dining room at night and developed its concept under chandelier light.

For a small powder room Miles painted wood panels to look like marble. In the family room she applied a chocolate suede. In an upstairs bedroom she matched the carved four-poster bed and a beaded chandelier with a bronze ceiling applied like a basket weave.

For the center hall Miles chose a traditional French chinoiserie style of painting on silk to create ethereal Asian images trees rocks and peacocks. Each of the four canvas panels was painted in her studio on a background of iridescent peach and over-painted with taupe and white.

The center hall leads past the parlor and the dining room to a formal receiving area embellished with Ionic pilasters and French doors. Paintings of a Chinese emperor and an empress hang on the interior wall a wedding
present from the Picketts to one another. A black lacquer baby grand piano anchors the room which opens to the solarium to the west. 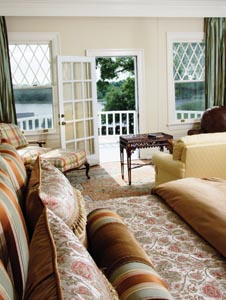 Returning the formal spaces to their lost grandeur was achieved with luxurious drapery antique furnishings with fresh upholstery period paintings and portraits of the couples children.

Collectible set pieces such as a sculpted bronze American bald eagle in the parlor the 1760 mahogany chest-on-chest dining room chairs from the Mayflower Hotel and a 500-pound gilded
mirror over the staircase that was found in the house have been strategically placed to balance each room. The center hall parlor dining room and reception hall are crowned by fabulous drop crystal chandeliers including a matched pair one of which was original to the house.

From the reception hall the house spreads out in all directions. To the west toward the Cape Fear River the floor drops into the solarium tiled in black and white diamonds. An upholstered banquette follows the arc of the curved exterior wall and looks over the portico and the grass courtyard. Built-in bookshelves line the interior whose brickwork suggests that this was once the exterior wall and that the sunroom was a later addition.

The entrance to the north wing was originally from the reception hall but was redirected through the solarium to the kitchen. From the kitchen the Picketts enter their den where the only pine floors in the house are found.

In the south wing an arched entry from the reception hall leads to a corridor past a tiny alcove and a completely refurbished powder room on the way to the billiard room. 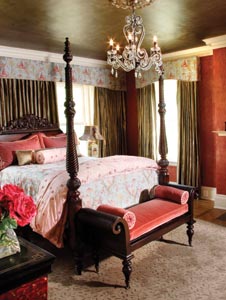 Bedrooms and bathrooms for the family of four are found on the second floor. At the top of the stairs to the right is Marshalls bedroom which
occupies the south wing. Continuous rows of windows face east and west and receive light at all times of day. To the left of the stairs Parlettes room overlooks Front Street and adjoins a bath and guest room.

The master bedroom balcony has unmatched views of the west lawn and the Cape Fear River. Built-in closets in the adjoining dressing room are inlaid with stained glass.

The Jack-and-Jill master bath has Travertine marble floors and green onyx countertops. Onyx veneer surrounds glass sinks lit from below. A pocket door separates the master bathroom from Rons office on the second floor of the north wing. Carpenter Mike Lewis whom Pickett describes as a tremendous artisan completed all of the homes cabinetry including the floor-to-ceiling mahogany paneling in the office.

The third floor of the Pickett home is used for entertainment with a game room card table and bar in one chamber and an adjoining in-house theater. The state-of-the-art media room was custom tooled by Steve Hertz of Audio Visions. The theater is furnished with 16 red velvet seats recovered from the Kennedy Center Opera House circa 1965. Other third-floor chambers are used for exercise and storage.

The ground-level English daylight basement once sectioned into apartments bears evidence of the old coal bin and the original kitchen with its massive fireplace. 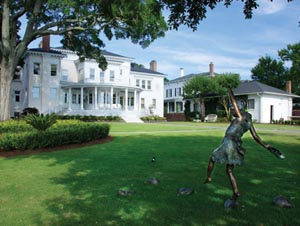 In 1974 when architectural historian Janet Seapker co-authored the National Register application for Wilmingtons historic district the Dudley Mansion was one of two individual houses in Wilmington cited for statewide significance. “Such designations ” says Seapker “allow the local Historic Preservation Commission to issue an eternal stay of execution should an owner want to demolish or substantially alter the building.”

The Picketts now join the distinguished legion of Dudley Mansion owners who have restored and remodeled the house at 400 Front Street. Even though it does not have their name on it the Picketts home is decidedly theirs.