BY Robert Rehder and Rick Stoker 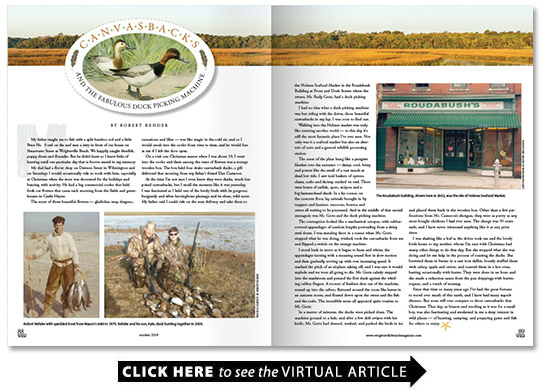 My father taught me to fish with a split bamboo rod and a little Penn No. 9 reel on the surf near a jetty in front of our house on Shearwater Street at Wrightsville Beach. We happily caught bluefish puppy drum and flounder. But he didn’t hunt so I knew little of hunting until one particular day that is forever seared in my memory.

My dad had a florist shop on Dawson Street in Wilmington and on Saturdays I would occasionally ride to work with him especially at Christmas when the store was decorated for the holidays and buzzing with activity. He had a big commercial cooler that held fresh cut flowers that came each morning from the fields and greenhouses in Castle Hayne.

The scent of those beautiful flowers — gladiolus snap dragons carnations and lilies — was like magic in the cold air and so I would sneak into the cooler from time to time and he would fuss at me if I left the door open.

On a visit one Christmas season when I was about 10 I went into the cooler and there among the vases of flowers was a strange wooden box. The box held four drake canvasback ducks a gift delivered that morning from my father’s friend Dan Cameron.

At the time I’m not sure I even knew they were ducks much less prized canvasbacks but I recall the moment like it was yesterday. I was fascinated as I held one of the lovely birds with its gorgeous burgundy and silver herringbone plumage and its clean wild scent. My father said I could ride on the next delivery and take them to the Holmes Seafood Market in the Roudabush Building at Front and Dock Streets where the owner Mr. Rudy Gertz had a duck picking machine.

I had no idea what a duck picking machine was but riding with the driver those beautiful canvasbacks in my lap I was soon to find out.

Walking into the Holmes market was truly like entering another world — to this day it’s still the most fantastic place I’ve ever seen. Not only was it a seafood market but also an abattoir of sorts and a general wildlife processing station.

The scent of the place hung like a pungent blanket over the entrance — damp cool briny and potent like the smell of a vast marsh at dead low tide. I saw iced baskets of oysters clams crabs and shrimp stacked on end. There were boxes of catfish spots stripers and a big hammerhead shark. In a far corner on the concrete floor lay animals brought in by trappers and hunters: raccoons beavers and otters all waiting to be processed. And in the middle of that surreal menagerie was Mr. Gertz and the duck picking machine.

The contraption looked like a mechanical octopus with rubber-covered appendages of random lengths protruding from a shiny steel drum. I was standing there in a trance when Mr. Gertz stopped what he was doing winked took the canvasbacks from me and flipped a switch on the strange machine.

I stood back in terror as it began to hum and whine the appendages turning with a moaning sound first in slow motion and then gradually revving up with ever increasing speed. It reached the pitch of an airplane taking off and I was sure it would explode and we were all going to die. Mr. Gertz calmly stepped into the maelstrom and pressed the first duck against the whirling rubber fingers. A torrent of feathers shot out of the machine soared up into the rafters fluttered around the room like leaves in an autumn storm and floated down upon the otters and the fish and the crabs. The incredible scene all appeared quite routine to Mr. Gertz.

In a matter of minutes the ducks were picked clean. The machine ground to a halt and after a few deft swipes with his knife Mr. Gertz had dressed washed and packed the birds in ice and placed them back in the wooden box. Other than a few perforations from Mr. Cameron’s shotgun they were as pretty as any store-bought chickens I had ever seen. The charge was 50 cents each and I have never witnessed anything like it at any price since.

I was shaking like a leaf as the driver took me and the lovely birds home to my mother whom I’m sure with Christmas had many other things to do that day. But she stopped what she was doing and let me help in the process of roasting the ducks. She browned them in butter in a cast iron skillet loosely stuffed them with celery apple and onion and roasted them in a hot oven basting occasionally with butter. They were done in an hour and she made a reduction sauce from the pan drippings with butter cognac and a touch of nutmeg.

Since that time so many years ago I’ve had the great fortune to travel over much of this earth and I have had many superb dinners. But none will ever compare to those canvasbacks that Christmas. That day as bizarre and startling as it was for a small boy was also fascinating and awakened in me a deep interest in wild places — of hunting camping and preparing game and fish for others to enjoy. 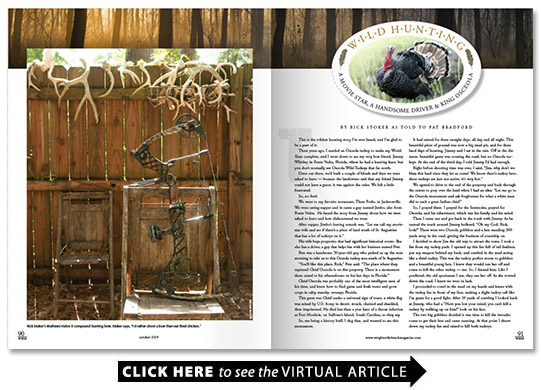 This is the wildest hunting story I’ve ever heard and I’m glad to be a part of it.

Three years ago I needed an Osceola turkey to make my World Slam complete and I went down to see my very best friend Jimmy Whitley in Ponte Vedra Florida where he had a hunting lease but you don’t normally see Osceola Wild Turkeys that far north.

Once out there we’d built a couple of blinds and then we were asked to leave — because the landowner said that my friend Jimmy could not have a guest it was against the rules. We left a little frustrated.

We went to my favorite restaurant Three Forks in Jacksonville. We were eating supper and in came a guy named Jimbo also from Ponte Vedra. He heard the story from Jimmy about how we were asked to leave and how disheartened we were.

After supper Jimbo’s leaving remark was “Let me call my movie-star wife and see if there’s a piece of land south of St. Augustine that has a lot of turkeys on it.”

His wife buys properties that had significant historical events. She also has a driver a guy that helps her with her business named Pete.

Pete was a handsome 50-year-old guy who picked us up the next morning to take us to this Osceola turkey area south of St Augustine.

“You’ll like this place Rick ” Pete said. “The place where they captured Chief Osceola is on this property. There is a monument there raised to his whereabouts on his last days in Florida.”

Chief Osceola was probably one of the most intelligent men of his time and knew how to find game and fresh water and grow crops in salty marshy swampy Florida.

This great war Chief under a universal sign of truce a white flag was seized by U.S. Army in deceit struck chained and shackled then imprisoned. He died less than a year later of a throat infection at Fort Moultrie on Sullivan’s Island South Carolina so they say.

So me being a history buff I dug that and wanted to see this monument.

It had rained for three straight days all day and all night. This beautiful piece of ground was now a big mud pie and for three hard days of hunting Jimmy and I sat in the rain.Off in the distance beautiful game was crossing the road but no Osceola turkeys. At the end of the third day I told Jimmy I’d had enough.

Right before shooting time was over I said “Jim why don’t we bless this land since they let us come? We know there’s turkey here these turkeys are just not active it’s very hot.”

We agreed to drive to the end of the property and back through the center to pray over the land when I had an idea: “Let me go to the Osceola monument and ask forgiveness for what a white man did to such a great Indian chief.”

So I prayed there. I prayed for the Seminoles prayed for Osceola and his inheritance which was his family and his mind.

Then I came out and got back in the truck with Jimmy. As he turned the truck around Jimmy hollered “Oh my God Rick look!” There were two Osceola gobblers and a hen standing 300 yards away in the road getting the business of courtship on.

I decided to show Jim the old way to attract the toms. I took a fan from my turkey pack. I opened up this fan full of tail feathers put my weapon behind my back and crawled in the mud acting like a third turkey. This was the turkey perfect storm to gobblers and a beautiful young hen. I knew they would run her off and come to kill the other turkey — me. So I fanned him. Like I predicted the old sportsman I am they ran her off. As she trotted down the road I knew we were in luck.

I proceeded to crawl in the mud on my hands and knees with the turkey fan in front of my face making a slight turkey call like I’m game for a good fight. After 50 yards of crawling I looked back at Jimmy who had a “Have you lost your mind you can’t kill a turkey by walking up on him!” look on his face.

The two big gobblers decided it was time to kill the intruder come to get their hen and came running. At that point I threw down my turkey fan and raised to kill both turkeys.

Jimmy said he’d been to world fairs and he had never seen anything like that.

But the harvest of these two turkeys brought with it a problem because you can’t kill two turkeys on the same day. I’m an honest man and I decided to turn myself into the local game authorities. Even though they both were big fat and beautiful I was about to lose one of these turkeys to the Florida Department of Wildlife and Fisheries.

Suddenly Jimmy says “Oh my gosh only God in you could pull this off.” He’d looked it up on the phone and found out that Florida is one of the few places you can kill two turkeys in the same day legally.

So we laughed and gathered my birds and drove off into the sunset. To only think: a movie star a handsome driver and King Osceola had all played a part in fulfilling my world slam with two beautiful Osceolas.