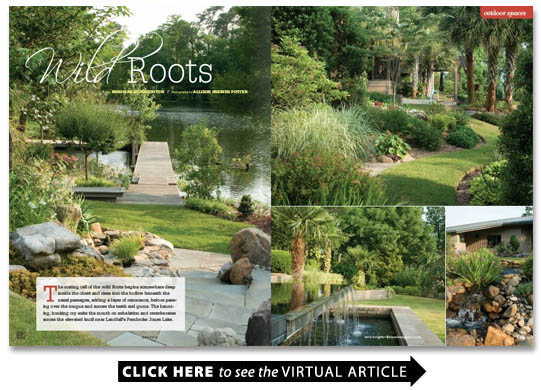 The mating call of the wild Roots begins somewhere deep inside the chest and rises into the hollow beneath the nasal passages adding a layer of resonance before passing over the tongue and across the teeth and gums. The haunting honking cry exits the mouth on exhalation and reverberates across the elevated knoll near Landfalls Pembroke Jones Lake.

Golfers playing a round on the Nicklaus Marsh course hearing the wild bird call might think their errant slice may have roused a nest of geese or ducks or swan but no. This is Chuck Roots way of signaling his mate Karen lost to him in the landscape that surrounds their home a lush garden that Karen has handpicked and planted since the couple chose this lot in 1996.

Chuck explains the bird call is used by everyone in the family to summon respective members of the flock.

Michael Moorefield had originally designed the house to be set back into the heavily treed lot. “Along came Hurricane Fran ” Chuck says. “The hurricanes send up little twisters. Theyre very short-lived but very intense. They took out 23 big trees on this lot.”

In a few minutes Karen appears in a wide-brimmed mesh Aussie sun hat clippers in gloved hand cell phone on hip holster. “This is the thirteenth summer for us in this garden ” Chuck says. “When we started it was almost empty ” and then Chuck disappears down a path and into the adjacent marsh brush that borders Howe Creek leaving Karen to think back to the gardens beginnings. She says one man Bill Carter a local grader took what she had envisioned and with his grader created intersected paths through layers that eventually led downhill to the lake banks. “He is just a genius with that piece of equipment ” she says.

The house a contemporary beige brick structure with sheer elevations surrounded by reflection pools and fountains was sited far enough back on the lot to add an envelope of privacy along the front faade. “I wanted the house to feel like it was part of the lot ” Karen says. “I didnt want it to look like you could have picked it out of a magazine and dropped it on the lot. Michael Moorefield designed it and he just did a beautiful job.”

The garden has grown up around the home. Working with a pickax to turn the hard red clay pan Karen hauled everything she planted from the nursery to the garden in the back of her car. “It was my size it was not big it was anything that I could handle ” she explains.

In its 13-year history however there have been several big deliveries: two live oaks a Chinese elm an array of palm trees a semi filled with boulders and two tractor trailers full of mulch.

Every year the Roots treat the clay with compost everything from the garden woodchips to grass clippings goes back into the soil. “Until I started putting compost on it I couldnt even get a shovel in ” Karen says. “Now its much much better.”

At the onset of the design process Karen addressed her gardens problems first. She found twoone was water drainage the other was the view line. “I dont like to see the entire garden. I like to kind of experience going around the corner so theres always something thats a little surprise. By putting the Savannah hollies there then I provide one: a beautiful seating area to look at the garden and two: I am also blocking the view line. I like to see through it to kind of tempt you.”

She added French drains around the periphery one that empties into a dead corner of the lake. When she began it was shallow full of mosquitoes and gnats. Opposite the spillway the prevailing winds blew the debris toward her purview. “It was nasty. So I thought well I can solve two issues. If I drop a pump in down there bring it up the hill … I can turn the water off and on. Its a dry stream bed when I need it for drainage I just turn the water off; and it made this corner of the lake live which is beneficial to everybody because it cut out all the issues you have with stagnant water.”

Karen Root who graduated from Longwood Gardens is a landscape designer. Before moving to North Carolina she and her family spent 18 years in the greater Philadelphia area where she started a business to feed her habit. “Im a plantaholic ” she admits. “I dont need clothes I dont need jewelry … but dont let me pass an arboretum.”

Karen says she loves the variety of living things. “What I had envisioned because it was only one zone difference … oh all this stuff is going to translate. No because our nights are so much warmer everything grows a little bit differently. Things I thought Id be able to bring down a lot more conifers some of the rhododendrons it just doesnt do as well here.”

Along with the warmer nights the soil temperature is also warmer. “Its a huge factor in zonal difference ” Karen says. That and the heat factor she says are now often paired with species identification. “The two of them help you decide what will and will not grow. But on the other hand every garden has a lot of micro climates.”

With seven running water features the rustle of leaves high in the tree canopy the trill warble and cackle of song and nesting birds along with the honk of Canada geese across the lake thats an understatement. With thousands of varieties of trees shrubs flowering perennials and a little bit of turf grass the Root garden is a haven for man insect bird and beast.

“I made a lot of choices because of the birds which also happens to work in my favor of course for some really nice plants. And we just got into bee keeping; we just got bees ” she says.

From the crest of the hill where Moorefield designed a breezeway that suggestively links the main house to the guest wing a cantilevered master bedroom provides a roof above an outdoor living area that looks across a cascading waterfall and infinity pool. Adjacent to the outdoor living room is a screened porch and dining room sighted for views of sunsets across the lake and the swimming pool. From these elevated vantage points and all corners of the upper garden story there are several paths to the lake. Where the grass dips toward the Savannah hollies and the reflection bench another course outlined in flagstone follows the babbling brook. An arched wooden bridge spare of handrails and elegant in its simplicity crosses the stream as it spills into the lake and links to a wooden boardwalk that follows the embankment.

Arborist Scott McGhee prunes the tree limbs Karen cannot reach. “Scott and I have a great relationship … hes a talented talented guy ” she says. “My little crape myrtles in the front yard were my size when I put them in. Now Im on a 12-foot ladder and Im trying to prune them.” And with help from Drew Thorndyke she added one last water feature several seasons ago.

Karen Root pauses to admire one of her prized blooms a whipped cream callas lily. “I finally felt like Id gotten to the point in the garden where I could start putting bulbs in … until you really pretty much get your plant material in place then you can start … what I call the layering. Everything that I grow usually has two or three layers.”

One circular bed in front of the house blooms with daffodils then amaryllis then lilies followed by summer bulbs. The flowers bloom continuously by season so there is always something coming next.

“In every composition you want to have a lot of different texturesyou want your needle texture you want your large needle texture you want the round balls you want the pyramids you want the spikesyou want to have everything contrasting ” she says. “I under plant everything with anemones muscary and crocus because one of them will be in bloom.” She is referring to the annual Cape Fear Garden Clubs Azalea Garden Tour each April. Karens garden has been showcased twice in 2005 and 2010. Hers was also a featured garden during the Cape Fear Water Garden Tour to benefit the New Hanover County Arboretum last year.

As effortlessly as the tender pink petals that flutter in the breeze falling silently to the footpath or the delicate aroma of the fringe tree that greets the nostrils long before the tree itself comes into view Karen easily recites plant names as if she were introducing guests at a party identifying each species as she meanders through her garden. When she gets stuck she conjugates her own variety: Road-aside-um Smell-em Good-em she quotes laughing.

As the rushing sound of water pours steadily over rocks and splashes into pools Karen Root pauses just a moment to reflect beyond the beauty of her own creation. “The colors on the marsh as the sun goes down are stunning just stunning.”

In the twilight as the wild birds call and respond settling down for the night so do the Roots in their living room nestled in the lush landscape.