For Venitta Reeves the trip of a lifetime began with a simple question: What do you want to do for your 50th birthday?

“I wanted to go to Alaska ” says the adventurous local with a laugh. Reeves wanted a voyage to reflect her passion for travel an opportunity to celebrate her fantastic friendships and a chance to put significant other Kevin Walker’s 2001 Harley Davidson to good use. 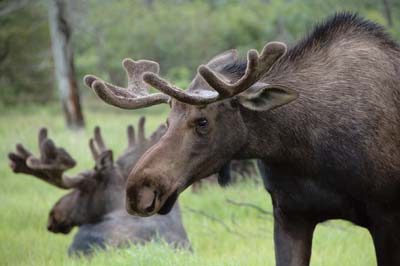 Reeves began riding motorcycles with Walker in 2001. “The first six months that he rode I wouldn’t even ride on the back of his bike ” says Reeves who now has her own Harley.

Last summer with fears and multiple expeditions well behind her Reeves Walker and eight of their closest friends shipped their bikes to Alaska and headed for Anchorage to embark upon a great adventure across our country’s 49th state. Over the course of three weeks — and nearly 5 500 miles — Reeves Walker and their friends riding two to a bike discovered the beauty of majestic Alaska.

Reeves’ first impression of the state was formed beneath the glass-domed roof of a double-decker train that took them from Anchorage to Denali National Park and Reserve — a view that confirmed every story she’d ever heard about Alaska’s natural beauty. The word Denali means “the great one” in the native Athabaskan language and refers to Mt. McKinley itself — at 20 320 feet the highest mountain in North America.

“The train ride was phenomenal ” Reeves recalls. “It had been so cloudy and overcast all summer that the people on the train were unable to see much but that day it was so clear that we could see the mountain.” 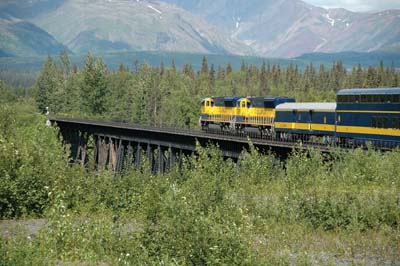 For the first few days Reeves and her crew traveled by train and explored the area through typical touristy activities. That is of course if you consider typical to be an airplane trip to a glacier at the base of Mt. McKinley.

“This was probably the scariest and most incredible thing I did on the whole trip ” Reeves says. “I really don’t like small planes. Outside of the windshield all you could see were rocks and ice because we were coming right into the base of the mountain.”

The rented plane was equipped with special skis that enabled it to land on snow and ice so the pilot was able to make a short stop in a valley that made for an excellent photo op.

He gave Reeves and her friends 15 minutes to take pictures and then rushed everyone back into the plane to avoid clouds that were coming in — cloud cover would make it dangerous to fly in and out of the area. Reeves didn’t need a second warning. She fired rapid shots with her camera and was the first one to climb back into the plane.

Her adventure was only beginning. The group took a bus from Denali National Park back to Anchorage and then started the bike trip the next morning. The first challenge was a two-mile stretch in a train tunnel from Anchorage to Valdez. In any case a two-mile Alaskan tunnel would be intimidating enough but imagine a tunnel built for a single train in which the motorcyclist has to travel in the area between the train tracks. Now imagine struggling to maintain balance in strong wind whipping through the tunnel pushing you back and forth for two miles. Oh and was that a train whistle I just heard? 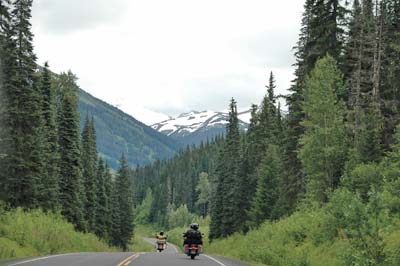 “Everybody — even the passengers on the back [of the motorcycles] were white-knuckling it and hardly breathing ” Reeves says. “Then suddenly there was the light at the end of the tunnel and we could finally breathe a sigh of relief.”

The group finally arrived in Valdez a quaint port city located in south central Alaska on the northeastern tip of the Prince William Sound known for fishing crabbing and tourism. Tom Lopez a friend from Wrightsville Beach — who spends his summers in Valdez salmon fishing — graciously set up activities for them.

“Three of the guys woke up at the crack of dawn for a fishing trip and caught a bunch of salmon and one halibut. We had all of it flash-frozen and shipped home ” Reeves says. “We still have some of it in our freezer!”

As soon as the fishermen returned everyone jumped on a boat for a tour of the Columbia Glacier in Prince William Sound one of the fastest-moving glaciers in the world. The glacier covers about 440 square miles rising 250 feet above the water and extending more than 2 000 feet below.

“It was an eight-hour tour and our captain spoke the entire time ” says Reeves. “He was so full of information about the area.”

During the tour they saw a variety of animals including humpback whales lounging sea lions puffin birds and sea otters.

Continuing through the mountainous Yukon Territory Reeves and the crew headed for Hyder Alaska. Hyder is located at the head of the Portland Canal giving it a unique location between the border of the United States and Canada.

“You actually have to go through a checkpoint to cross the border ” Reeves says. “I tried to take some pictures but the guy in the booth didn’t seem too happy about it.”

This became a popular destination for long-distance motorcycle riders in 1998 when author Ron Ayres finished his seven-day journey through 49 states there. Hyder is also the location for the annual Hyder-Seek an event that brings together motorcyclists from all over North America each Memorial Day weekend.

“It felt just like a cruise; we even had cabins to sleep in and restaurants [on board] ” Reeves says.

After the ferry ride Reeves took another ferry to Vancouver Island where they could travel southward towards Victoria. Victoria is the capital of British Columbia and a prominent must-see for tourists in the area.

While in Victoria the group was able to spend two nights at The Fairmont Empress a 477-room Victorian-style hotel that is representative of the capital’s history and beauty.

“We traveled long hard days but we stayed in the nicest hotels ” says Reeves. Unfortunately we didn’t have the proper clothing with us to attend High Tea.”

Reeves also had a chance to visit the world-renowned Butchart Gardens a spectacular showcase of flowers statues and fountains established in 1904 by Jennie Butchart who moved to Canada with her husband to utilize the limestone deposits for his cement company.

After Victoria the group split up; four members headed home but Reeves Walker and four others continued on towards Boise Idaho where they celebrated her birthday.

Ninety miles west of Salt Lake City Reeves and Walker discovered that the rear-wheel bearing on their bike was giving out and they knew that the adventure was coming to an end. Disappointed but ultimately satisfied by how many miles they covered Reeves and Walker caught a flight back to Wilmington.

“This was a birthday I will never forget ” says Reeves with a smile. “We saw so much but for me it was more about the journey than the destination.”