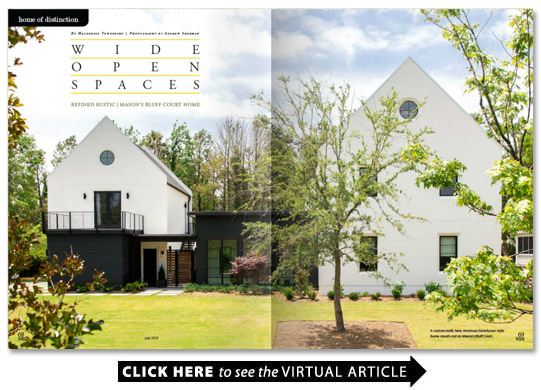 Resting on a side table in a New American Farmhouse style set in a U-shape on Mason Bluff’s Court is a sleek black bound book with white letters that read “The Home That Pinterest Built” by Diane Keaton.

An inspirational work an at-home guide for creative inspiration and also a nod to how homeowner and interior designer Christina Vega created and styled her home from the ground up.

“I took a lot of ideas from Pinterest. It’s almost a Frankenstein kind of stream of consciousness because you have all these types of furnishings and fixtures you like and you want to bring it all together. When you start putting ideas on Pinterest you start to see a style emerge out of that.”

Vega formerly had visited a friend who lived on Mason’s Bluff and a decision to move the family to Wilmington found her searching for her perfect home in the area. She and her husband bought this piece of land about six years ago decided to build.

After hiring Mack Braxton from RMB Build and Design she started cultivating and infusing the home’s plan with her distinct style — one that is rich with timeless black-and-white pieces antique rugs geometric light fixtures and natural woods and leathers.

“They were not living here at the time but would they would come down periodically to get everything finalized ” says Braxton.

Originally Vega wanted an A-frame construction before deciding on the U-shape the home became. Designing back and forth over email and phone the home design went through a few iterations before arriving at the final product.

“They wanted a detached garage with a studio above; we did a full height glass foyer or vestibule that connects the garage studio to the main living structure ” Braxton says.

The pool fills the space created by the structures.

“With each picture I saw I was like ‘OK let me tweak that.’ It was already done in my head. I had a full 3D photo in my head of what I wanted to look like ” Vega says. “Mack the builder could understand some of ideas I was talking about so it was a good collaboration.”

In the foyer blooming houseplants greet visitors as they step inside.

“I was never able to grow orchids. I would buy one and they’d die a week later but that one has been there for almost two months. I don’t have to do anything to it it just continues to grow by itself. I call it my atrium now because they just love it in there ” she says.

The floors — natural character-grade white oak — infiltrate the more modern style as you’re pulled into the wide-open kitchen and living space; it’s equally classic and modern. In the kitchen a large black marbled island contrasts the all-white cabinets seamlessly and the appliances are built into the walls for a more integrated look.

Floor-length windows on the east side of the home allow for a view of the pool and courtyard natural light and a steady breeze through the living room and for making the space look even more wide open.

“She has a very minimalist approach we capitalized on that — doing the doors black the inside of the windows black — to add some color to it with the tile and cabinet selections. Tile selections in the bathrooms was really cool ” Braxton says.”I like big open spaces; we had an open concept with a large room. We like entertaining so we can open the doors all the way and we can just have an indoor-outdoor living ” she says.

“I had a lot of fun picking out the furnishing and flooring and lighting and finishes ” says Vegas.

The furniture was carefully chosen to complement the black and white — with browns and golds They warm up the room and make it feel more cozy including use of a geometric overhead light that has been with Vega for nearly 10 years.

“Light fixtures to me are like jewelry in a house ” Vega says.

Also on the ground floor is a guest bathroom and a home office both that carry the same seamless blend of rustic yet refined. The office walls are painted black a potential risk but the warm natural toned details and fixtures bring enough light into the room to make it feel open rather than claustrophobic.

The staircase leads to a guest bathroom two guest bedrooms and an upstairs living area and each room feels free and wide. “I could have probably had another bedroom upstairs but I like rooms that are bigger. The bathrooms could be smaller but I like having more space around me so I decided to go with less rooms and bathrooms and make them a little wider ” Vega says.

“When you have a very simple color combination you can mix things up with a couple different textures. That’s what I try to do: keep the color palates simple but have a few textures ” she says.

At the rear of the house private and quiet sits the master bedroom. An all-white bed with an oversized headboard is anchored by a red-based antique geometric-patterned rug.

The master bathroom is long and narrow with a large shower and bathtub covered in statuary marble which give the room multiple textures and patterns.

“For this bathroom I went a little lighter — there’s a lot of light in here. I like nice big showers ” she said. “On a pretty day I can open up the doors and it feels like you’re taking an outdoor shower but you’re inside.”

A wrap-around porch with a hammock is just outside the window. The big doors open up and allow the breeze to flow through the house.

Parallel to the main house is the studio above the garage used to accommodate guests. A funkier take on Vega’s distinct style it features orange and yellow furniture eccentric tiles and pottery with a telescope at the window.

“Everywhere we travel we try to get something from every place. There’s some up here and on the bookshelf. We found pottery in Asheville. I love the natural and raw look ” she says.

A wide-reaching courtyard and garden join the two structures. Lounge chairs and hammocks surround a rectangular saltwater pool in the middle of the courtyard; the trees above have the feel of a mini-forest making it the perfect summer escape from the coast’s July heat.

Stylistically each corner of the home came directly out of Vega’s imagination — a three-dimensional vision she had in her head courtesy of combing ideas she likes with surfing Pinterest boards to fill in the cracks. “That’s kind of what this house is. The house that Pinterest built ” she says.