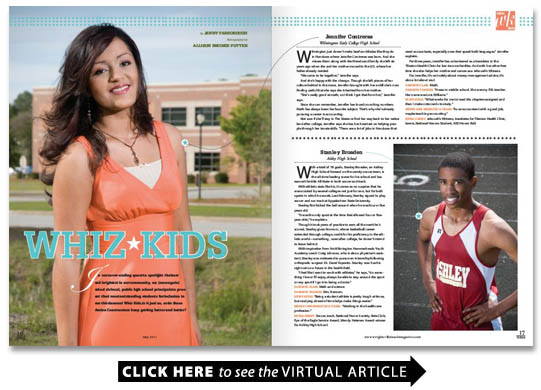 In our never-ending quest to spotlight the best and brightest in our community we (once again) asked six local public high school principals to present their most outstanding students for inclusion in our third annual Whiz Kids. Is it just us or do these Azalea Coast seniors keep getting better and better?

Wilmington just doesnt make beef enchiladas like they do in Honduras where Jennifer Contreras was born. And she misses them along with the friends and family she left six years ago when she and her mother moved to the U.S. where her father already resided.

“We came to be together ” Jennifer says.

And shes happy with the change. Though she left pieces of her culture behind in the move Jennifer brought with her a skill shes now finding useful that she says she inherited from her mother.

“Shes really good at math so I think I got that from her ” Jennifer says.

Since she can remember Jennifer has loved crunching numbers. Math has always been her favorite subject. Thats why shes already pursuing a career in accounting.

Not sure if shell stay in The States or find her way back to her native land after college Jennifer says she has her heart set on helping people through her innate skills. “There are a lot of jobs in Honduras that need accountants especially ones that speak both languages ” Jennifer explains.

For three years Jennifer has volunteered as a translator in the Tileston Health Clinic for low-income families. And with her other free time she also helps her mother and serves as a Jehovahs Witness.

For Jennifer its not solely about money-management advice its also a lot about soul.

“It was in middle school. She was my ESL teacher. Her name was Lois Williams.”

“What works for me is I read the chapters assigned and then I make note cards to study.”

“As an accountant with a good job maybe teaching accounting.”

With a total of 78 goals Stanley Broaden an Ashley High School forward on the varsity soccer team is the all-time leading scorer for his school and has earned the title All-State in both soccer and track.

With athletic stats like his it comes as no surprise that he was scouted by several colleges not just for one but for both sports in which he excels. Last February Stanley signed to play soccer and run track at Appalachian State University.

Stanley first kicked the ball around when he was four or five years old.

“It was the only sport at the time that allowed four or five-year-olds ” he explains.

Though it took years of practice to earn all the merit hes scored Stanley gives his mom whose basketball career extended through college credit for his proficiency in the athletic worldsomething even after college he doesnt intend to leave behind.

With inspiration from his Wilmington Hammerheads Youth Academy coach Craig Johnson who is also a physicians assistant Stanley was motivated to pursue an internship following orthopedic surgeon Dr. David Esposito. Stanley now has his sight set on a future in the health field.

“I feel like I want to work with athletes ” he says “do something I know Ill enjoy always be able to stay around the sport or any sport if I go into being a doctor.”

“Being a student athlete is pretty tough at times but studying ahead of time helps make things easier.”

“Working in the health care profession.”

Brian Ombonga was born in Kenya although he doesnt really remember much of his native land since he moved to Michigan at a young age.

But coming from a place halfway across the globe has lent itself to a laidback attitude and the proper zeal to help others overcome their barriers.

While residing in East Lansing Brian says he grew concerned about something he noticed.

“We had a lot of immigrants in the community there from a lot of different countries ” he explains. Not being catered to by the school system Brian along with other members of the Multicultural Club founded International Storytime a program he helped facilitate through the local library.

“One thing that was notable was the language barrier ” he says of the immigrant children. “So we got people who were fluent in different languagesSpanish or French or Arabicand just read to the children to show them the value of learning and the importance of education and hopefully set them on the right track.”

Though Brian has since moved to the Wilmington area he continues his volunteer services at the Northeast Regional Library.

As for college Brian says he already has a long list of acceptations but likes the idea of letting college take him for a ride.

“Hopefully Ill be in California next year ” Brain says speaking of Stanford University.

After that Brian isnt sure what life will throw his way. Hed rather ride on the excitement of taking what comes.

“Ive had a lot of great teachers but if I had to mention one I guess it would be Holden and Martinez.”

“Enjoying life and just grabbing it by the horns. I want to travel a lot.”

When Carolina Lara Corona was a kid she kept a box of art supplies under her bed. It was a segment on television that aired between cartoons that first struck her chords for art.

Back in Mexico where she spent her first 10 years Carolina explains that the subject of art wasnt offered in school. It wasnt until she moved to the U.S. in fifth grade that she took her first real art class.

“I came from Mexico and actually had the chance for my love for art to grow when I came to the U.S. and started taking classes ” she says.

When Carolina entered fifth grade she knew no English. But that didnt stop her from making straight As and pursuing her passion for art.

“I like art because you can go anywhereand you can never go wrong with it ” says Carolina whose stroke extends beyond her own canvas.

When she babysits her two younger nephews Carolina always gives the boys drawing assignments hoping to enrich the lives of others in the same way her life was made more colorful through art.

Upon graduation Carolina hopes to attend a college where she can study art education.

Carolina explains “I want to be able to teach in Mexico for a few years and then come back to the U.S. and teach Hispanics and Americans Chineseall of itand teach that art is really important and that there is always going to be somebody there to help you through your life.”

“Thats a hard question. I have three that I have really gotten to know my A.P. literature teacher Ms. Edmonds; Julio “JRod” Rodriguez my Latin teacherhes really smart he knows like seven languages; and Ms. Jones who is my art teacher. She is more than a teacher. She is a friend to me.”

“I review a few times for the information to stick in my head.”

ough wheeze sneeze or approach Deana Agil with the symptoms of an ailment thats bothering you and shell attempt to come up with a diagnosis.

“Since forever ” Deana says shes wanted to be a doctor. Although shes not quite sure yet what type of physician she wants to be Deana says she loves putting her beginners knowledge to practice learned from taking college classes at the University of North Carolina Wilmington through Isaac Bear Early College.

Looking up to her pediatricians growing up Deana put her trust in them to treat her ear infections and runny noses and thanks these Wilmington practitioners not only for setting her up with a clean chart but also for inspiring her to want to go on to do the same.

“I really want to help people get better and help them live a healthy lifestyle ” Deana says.

Thats why shes already accepted herself as a Tarheel next year. Deana says UNC-Chapel Hill is “one of the best schools in the state.”

And one that will allow the classes shes already aced and credits earned at UNCW to transfer giving her a head start just a few steps away from a life in scrubs.

“All of my teachers are great.”

“I read my notes everyday and before the tests I cram.”

“Working as a doctor.”

he bloodline dates back so far that the Wilmington native and Hoggard athlete Emily Tippett wasnt even aware of the fact when she signed up for ceramics class that she is related to the Owens family of Seagrove North Carolinasome of the most well-known potters in North Carolina and the nation.

“I needed a class filler ” Emily says. But it didnt take long before ceramics class molded her passion. After just one session her eyes were set on the wheel but first she had to advance to Ceramics 2. When the time came to select her next batch of classes she slated another round with clay.

Emilys first turn at the wheel came with a solid compliment from her teacher who noted her natural talent. Thats when Emily began to delve further into her familys history.

As the wheel turns the Owens family on her mothers side actually learned the craft from their forefathers as early as 1756 before settling in America from England. And Emily believes her natural ability to create may just stem from her ancestors. Her family agrees but jokes that it skipped a few generations before it found its way to Emily who intends to rekindle her family ties with her great uncles for additional hands-on practice.

“This spring break Im going to Seagrove with my Granny because were actually related to them and Im going to go turn with them and maybe see if theres an opportunity to study under them ” Emily says.

Although she is uncertain of what she wants to do after graduation Emily knows she wants to keep close ties with her family so shell probably pursue a college nearby.

“The one that Ive had all four years Ms. Townsend because shes helped me so much.”

“I do a lot of reading out loud to myself and note cards.”

“At home with kids and married. I just want to be a mom because I have such a big family; I have a passion for that.”