In our never-ending quest to spotlight the best and brightest in our community we (once again) asked our four local public high school principals to present two of their most outstanding students for inclusion in our 2nd annual Whiz Kids. Is it just us or do these Azalea Coast seniors keep getting better and better? (Hint: Its not just us!)

Hersh Desai has a good heart. For his Eagle Scout community project he built a raised stone flower bed at New Hanover High School that is accessible to special needs students. “I think I did about 200 hours of work ” says Hersh who was only required to put in 75 hours. “But I see it as a way of leaving my mark on the school.” 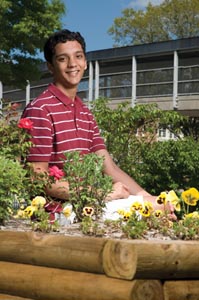 Though this Duke basketball fan says his favorite class ever was freshman year P.E. the subject that comes naturally to him is math. Hes been the president of the math team at New Hanover since his sophomore year. The team goes to competitions and tutors students who struggle with the subject. Hersh was also vice president of the student council during his senior year.

In college Hersh plans to study engineering. “Its a practical application of math ” he says. And where will he attend college? Take a deep breath his application list is long: Duke University UNC Chapel Hill Wake Forest University NC State Brown University Dartmouth Columbia University Cornell University Harvard Princeton Yale University of Pennsylvania MIT and Stanford. He is eagerly waiting to hear back from all of them before he makes his final decision.

“I have loved my high school experience ” says Hersh “but Im looking forward to the freedom and atmosphere of college and a new level of education.”

FAVORITE TEACHER: “Ive had a lot of good teachers. I cant pick just one.”

STUDY STYLE: “I usually study the night before and read over my notes.”

NEW HANOVER HIGH SCHOOL HAS PREPARED ME FOR… “my future the real world and the next level of education.”

Whenever Madison LeCroy had an opening in her high school class schedule she filled it with extra science courses. This varsity cheerleader has always been captivated by science of any kind. “I really like the labs ” says Madison who has taken AP Biology AP Chemistry AP Physics AP Environmental Science and many other non-science related AP classes. 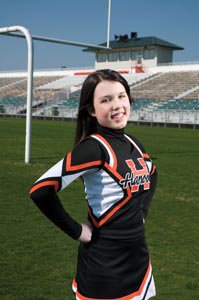 Madison is uncertain which science she would like to major in but already knows that she will attend graduate school either for medicine or law. She has been accepted to UNC Chapel Hill but is waiting to hear from Duke University Brown University and Yale. “I want to go to Brown ” says Madison.

When not in the science lab Madison is dancing. She has been taking lessons since she was a little girl. She tried out for the cheerleading squad as a freshman and has been urging on her fellow Wildcats ever since. Madison has also been a member of Key Club and Beta Club both service clubs that help out our community.

Madison has mixed feelings about leaving high school. She will miss her friends but is looking forward to meeting new people and enjoying new experiences in college.

STUDY STYLE: “I procrastinate unless its a hard test.”

NEW HANOVER HIGH SCHOOL HAS PREPARED ME FOR … “being able to balance a strong academic course load and still be able to be involved in school activities.”

Brent Campbell describes himself as a “Renaissance Man.” He plays football and runs track he sings in Voyagers he enjoys reading and he wants to be pre-med in college. 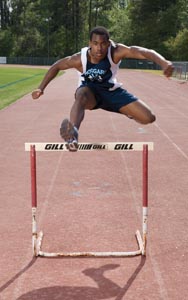 Though sports are important to Brent he hasnt let them get in the way of his studies. A member of the National Honor Society he has taken several AP classes and maintained good grades. He says that his family influenced him to do well at school good grades were just expected.

“I definitely like helping people ” says Brent about his decision to become a doctor. This desire to help comes from his father who is the pastor of New Beginning Christian Church. “Im at the church 24/7 ” laughs Brent.

Brent enjoyed meeting people in high school and growing up but says he wont miss it. Hes ready for the excitement and challenges of college.

STUDY STYLE: “I sit in my room and study.”

HOGGARD HIGH SCHOOL HAS PREPARED ME FOR … “life.”

LaKrista Williams has played the clarinet since eighth grade but its being the drum major the conductor of the marching band that she has really enjoyed especially because she was Hoggards first Africa-American drum major. “Band is my sport and my job ” laughs LaKrista. 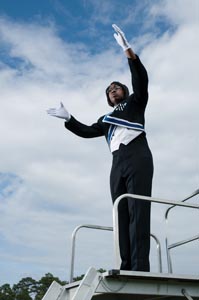 Along with music LaKrista loves math and chemistry. Its this passion that has steered her on a path to become a forensic accountant. “I love the challenges of math ” she says “and the idea of having to learn new formulas.”

She has been accepted at UNC Greensboro and Winston-Salem State but wants to go to NC State. She will study to be a certified public accountant adding the forensic (investigative) part of the equation later in graduate school.

LaKrista spent the last two summers volunteering for Wrightsville Beach Elementary summer camps where her mom is a science teacher. She has also participated in Meals on Wheels and Relay for Life.

“I will miss the people ” says LaKrista. “But Im looking forward to starting back up starting over. Its rejuvenating!”

STUDY STYLE: “Im not a big procrastinator and I work best listening to music.”

HOGGARD HIGH SCHOOL HAS PREPARED ME FOR… “life college and the real world outside of high school.”

Shannon ONeil was undecided about what she wanted to do until she attended Discover Hopkins a two-week intensive summer program at Johns Hopkins University in Baltimore Maryland. Now Shannon wants to study pre-med for her undergraduate degree with the intention of becoming a doctor. Taking AP Biology this year has fueled this desire. “I find it all really fascinating ” says Shannon. 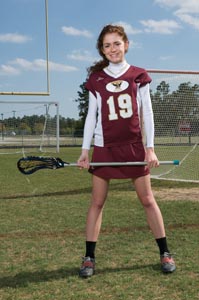 She has been accepted at NC State and UNC Chapel Hill but wont make a decision until she hears back from Wake Forest University Duke University Johns Hopkins and University of Pennsylvania.

Shannon has been on the Ashley lacrosse team since ninth grade and was co-captain this past year. She also plays lacrosse for two club teams Carolina Fever and Coastal Carolina Cudas (short for Barracudas).

Though her instrument of choice is the flute Shannon was the drum major for the marching band her senior year.

Shannon is an active member of Little Chapel on the Boardwalk at Wrightsville Beach. “When life is crazy faith is something solid to hold on to ” she says.

STUDY STYLE: “I procrastinate and then cram.”

AHSLEY HIGH SCHOOL HAS PREPARED ME FOR … “whatevers coming next!”

In an attempt to make the Guinness Book of World Records last November Jackson Morton and his friend Brian McSteen made history. They started a game of tennis at 6 a.m. and did not finish until 6 p.m. the next day. Thats right they played for an aching 36 hours three minutes and 11 seconds straight! “Planning it was harder than playing ” laughs Jackson (Guinness is still reviewing the results). 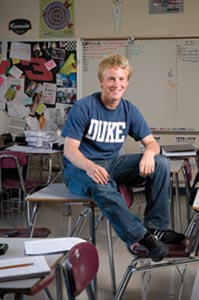 When not playing tennis Jackson enjoys math. “I like logical thinking ” says Jackson who credits his interest to teacher Mr. Adams. “Hes an amazing teacher and hes done a lot for the Ashley math department.”

Jackson is keeping his options open in college but is leaning toward doing something in engineering. He has been accepted at NC State and UNC Chapel Hill but wants to go to Princeton. “Its smaller than the other schools has good academics and is really well-known.” Jackson also applied to Harvard Yale Brown University of Pennsylvania Dartmouth Stanford and Duke University.

“I can see myself staying in school for a long time ” says Jackson who already plans on attending graduate school though the subject of study is unknown. He says he wont miss high school but isnt sure whats waiting for him in college.

STUDY STYLE: “I procrastinate a lot.”

ASHLEY HIGH SCHOOL HAS PREPARED ME FOR … “college.”

Dalton McLeans lifelong love of animals began on the Illinois farm where he grew up. Next fall Dalton will attend Cornell University in Ithaca New York the only school he applied to. The reason why will come as no surprise: “Theyre the best for animal science. Once I got accepted there was no point in applying anywhere else ” says Dalton who plans on becoming a veterinarian. 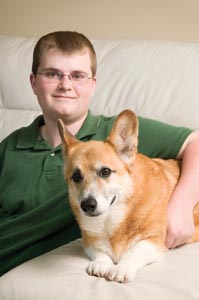 For the past three summers Dalton volunteered with the Wrightsville Beach Sea Turtle Project. He has helped walk the beaches in the early morning hours to protect nests from unwary beach-goers. The payoff for those early mornings: watching baby sea turtles make their way to the ocean.

While taking AP Chemistry Dalton did a lab that involved making soap. He now runs a soap-making business Low Country Lather and his products can be purchased at Blue Moon Gift Shops. Proceeds from the soap go to the Sea Turtle Project.

Much like the baby sea turtles hes helped Dalton is ready to leave the nest and swim on his own but says that he will miss his friends and his 14-year-old Welsh Corgi Bogie.

STUDY STYLE: “I dont really study though Ive had to this semester.”

LANEY HIGH SCHOOL HAS PREPARED ME FOR … “life in college.”

Lauren Gaillard plays the French horn not only for herself but for her father Levy Gaillard Laney High Schools first band director who passed away when Lauren was 12. His passion was music and he passed that passion to his daughter. Last year Lauren ranked fifth in the state on the French horn. She will compete again this year and hopes to be number one. 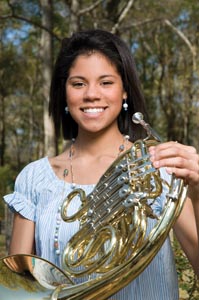 Though music is and will always be an important part of Laurens life what she wants to major in at college is biomedical engineering. “I want to be a doctor and play in a symphony thats performing music by John Williams ” laughs Lauren.

She has been accepted to UNC Chapel Hill and NC State though deciding between them has proven to be difficult. After college she wants to go to medical school and become a surgeon.

Lauren is an active member of Northside Baptist Church and hopes to do missionary work in Haiti this summer.

She is very excited to attend college but says “Im going to miss the freedom of not having to grow up. Seventeen is the perfect age.”

STUDY STYLE: “When Im in the mood. Rainy days are good for studying.”

LANEY HIGH SCHOOL HAS PREPARED ME FOR … “life.”