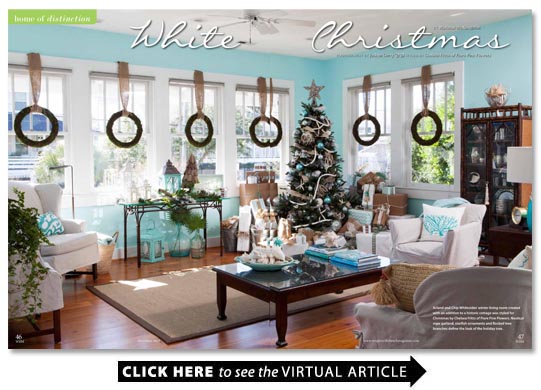 We restored an 86-year-old beach cottage. Totally brought it up to date and added an addition. Our architect was Cothran Harris and our builder was Dennis True. Thats it.

There were three sets of china waiting for ArlandWhitesides when she and her husband Chip took possession of a relic beach cottage on West Oxford Street in the fall of 1990.

Why she had three sets of china I dont know says ArlandWhitesides who ditched her fine china and sterling when she and her husband left Wilmington for the beach.

In fact the only silver to be found at the Whitesides home is locked inside a trophy case filled with engraved loving cups Jefferson cups tankards tumblers goblets and coasters won during sailing regattas. For the Whitesideses like the early Wilmingtonians who colonized Wrightsville in the mid-1800s this is a family of avid sailors all long-time members of the Carolina Yacht Club the oldest active yacht club in America established in 1853.

The Whitesideses purchased their Wrightsville Beach cottage about a week after the North Carolina Holiday Flotilla. Five years later Arland says The more time we spent out here the more we wanted to be here.

Seventeen years ago circa 1996 they hired fellow sailor and architect Cothran Harris to design an addition for the house and Dennis True of True Builders to construct it.

A significant amount of shoring up and stabilizing had to be done to the original cottage True says. The goal of the team was to create additional modern usable space that looked like it had been there all along.

The original house was scarcely 1 500-1 600 square-feet had no real kitchen and no insulation Harris recalls.

One thing they did have which is rare on Wrightsville Beach they had land Harris says. His first comment he recalls Ifyoure going to live here year-round the first thing you need is a master bedroom suite with a sitting room.

By treating the entire original cottage as secondary bedroom and bathroom space and creating a compatible addition Harris balanced the aesthetic of a restorationist with that of a renovationist. His design configured around an H or barbell floorplan allows a separation of the master suite from the public spaces.

We wanted this to have an old cottage feel but we wanted to have it reimagined Harris says. We wanted to immerse ourselves in the details in the timeframe of the original cottage. � As if the Whitesides had moved into the cottage and discovered blueprints and said �Wow they had plans for an additional bedroom lets build it.

From the West Oxford Street elevation the addition appears as if it was designed by the same person and built during the same timeframe as the original cottage.

The exterior juniper shakes were sourced nearby probably from the same forests as the originals. The simple original finishes of the cottage such as interior trim details heart pine wide plank flooring beaded trim were easy to source and duplicate.

Some windows were also removed and those frames are now covered with heavy louvered panels. Combined with Bahama shutters and hanging pots of bougainvillea which winter in the garage the Whitesideses have cultivated an eclectic look inspired by a love affair with the Caribbean.

Today the Van Leuven-Whitesides Cottage resembles the marriage of two vintage shingled cottages connected by porches that offer secluded outdoor retreats for every season. If its too hot in the summer ArlandWhitesides pulls the Sunbrella drapes across the front southern elevation. When the sun finds her she moves to the east porch. If its too windy she retreats to the north porch. Tucked between the original cottage and the new addition the north porch is buffered on both sides by exterior walls. In winter the suns low arc finds shelter tucked under the covered entry porch. Despite all of these cozy outdoor spaces shaded by palm fronds if its complete anonymity she seeks she resorts to the Charleston-esque side garden where she is especially proud to note there is not a single blade of grass on the property that needs mowing.

That is why we left town to get away from all that formal mess Arland says.

Instead the house exudes all of the charm found in its exposed porch ceiling that refuses to take a coat of paint left to peel with the elements; the appeal of horizontal laid beaded board paneling in its original living room; and soft pine floors throughout.

The original cottage is typical of others built in the early-20th century. The elevated structure supported a relatively large living and dining area rear kitchen and four bedrooms arranged along the west elevation above a two-car garage and servants quarters.

One of those bedrooms was eliminated to make space for an office that also functions as a transition area between old and new and the kitchen was enlarged by taking in a back porch that ran the length of the north elevation. But these are architectural details that support the lifestyle the Whitesideses chose for their children: a daughter and two sons.

At ages nine and seven when they moved to the beach their boys Paul and Benton were intrepid marine biologists. Hauling out an old bathtub from the ground level apartment and filling it with brackish water they set up an ad hoc laboratory. With net and bucket they harvested and observed whatever they fetched from nearby Banks Channel or farther offshore Masonboro Island. Among them was a wounded diamondback terrapin another was a Portuguese man-of-war jellyfish. Arland saw to it the specimens were always returned to their natural habitat.

During the sailing season the Whitesideses then and now entertain housefuls of weekend sailors sans souci  or without care  for there is no formal upholstered furniture in the summer living room. Rather it is furnished with a matched set of pretzel rattan settees and armchairs a real find plundered from a consignment emporium on Wilmingtons Market Street.

The winter living room is furnished with Arlands mothers antique wing chairs and settees covered with hand-sewn cotton drop cloths inspired by Martha Stewarts shabby chic collection made to withstand the onslaught of wet dogs bathing suits and sunscreened skin. Family style meals  during which Arland says all of the food is piled in the middle of the table  are served around a distressed oval table on Vietri pottery platters in the eat-in kitchen.

Theres too much fun to be had here instead of slaving over a house Arland says. When we bought it � every pizza delivery boy said that he had lived in this house when it was a rental. It is a pure old beach cottage which most people never get to visit anymore.

With traditional holidays observed from Thanksgiving to the New Year Arland admits that like living on board a boat her house has too little stowage or in this case her cottage has too little storage to do too much decorating at Christmastime.

We usually put up a little strand of blue lights on the porch she says. The illuminated pink flamingo burnt out last year and she does not yet know what will replace it.

Fiore Fine Flowers designer Chelsea Fritts shared some ideas for how ArlandWhitesides might decorate this year using what she already has on hand. Entwining the nuance of the old beach cottage with the familys love of sailing and an affinity for artwork and d�cor inspired by the Caribbean Chelsea styled the cottage with fresh florals live greens from Zone 8 shell and seaglass trees from Airlie Moon and whimsical accessories from Re-Eco.

The circa 1925 Van Leuven-Whitesides Cottage designated by the Wrightsville Beach Historic Landmark Commission in 2002 was the subject of research conducted by architectural historian Beth Keane. The research is part of the commissions application process and the documents are public record.

Keanes research reveals that Eleanor Emerson Van Leuven purchased the property at 14 West Oxford Street on September 28 1929. At the time of the purchase the property was restricted for residential purposes only. A vacant lot to the west was acquired by the Van Leuvens in 1935.

To date the Van Leuvens owned the property the longest 31 years and during that time provided for service staff with ground-level quarters for a cook who doubled as a laundress and a butler who was also a gardener. This ground floor area was flooded by Hurricane Fran in 1996 three weeks after the Whitesides moved permanently to West Oxford Street. The garage walls have the watermarks to prove the flood waters reached between three and four feet.

During the renovation that area had to be gutted to meet town code. It now provides storage behind garage doors that duplicate the design of garage doors that ArlandWhitesides discovered on another local historic landmark.

Chelsea Fritts of Fiore Fine Flowers is a wedding floral design specialist with more than eight years of experience in California Ohio and Wilmington North Carolina. She also holds a degree in architecture and has been a display coordinator for Anthropologie.