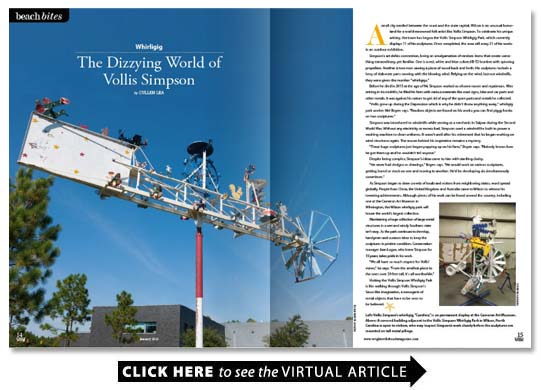 A small city nestled between the coast and the state capital Wilson is an unusual homeland for a world-renowned folk artist like Vollis Simpson. To celebrate his unique artistry the town has begun the Vollis Simpson Whirligig Park which currently displays 11 of his sculptures. Once completed the area will array 31 of his works in an outdoor exhibition.

Simpsons art defies convention being an amalgamation of random items that create something extraordinary yet familiar. One is a red white and blue colored B-52 bomber with spinning propellers. Another is two men sawing a piece of wood back and forth. His sculptures include a bevy of elaborate parts moving with the blowing wind. Relying on the wind but not windmills they were given the moniker whirligigs.

Before he died in 2013 at the age of 94 Simpson worked as a home mover and repairman. After retiring in his mid-60s he filled his farm with various materials like road signs bike and car parts and other metals. It was against his nature to get rid of any of the spare parts and metals he collected.

Vollis grew up during the Depression which is why he didnt throw anything away whirligig park worker Mel Boyen says. Random objects are found on his works; you can find piggy banks on two sculptures.

Simpson was introduced to windmills while serving as a mechanic in Saipan during the Second World War. Without any electricity or excess fuel Simpson used a windmill he built to power a washing machine to clean uniforms. It wasnt until after his retirement that he began working on wind structures again. The reason behind his inspiration remains a mystery.

These huge sculptures just began popping up on his farm Boyen says. Nobody knows how he got them up and he wouldnt tell anyone.

Despite being complex Simpsons ideas came to him with startling clarity.

He never had designs or drawings Boyen says. He would work on various sculptures getting bored or stuck on one and moving to another. Hed be developing six simultaneously sometimes.

As Simpson began to draw crowds of locals and visitors from neighboring states word spread globally. People from China the United Kingdom and Australia came to Wilson to witness his towering achievements. Although pieces of his work can be found around the country including one at the Cameron Art Museum in Wilmington the Wilson whirligig park will house the worlds largest collection.

Maintaining a huge collection of large metal structures in a wet and windy Southern state isnt easy. As the park continues to develop handymen and curators labor to keep the sculptures in pristine condition. Conservation manager Juan Logan who knew Simpson for 15 years takes pride in his work.

We all have so much respect for Vollis vision he says. From the smallest piece to the ones over 20 feet tall its all worthwhile.

Visiting the Vollis Simpson Whirligig Park is like walking through Vollis Simpson s Seuss-like imagination a menagerie of metal objects that have to be seen to be believed.