Where the River Runs Deep

A day in the life of a Cape Fear River pilot 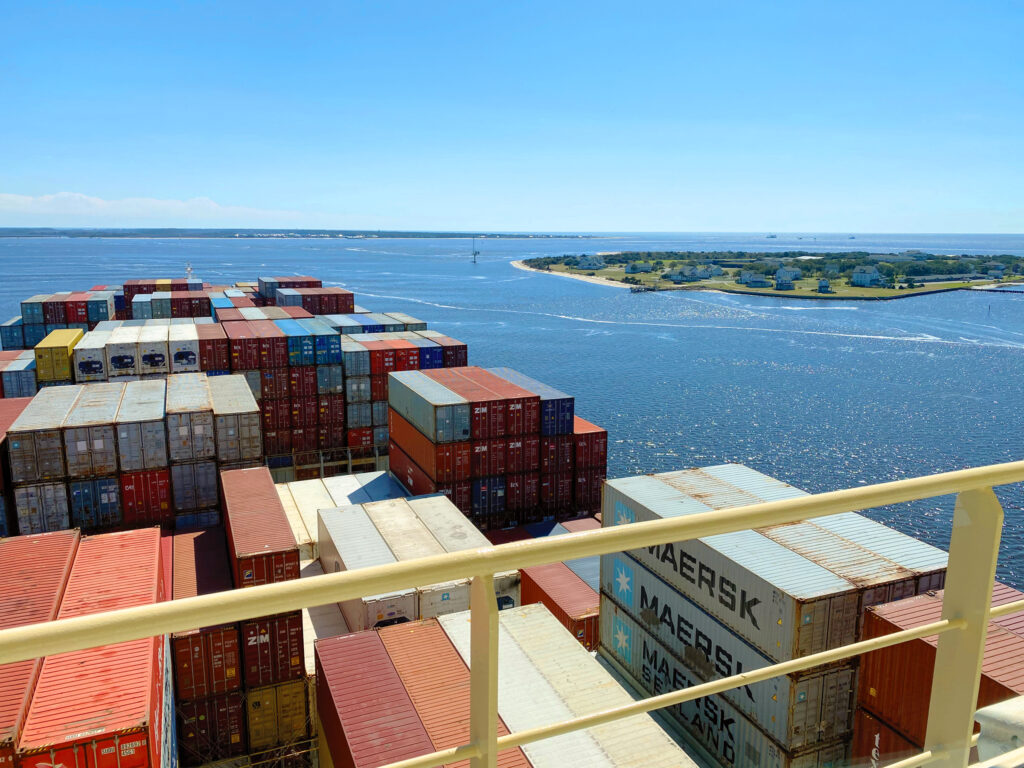 The boat Pilot II is running fast out to sea, riding rough through a stiff onshore wind. Her 500-horsepower, twin diesel engines purr as she passes the distant Bald Head Island Lighthouse.

Off her port bow, Frying Pan Shoals sparkle and flash in the morning light, their raw beauty at once spellbinding and ominous. Ragged waves burst in clouds of spray shooting high above the ocean surface. Savage currents tear through the shoals with a sound like ripping cloth. Off the starboard bow, a boiling cluster of bars and sloughs known as Jaybird Shoals rises menacingly from the depths.

It’s no wonder that a place so beautiful and so terrible has a name that has haunted ships and sailors for four centuries: the Graveyard of the Atlantic. In the Cape Fear area alone, there are 411 documented shipwrecks.

Running so close to the shoals in this sea of dread, where the bordering channel is about 50 feet deep, might result in terror for some, panic for others. But not for Cape Fear River pilot Bill Heu onboard the Pilot II.

This is just his morning commute.

Regardless of the risk, vessels must navigate between the open ocean and the Port of Wilmington. Expert pilots like Heu take to the sea almost daily to board these ships and steer them to safety. In 2020, Cape Fear River pilots risked disaster in the form of weather, wind, tide and current to make 1,330 trips inbound and outbound.

This morning, Heu is meeting the Santa Linea, a Hamburg-registered container ship 10 miles off the coast. Her decks are stacked with thousands of containers and millions of dollars in goods destined for retailers and manufacturers.

Ship captains like the master of the Santa Linea aren’t authorized to pilot ships in U.S. harbors because they are unfamiliar with channels that can change in a matter of days, making even the most recent charts obsolete. Local knowledge always prevails, so the responsibility of river navigation goes to the pilots who are charged with the heavy responsibility of bringing the vessel, cargo and crew safely to their destination and to where the harbor tugs take over.

Pilot II left her Southport berth at dawn with captain Bryan Wessell at the helm. Wessell will deliver Heu to the Santa Linea. Once onboard, Heu will pilot the Santa Linea from the sea buoy through the famous tidal strait bracketed by Bald Head Island and Fort Caswell and then some 20 miles up a winding and perilous course to the docks.

Heu, like his fellow Cape Fear River pilots, is certified to guide ships between the sea buoy and Wilmington. He has to know every shoal, bend and channel of the river and how each may change depending on wind, current and tide.

The union of the Cape Fear and the Atlantic forms the principal shipping channel to Wilmington — historically one of the most important harbors in the world. It is also one of the most treacherous harbor entrances on the East Coast. Powerful river currents and the mighty Atlantic Ocean come together to form a gumbo of sloughs, bars and shoals.

Beginning in the colonial period, the Cape Fear River was an essential element in developing early shipping commerce. Due to its location on the river, Wilmington became the center of trade, politics and culture for the region. Shipping was active with a constant flow of imported goods and exported naval stores — turpentine, rosin, tar and pitch.

Maritime business was good and commerce brisk but getting a ship from the sea past the constantly shifting entrance bar and into the river was just the beginning of the journey. Since 1784, safe passage from Southport to Wilmington through the vast network of inlets, sounds and shoals has required the expertise of river pilots.

Pilots guide ships at every major harbor around the world, and have for centuries, but due to the unusual and treacherous length from the ocean to the various docks along the river and at Wilmington, confidence, knowledge and expertise are all special prerequisites of every Cape Fear River pilot. They know it takes time to turn a ship and miles to stop it so they must anticipate and avoid peril that could come at any moment from shoals, wind, oncoming vessels or a maelstrom of currents pulling in opposing directions.

North Carolina requires all U.S. and foreign registered vessels over 60 tons to utilize a state-licensed pilot both incoming and outgoing into the Cape Fear River and its docks. Pilots are required to hold a U.S. Coast Guard First Class License of unlimited tonnage.

Cape Fear pilots come from a variety of nautical backgrounds that reflect the diversity of the maritime industry. Some might have started as deckhands, others as U.S. Navy veterans or tugboat captains. All North Carolina licensed pilots are highly trained with substantial experience, and all must go through an extensive apprenticeship program.

As Pilot II pounds her way through heavy seas, the Santa Linea rises like an apparition from the mist, ghost-like on the horizon seven miles distant. It’s an eerie sight. Towering as high as a 10-story building above the ocean, she’s 1,100 feet long, 150 feet wide, and can hold approximately  20,000 containers.

The Pilot II, minuscule compared to the massive container ship, carefully maneuvers alongside. Now both vessels move in tandem, underway at 11 knots. An orange and white ladder made of slick nylon rope and plastic steps unfurls from a tiny hatch amidships in the Santa Linea’s starboard side. Sandwiched between the two vessels, the ladder swings at random with each ocean swell. The two vessels heave together, side by side, Pilot II pitching and falling alongside the monster ship.

Heu has only one way to board, and that is to climb the pilot ladder. It’s a feat that requires agility, strength, and a keen sense of timing. A false move here will be disastrous. He must time the rising swell so that Pilot II is positioned at the exact same level as the ladder before he makes his move.

Pilot II might be in position for only a second, and in that second Heu must grasp the ladder, often at a leap, find his footing, and then climb the rungs some 30 feet up and through the tiny hatch into the ship’s belly and safety.

The wind has increased now and begins to whine through the Santa Linea’s superstructure as Heu, intensely vigilant and focused, prepares to board. From the hatch high above, the faces of two crewmembers peer anxiously down at the unnerving scene.

Heu times the rise perfectly, but almost at the second he grasps the ladder Pilot II falls 10 feet as the swell recedes, leaving the pilot swaying above a cold and violent sea. A rough rope ladder is all there is between Heu and eternity. This is no place for the faint of heart.

Nimble and spider-like, Heu cautiously climbs aloft rung by rung and disappears finally into the ship and safety. The hatch closes and disappears like it was never there. Heu is escorted through a winding passageway to the ship’s bridge and navigation center where he is greeted by a happy master and chief mate. All is well as Heu takes command and heads the Santa Linea toward Southport and into the mouth of the river.

One might say it’s just another day at the office for a Cape Fear River pilot. For most mortals, however, the balance sheet of this office could only be measured in increments of sheer terror.

Today the Wilmington Cape Fear Pilot’s Association, which is governed by the Cape Fear River Navigation and Pilotage Commission originally set up by the state legislature in 1784, has seven pilots and is housed on the beautiful Southport waterfront in a calm harbor safe from the ocean’s roar. From there, they carry on the business of piloting coastal and sea-going vessels, continuing to play a critical role as keepers of shipping on the ancient Cape Fear and promoting and assisting in the commerce and prosperity of our port.