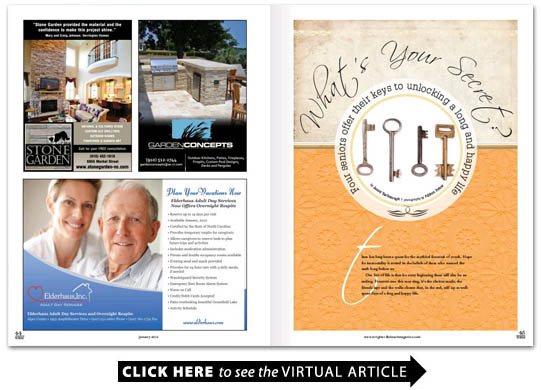 There has long been a quest for the mythical fountain of youth. Hope for immortality is rooted in the beliefs of those who roamed the earth long before us.

One fact of life is that for every beginning there will also be an ending. However true this may ring its the choices made the friends kept and the walks chosen that in the end add up to well-spent days of a long and happy life.

Around town not many folks recognize the name H.D. Russell. Snake however they do know.

John Wood who once worked alongside Snake at the paper mill explained as he was told by Snakes schoolmates that he was always “tall and skinny.”

So slender that in the dead of winter when there was nothing else better to do Snake was the only one who could crawl through the tiny crack of the school gymnasium window. When he slithered in Snake would unlock the door so that he and all of the neighboring kids could play basketball.

Still lean at the age of 67 Snakes physique matches the attributes of the nickname he earned so long ago. Its a name Snake says hes trying to shed but thats tough to do in a town where even his pastor calls him Brother Snake.

Today the former welder and millwright who by their chuckles seem to play as hard as they work carry out a tradition also begun by Snake long before it was fashionable.

“I was walking around the Loop before the concrete was there before the trees were planted ” Snake says speaking of what gets his morning going better than a cup of Joe.

Back in the 70s Snake a Seagater at the time said he noticed he was gaining a little weight so he started running.

“I ran every day for one year ” he says “never missed a day rain sleet snow whatever it did it didnt matter.”

But after that year realizing how lucky he was not to have knee problems Snake decided to walk. After Wood retired he joined him and every day of the year to this day no matter the conditions the pair one in a red truck one in a white one arrive at 5 a.m. at the Wrightsville Beach Post Office to walk around the John Nesbitt Loop plus an additional route they call The Boardwalk.

“That gives us three miles and two tenths ” Snake says.

Wood explains “We always had to get up early to go to work. Its 25 miles out there to International Paper. I just never got out of the habit of getting up early.”

Both have had their fair share of heart troubles in the past but their doctors advise them to keep walking. Snakes doctor devised a rehab plan for him on the Loop.

The walking buddies know just about everyone they encounter during their early-morning routine even the dogs. They keep treats in their pockets for their furry friends.

“When all the dogs are out there ” Wood says “we give about five dogs treats.”

“When its 15 18 degrees we dont hardly see anybody ” Snake says. “See we worked outside. We know how to dress.”

And Snake and Wood know how to work.

“I started sledding tobacco when I was five years old ” Snake explains. “He did too.”

Whether theyre walking fishing trimming hedges or setting tables for a church function these men know how to get the job done.

“We walk 12 000 miles a year. We walk 100 miles a month. And we go through about four pair a shoes a year ” Snake says after slipping off his right shoe. On its sole is a hole worn almost all the way through.

Only a good wifethat is to say one with skills in the kitchen lady-like sophistication for entertaining and motherly instincts for rearing her youngsters could stomach firing her brother Jacks BB gun at an albino mule that threatened to eat her newly sewn rye grass seed. She has swung a bush axe at a snake sat alone in the woods in a bear stand witnessed a hog killin and allowed a wild snapping turtle the size of a dinner plate named Gertrude by her son to accompany him to Camp Seagull in the back seat of the car. All the while this country doctors wife attended medical seminars with her husband and consoled patients whose bizarre and tragic stories could fill volumes.

Altogether Martha Jeter claims 57 years of medical expertise passed down to her firsthand from two fine North Carolina physicians she found as her companions.

As a young lady Jeter vowed to love and to cherish Dr. Vernon Jeter who was certified in family medicine. He became the father of her three children but just 15 years into the marriage he succumbed to a heart attack. With children still to rear Jeter taught English composition and American literature keeping food on the table and her mind satisfied.

Proper ladies rarely ever give up their age and to Jeter age is nothing but a number.

By the stories Jeter writesanother of her many talentsit is clear her life thus far has been as vibrant as the summer sun she sees past the handrail of the wraparound porch of her familys historic Wrightsville Beach cottage. Ensconced in her rocking chair her naturally curly red hair frames the face of a genteel lady with an easy smile and a cultured mind.

“Plan something pleasant for the week ahead so that you have something to look forward to. And most importantly of all is to keep your cerebral activities going with reading or if youve been given a talent to use that talentand devote a part of every day to do something for somebody else.”

Jeter reads one to two novels a week. She makes pillows with carefully selected fabrics for friends and has a needlepoint project going at all times. She believes in exercise and eating a low fat dietsomething shes practiced her entire life.

“I do think that probably attributes to good health as much as anything ” Jeter says. “A friend of mine has a saying and shes reminded me for years that Age is an attitude. We cant really avoid stress ” Jeter explains. “Its what other people do that affects us but we can try to not overload ourselves with our own stress that we create.”

Jeter believes it is the mind that facilitates the apparatus to the heart.

“You just have to put one foot forward every day ” she says. “You have to keep on keeping on. Thats the secret I believe.”

Preston Graves has never been rich. But as he will tell you his life has been all but poor.

After 30 years in the army during which he and his family were stationed in Germany Belgium Italy and Libya he retired as a colonel after serving in World War II and Vietnam to become a math teacher at Woodberry Forest School in Virginia where he taught for two decades.

This month Poppy the name given to him by his biological grandchildren and all of his neighborhood children will turn 91.

His long life may be credited to his nature. Poppy is a simple man.

Poppy was born on a cold winters day in Marshall Virginia a town so small he claims youd never find it on a map.

“Weve been lucky ” he says of the years he shared with his wife Alma.

“The main reason I have lived so long ” he says “is because my wife gave me six children.”

Poppy is not afraid to give Alma all of the credit for rearing them. When he wasnt traveling with the military he admits he was playing golf. Alma raised them all herself.

“She was the rock in this family ” Poppy says.

Today his family tree extends beyond its roots. Mention any neighbor living to his left right or across the street and he will state “Theyre a part of the family.”

That goes for the dogs and cats too. Madeline and David Flaglers dog Kukui and cat Charlie visit Poppy daily while their masters are at work.

When collecting vegetables from his garden learning to drive on his golf cart or just checking in extracting the miniature Mr. Goodbars (all of the neighbors favorites) from the candy jar Poppy teaches each person he meets about the value of the people in his life.

“One of the things about living this long ” he says “I think primarily youve got to hand it to supporting family and neighbors.”

With the help of his doctors and God family and neighbors by his side Poppy explains hes overcome cancer twice.

“Youve got to give credit to longevity to really good medical care ” he says.

He also gives credit to his ancestors before him for living long lives.

But whether its in his genes or in his mind Poppy says “I think really seriously the reason we have been happy with our lives is that we were happy with what weve got what we had. We didnt need more. If we had more we would have given it away. Alma and I said You know if we were billionaires we wouldnt live any better than we do right now. We wouldnt want to live any better.”

For Poppy just enough is good enough. He wouldnt have it any other way.

“You dont worry about things. You worry about people ” Poppy says. “Not worrying about dying or living either that really helps.”