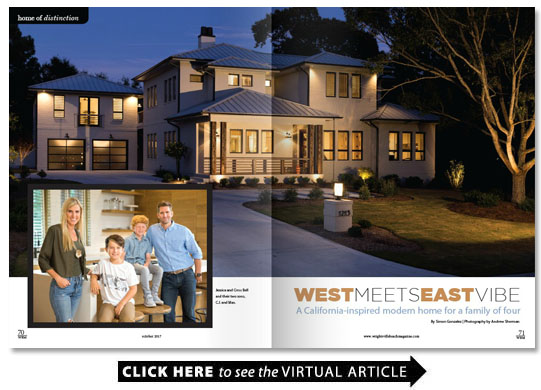 Cress and Jessica Bell can’t quite remember the number of houses they have lived in during their 11 years of marriage. Somewhere between six and 10 Cress says. Jessica says it’s closer to six. Either way a lot.

Cress is a builder. He began in California moved to Wilmington to open an East Coast branch of Raleigh-based JordanBuiltHomes and then started his own company Bell Custom Homes.

When you’re a custom builder you tend to live in a house you’ve built for a couple years then sell and move on. But the Bells intend to stay in their new Landfall home for a while. “We designed it for the kids to grow up in ” Cress says. “The lot the family and friends we have in the neighborhood it just all adds up that this is going to be the one.”

His parents bought a lot behind the house and will be neighbors when Cress completes their home.

“We decided that this lot and this house his parents being close this is it ” Jessica says. “We want to make it home.”

Cress set out to design a home that was “cool or groovy.” That meant a West-meets-East vibe with California-inspired modern clean details mixed with warm elements borrowed from coastal Carolina particularly in the use of wood throughout.

The blend is seen in the sunken living area Cress’ favorite room and the one he calls “the heart and soul of the house.” A stained concrete floor adds character and defines the space. Oak columns and baseboards provide warmth. “It’s inspired by industrial modern in here but in a soft palette instead of a museum kind of sterile atmosphere ” Cress says. “It’s the livability of a modern design.”

Jessica contributed her ideas to the d�cor including the use of gray and white furnishings. “I’m about keeping it clean and simple ” she says. “It’s about figuring out the right balance where less is more. You don’t want a ton of stuff everywhere. That wouldn’t complement the home.”

Vintage concrete molds from India decorate the wall above the couch. “They’d fill this mold with concrete and when it hardened it would be a wall panel for decorative ventilation ” Cress says. “I love vintage stuff and being in construction I could relate it to our industry.”

The double-sided fireplace includes LED lights that can produce visual effects like fire on ice and fire on lava.

The open-concept plan on the ground floor includes a seamless transition between the kitchen and dining area. The gray/white color palette and oak window inlays continue in this space.

The floating staircase is one of the anchors of the house. Metal support beams and cables add to the modern look while oak treads and mahogany railings keep it from being austere. All of the inside doors and cabinets are also oak to add warmth. “Everything in here is oak because I like that golden color ” Cress says. Split ovens in the kitchen island provide symmetry. The bulkhead over the cooktop includes recessed LED lighting rather than traditional pendant lights. “We try to do old things in new ways ” Cress says. The backsplash wall behind the sink’s counter is painted brick that extends to the ceiling.

Bell designed the home with his and hers offices. Jessica says her office which is off the entryway will allow her to take on a bigger role with Bell Custom Homes. “It’s just a really neat space. To be a mom and to have two little kids it’s nice to have a space that you feel is your own ” she says. “I love the window. That’s probably one of my favorite things in the whole house. Cress made that to be like an atrium window because of the backdrop behind it.” The chair to the right of the desk is Indonesian teak. “We got it at a really cool consignment shop in San Clemente ” she says. “It’s been a piece in every house we’ve had.”

Cress describes his office in a carriage house above the garage as a retro mid-century modern space. It includes a work area and a seating area where he can meet with clients. A pullout couch kitchenette closet and drip-drain shower allow it to double as a guest area. It’s accessible via an upstairs catwalk from the home and by outside stairs. “I designed it so if I have clients they can come up here without going through the house ” he says.

The design theme and color palette from the living/dining/kitchen area continue in the master bedroom. The master suite includes a bathroom that creates a high-end hotel feel with a freestanding tub zero-entry shower with two shower heads a quartz countertop and a double concrete sink. The bath is accessible through a sliding barn door made of oak with copper inlays.

Brothers who are best friends C.J. and Max are often outside playing in the spacious yard. When they’re inside the upstairs is their domain. C.J. who is about to turn 10 keeps a bearded dragon in his room. “We asked our kids ‘What theme do you want for your room?'” Jessica says. “C.J.’s was museum/creatures. He loves it because he says it’s like a museum. He has a reading room in his closet with a little chair. He goes in there and it’s his space.”

Max who recently turned 7 sleeps in the bottom bunk in his room. C.J. often sleeps up top.

The boys have their own living/recreation room. Design touches carried over from the family room downstairs include a fireplace with LED lighting. They also enjoy spending time with their parents in the house they will call home for some time.

“Sometimes you build and you think about selling which is a smart thing to do ” Jessica says. “But this house we just really focused on the things we’ve always wanted to do. We want to be here for a while.”