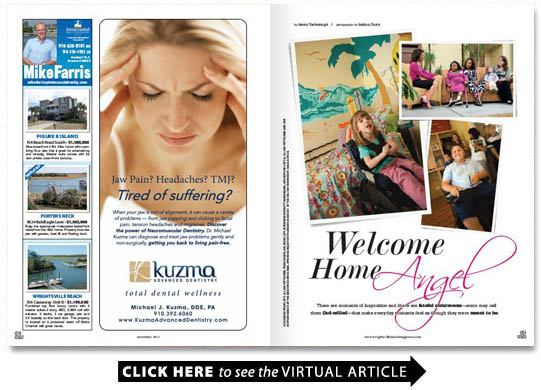 There are moments of inspiration and there are fateful occurrencessome may call them God-willedthat make everyday moments feel as though they were meant to be.

John Kaiser wasnt waiting for a sign. He wasnt waiting for an angel to cast him a line a role to fill. He was simply watching TV in his Pine Valley home when synapses fired and an idea based off of someone elses idea was conceived.

A 16-year-old boy who lived down the street from Kaiser was in a serious car accident which left the boy with traumatic brain injury.

But the boy lived. And there was rehab to endure doctors to see and lives to rework.

In the same neighborhood Kaiser moves his thoughts to another child; this one is a 12-year-old girl who was taken to the doctor by her parents who suspected she had the flu. Moments later the little girl was airlifted to Chapel Hill.

She had a disease with a name Kaiser says “was about this long ” as he stretches his arms out implying its dire nature.

“She almost died five or six times ” he adds.

“But ” Kaiser explains “I saw what happened when she came home again.”

With dysfunctional kidneys the girl would need dialysis but no one in town at the time would perform pediatric dialysis so the mother and father learned how. The parents also reconstructed their hometheir little girls room and her bathroomto accommodate her new needs.

After the initial unexpected hospital visits there were banners welcoming the children home. There were friends and family at the front door showing their support.

“But over a period of time ” Kaiser says “the friends go away. They just go about their lives and they grow up and they leave these people behind.”

Still Kaisers life was for the most part unchanged by the realities facing his two neighboring families. His life too went on but his heart remained open.

Kaiser who by profession is a commercial interior designer was locked into the TV. Drawn to ABCs “Extreme Makeover: Home Edition ” he became intrigued.

His creative mind was saying “Man I wish I could do that.”

And then it dawned on him “I really could but on a scaled-down basis.”

Kaiser already had some of the know-how but after watching the show he began his own research. Through online investigations Kaiser found an organization in Detroit that helped kids with similar situations as those of his neighbors.

“I decided this is what I wanted to do ” he says.

But then tragedy would strike closer to home.

Kaisers daughter Stacey Kaiser who was in her early 20s “went from climbing mountains and snowboarding with the boys because the girls couldnt keep up with her ” Kaiser recalls “to being wheeled into Wilmington Health with some disease. We had no idea what it was.”

Stacey was diagnosed with Lymes disease and Kaisers focus shifted while he and his wife cared for their daughter.

Years later Kaiser was in his office looking for a file.

“I opened up this drawer ” he begins “And the file that I had made three years before was the only file I could see. It was like it popped up. And I reached down there and opened it up and rekindled the whole concept of what I wanted to do.”

Three weeks later in November 2007 Kaiser and his wife Susan Kaiser were at Wrightsville United Methodist Church attending an alpha course. They broke into small groups. There were 12 in Kaisers group. The experience fanned a flame from the spark he had carried in his mind for years.

Susan admitted her surprise later to her husband. But the group surrounding Kaiser including his wife had faith in what he brought to the table and jumped on board.

“It was the right place and the right time ” Kaiser says.

With the kindhearted help of his faith community and the support of local interior designers remodeling teams and in-kind donations Kaiser founded the 501(c)(3) he calls Welcome Home Angel.

The nonprofit does essentially the same thing that the inspiring “Extreme Makeover: Home Edition” does but for low and middle-income families who live within a 25-mile radius of Wilmington (on a smaller scale) for children ages four to 17 who have suffered a life-altering illness or injury.

Today celebrating Welcome Home Angels four-year anniversary Kaiser and other volunteers are proud to have aided more than a dozen families. Through renovations like wheelchair ramp additions or modifying a home to meet ADA standards which make life easier for parents and siblings and by redesigning the childrens rooms to make it their own Kaiser has made their homes home again.

Little Lillian and Kaylee Pettigrew celebrated their sixth birthdays on Oct. 4.
Mr. Kaiser shares a birthday with the twins although they were unaware of that fact until recently.

But more serendipitous things have happened; earlier in the year Lillians physical therapist called Kaiser asking for his help.

Six years and one month ago Lillian and Kaylee were born. Lillian came first and both were born much earlier30 weeksthan expected. Their mother Darcie Pettigrew stayed in New Hanover Regional Medical Center for a month on bed rest while she was pregnant because her amniotic fluid was leaking.

“We had a pretty eventful pregnancy ” Darcie explains.

In utero Lillian had a stroke which left her with cerebral palsy-spastic quadriparesis.

Lillian is unable to walk and for the most part unable to speak.

But her mother says “She signs. She says yes. She can communicate well enough to get what she needs.”

She smiles contently as her mother speaks proudly of Lillian and as her father Andy Pettigrew prepares her buttered toast and grits for breakfast.

When Lillian hears light footsteps coming down the hall she knows its Mama. When theyre heavy she can tell Daddy is on his way. And when she hears someone running she knows its Kaylee who tells her mother she wished she could have a chair with wheels of her own like Lillians.

Kaylee and Lillian share the same room. They wouldnt have it any other way. Even still Lillians world is different from her twin sisters.

“This is the reality of our life ” Darcie says “but it isnt what defines our life.”

So when Susan Kaiser was appointed as the Pettigrews guardian angelWelcome Home Angels title for its liaisonsshe visited the family to ask them what it was they needed what they wanted.

“With them ” Darcie says “we didnt have to explain anything.”

There was no need to prove they qualified for help as other agencies require. When the Kaisers first visited the Pettigrews home Darcie was barely able to lift Lillian in her stroller to get through the front door. The bathroom was too small. Lillian needed a bed that could also be used as a changing table. And she needed to love her room because its where Lillian spends most of her time.

Today when Lillian and Kaylee come home from kindergarten they take the new ramp indoors. In their shared room they come home to the beach. All of the problems they had before are gone. Instead of a bathtub the girls share a shower with a seat. Lillian also received a new bed making it easier for her parents to lift her. Life is simpler. Life is good.

Along with a built-in chest of drawers the girls received beach-inspired window treatments and linens. Their pale yellow walls are hand-painted with sand shells waves two surfer girls and an open sky.

Just above her closet door hangs an angel made from a scallop shell reminding them that they are always welcomed home each and every day.

When Kaiser revisits the Pettigrews well after his work has ended he learns that he and his friend Lillian share the same birthday. At first Kaiser is shocked. What are the odds?

Then Darcie turns to him and says “It was meant to be John.”

The annual Christmas Festival of Homes Tour benefitting Welcome Home Angel will feature six luxurious Landfall homes decorated for the holidays which will remain open to the public from 2-5 p.m. on Saturday and Sunday December 10 and 11. Tickets are $25 and available at Indoff Business Interiors NoFo La Bella Forma Landfall Realty Realty World Cape Fear. Shuttles will leave from the Realty World Cape Fear office at the Forum for non-Landfall residents/members.