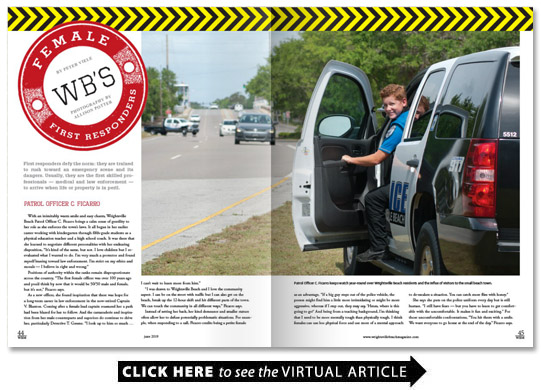 With an inimitably warm smile and easy charm Wrightsville Beach Patrol Officer C. Ficarro brings a calm sense of gentility to her role as she enforces the town’s laws. It all began in her earlier career working with kindergarten through fifth-grade students as a physical education teacher and a high school coach. It was there that she learned to negotiate different personalities with her endearing disposition “It’s kind of the same but not. I love children but I re-evaluated what I wanted to do. I’m very much a protector and found myself leaning toward law enforcement. I’m strict on my ethics and morals — I believe in right and wrong.”

Positions of authority within the ranks remain disproportionate across the country “The first female officer was over 100 years ago and you’d think by now that it would be 50/50 male and female but it’s not ” Ficarro says.

As a new officer she found inspiration that there was hope for a long-term career in law enforcement in the now-retired Captain V. Blanton. Coming after a female lead captain reassured her a path had been blazed for her to follow. And the camaraderie and inspiration from her male counterparts and superiors do continue to drive her particularly Detective T. Greene. “I look up to him so much … I can’t wait to learn more from him.”

“I was drawn to Wrightsville Beach and I love the community aspect. I can be on the street with traffic but I can also get on the beach break up the 12-hour shift and hit different parts of the town. We can touch the community in all different ways ” Ficarro says.

Instead of setting her back her kind demeanor and smaller stature often allow her to defuse potentially problematic situations. For example when responding to a call Ficarro credits being a petite female as an advantage “If a big guy steps out of the police vehicle the person might find him a little more intimidating or might be more aggressive whereas if I step out they may say ‘Hmm where is this going to go?’ And being from a teaching background I’m thinking that I need to be more mentally tough than physically tough. I think females can use less physical force and use more of a mental approach to de-escalate a situation. You can catch more flies with honey.”

She says she puts on the police uniform every day but is still human. “I still have fears — but you have to learn to get comfortable with the uncomfortable. It makes it fun and exciting.” For those uncomfortable confrontations “You hit them with a smile. We want everyone to go home at the end of the day ” Ficarro says.

“Are you really going to rescue me if I get caught in a rip current?”

“What are you doing up there?”

“Oh you get to suntan all day.”

Despite any preconceptions Smiraglia declares with humble honesty “I just love the idea of first responding and being there for someone when they’re at the worst — when they’re scared to death — and being the person to help them.”

Smiraglia has had to work hard to get to where she is today. As an accident-prone young girl with no sense of self-preservation she suffered injuries that prevented her from playing collegiate soccer. Attending UNC Wilmington but unable to give up on that dream she found an alternative route to earning scholarships by excelling at track. Smiraglia’s tenacity and athletic competitiveness paid off when she tried out for Wrightsville Beach Ocean Rescue three years ago. Despite Smiraglia’s prowess at track she was not a collegiate-level swimmer and had to work even harder to qualify. Further Smiraglia earned her Advanced EMT certification to enhance her own skills beyond the required level.

If she’s not on the stand in the summer or driving the Ocean Rescue patrol truck she’s employed as a town firefighter. She’s also at every class helping train new recruits bringing a valuable insight as a young woman who describes herself as “a tiny little thing.”

She finds the first responder community of Wrightsville Beach to be a family. “Everyone supports you in both your strengths and weaknesses. When you’re a part of it it’s something incredible. Together it makes this really powerful and amazing group of people who build each other up. It makes me more confident about being able to help people and save people’s lives.”

Smiraglia feels that being an EMT as a woman brings a unique advantage in that she can have a nurturing side that helps people feel comfortable when the something bad has happened to them. “When there are a bunch of unfamiliar faces coming up to you in uniform when you’ve been in an accident I think it’s important to have a nurturing approach to help calm someone down. Particularly with other women who I’m responding to.”

Though she is on a trajectory toward continued career success and calls it “The best job in the world and I can’t think of anything I’d rather do ” she is nervous about the proverbial ‘glass ceiling’ because “eventually I want to be a mom and to me that is a glass ceiling for a lot of women.”

It’s evident that Smiraglia’s energetic perseverance and driving work ethic will continue to allow her to succeed in anything she sets her mind on accomplishing. Although the idea of breaking the mold as a woman inspires her anyone who is dedicated to their craft and puts in the hard work to achieve their goals are the type of people who actually challenge Smiraglia to continue to be better.

Police detectives are often portrayed in TV and film as hardboiled gruff cynics and as such are rarely based on reality.

A 10-year police veteran Detective B. Neral has been working for the Wrightsville Beach Police Department for the past four years having started her career in law enforcement as a patrol officer five years prior for the City of Wilmington. As a wife and a mother to multiple children — one of whom has special needs — along with attending school full time and working as a police officer full time Neral has every right to portray that battle-hardened persona we think of when one thinks of a seasoned detective. Instead she has an effervescence and a passion for helping others that underline her impressive work ethic. “If it’s what you want to do you make it work.”

Ever since she was a little girl she knew exactly what she wanted to do with her life. It was her grandfather a heroic police sergeant who was killed in the line of duty during a bank robbery in New Jersey who influenced her to pursue her career. “He was such an amazing person that had a huge impact on me. There were even books written about him. But I have a lot of other first responders firefighters and military in the family too.”

The Wrightsville Beach Police Department has experienced some attrition over the last few years and there are a lot of new officers. Neral does not see this as a negative. “We’re a team and everyone helps each other in their strengths and weaknesses here. I can say everyone here creates an amazing dynamic. We all fit unique niches. It’s very well-rounded ” she says.

Working in Wrightsville Beach presents unique challenges for the police force. “The town goes from zero to 100 in the summertime so keeping busy in the off-season is important. There’s no gated bridge so the majority of people we are arresting are coming from out of town. And the residents are a lot more cooperative and helpful than in some other communities because they have a genuine vested interest which allows us to solve a lot more crimes by working with the community here ” Neral says.

As a female detective with seniority she is indeed breaking stereotypes but does not give any credence to being at any disadvantage because of her gender. She says you need to be able to get there when the time comes speaking of being smaller in stature and a woman in uniform during altercations “But I use my being a woman as an advantage because you’re not as threatening and you can reason with people and defuse situations. Maybe other female police officers have had different experiences but I can honestly say that I have never experienced anything — because I was a woman — that held me back. But I also wouldn’t see that as an excuse — if I fail at something I don’t say it’s because I’m small or a female it just means I sucked at it and then I try harder next time. I was raised that if you fail there is no quitting you just work your butt off to get to where you want to go ” says Neral.

She plans to continue her education by obtaining her master’s degree and hopes to one day join the federal level of law enforcement.