Brooke Ashley Casey and Michael Berrien Blemker Jr. are high school sweethearts from Raleigh. After being together for almost ten years Michael took Brooke for a visit to the Biltmore Estate in Asheville. “It snowed just enough to cover the ground and it was beautiful ” Brooke recalls. There in front of a warm fire Michael asked Brooke for her hand and she happily accepted. 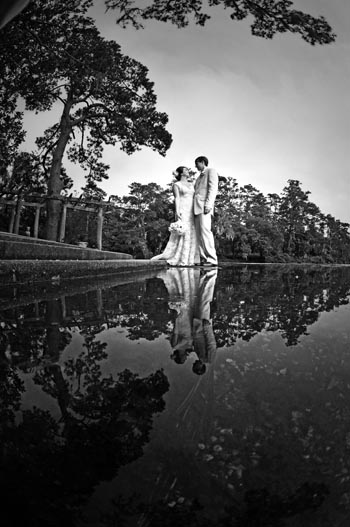 The two were joined together on June 6 2009 in Airlie Gardens. The wedding was made extra special with a musical performance by Michael’s sister and father and a candle-lighting ceremony.

The newlyweds honeymooned in St. Lucia. “We didn’t want to come back home ” Brooke says laughing. Michael and Brooke have since purchased a home in Raleigh. Brooke is now a nurse in the NICU at UNC Hospital and Michael works as a physical therapist in Oxford.

When Sarah Jensen and James “Kurt” Blackmon first met on Wrightsville Beach they were there to support their friends who were meeting for a date. Sarah explains “We were just going for moral support for them but we had a lot in common and really hit it off.” 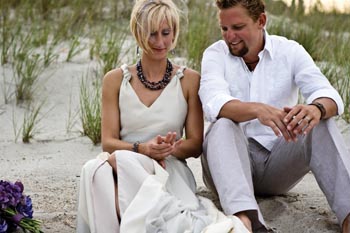 The couple had been dating for two years when after a scenic dinner at local landmark The Oceanic they strolled along the beach for a while and then Kurt knelt on one knee and asked Sarah to be his bride. Completely surprised Sarah too knelt down on one knee before accepting. “He still teases me about that ” the bride laughs.

The wedding took place on June 16 2009 on the very beach that brought them together. The reception followed a “message in a bottle” theme including having guests write letters to the newlyweds to be opened on their first wedding anniversary.

Sarah and Kurt spent their weeklong honeymoon in Wrightsville Beach with the family and friends who traveled and rented homes to be with them. They currently live in Wilmington where Kurt works for Tongue and Groove and Sarah works for Shell Island Resort.

After dating for four years Christopher “Clay” Williamson took Wendy Noonan to dinner at a lovely restaurant in Charleston. For dessert Wendy recalls really wanting a chocolate fudge brownie sundae. “When I got back to the table Clay told me he got me crme brle instead and I was kind of upset ” Wendy laughs. When the dessert arrived however Wendy was more than happy about the dish on which Clay’s proposal was written. 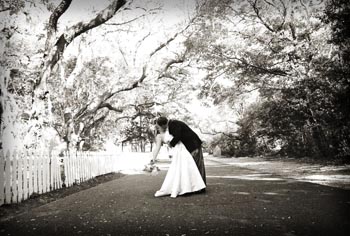 On April 24 2009 the couple was joined by more than 100 family members and friends at the Village Chapel of Bald Head Island. Before the ceremony Clay spoke to the minister. When asked why he wanted to marry Wendy he simply responded “Because she’s my best friend and the love of my life.”

The newlyweds honeymooned for two weeks in southern Ireland where they “cruised from city to city ” making their way from Dublin to Shannon. They now live in Raleigh where Clay owns his own business and Wendy works in the professional athletes division of Captrust Financial Advisors. 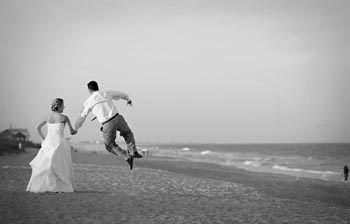 Amanda Dawn Britt had just finished a tennis tournament when she joined her boyfriend of 18 months Ashley David Cox for a lake-house getaway. After persuading Amanda to accompany him on a lake cruise Ashley asked Amanda to hand him the boat key. “I handed it to him not even noticing a ring attached to it ” Amanda laughs. When Ashley brought the ring to Amanda’s attention she was completely and happily surprised.

The wedding took place on April 25 2009 at the United Methodist Church of Wrightsville Beach. The newlyweds were then joined by family and friends for a fun-packed reception where the couple entered to the theme song from television’s The A-Team (inspired by their first names) and was cheered on by guests in a break-dancing battle.

Amanda and Ashley spent their honeymoon relaxing in Jamaica. They currently live in Wilmington where Amanda is an optometrist for Eye Associates of Wilmington and Ashley is Web site manager for Alcohol/Drug Council of North Carolina.

Patricia Ann Flake met Thomas Daniel Thornton in the summer of 2005 through their work for county health departments. The couple traveled to Raleigh for their first date where they joined friends for a concert and a night on the town. Patricia laughs “I guess you could say the rest is history we’ve been together ever since.” 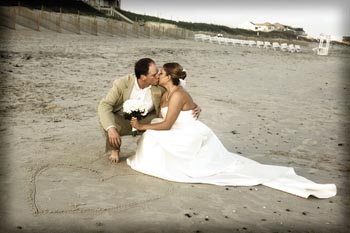 From then on Patricia and Daniel were all about the coast. Patricia explains “We had a whole beach relationship” that started when the two traveled to the Outer Banks for a vacation. After driving and shell hunting on the beach Daniel surprised Patricia by getting down on one knee and proposing.

The couple wed on May 16 2009 once again with their feet in the sand. “There was a little walkway out on the beach ” Patricia remembers. “My mother walked me down the aisle or sand I guess and I didn’t see anyone other than Danny the whole time.”

The newlyweds spent an adventurous honeymoon in Maui enjoying snorkeling helicopter tours and zip lining. They now reside in Currie and work for separate health departments.