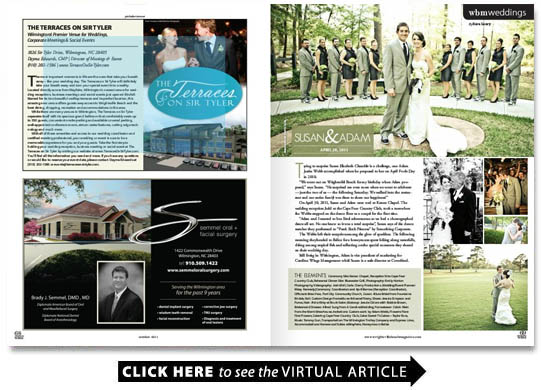 Trying to surprise Susan Elizabeth Chandler is a challenge one Adam Justin Webb accomplished when he proposed to her on April Fools Day in 2010.

“We went out on Wrightsville Beach for my birthday when Adam proposed ” says Susan. “He surprised me even more when we went to celebrate just the two of us the following Saturday. We walked into the restaurant and our entire family was there to share our happiness!”

On April 30 2011 Susan and Adam were wed at Kenan Chapel. The
wedding reception held at the Cape Fear Country Club took a turn when the Webbs stepped on the dance floor as a couple for the first time.

“Adam and I wanted to be a little adventurous so we had a choreographed dance all set. No one knew so it was a total surprise ” Susan says of the dance number they performed to “Punk Rock Princess” by Something Corporate.

The Webbs left their reception among the glow of sparklers. The following morning they headed to Belize for a honeymoon spent hiking along waterfalls diving among tropical fish and reflecting on the special moments they shared on their wedding day.

Still living in Wilmington Adam is vice president of marketing for Carolina Wings Management while Susan is a sales director at Coverbind.

When Lindsay Spiers left to study in Chile the summer of her junior year at the University of North Carolina Wilmington she realized that she was leaving behind more than her beach hometown. Hayes Harkey had stolen her heart.

Years later Hayes was down on one knee in New York City.

“We spent New Years Eve in the city. It was snowing and the lake in Central Park was frozen so we decided to take pictures. I was so surprised when he asked me to marry him ” says Lindsay whose family was also present to celebrate the happy couples January 2010 proposal.

On May 21 2011 Hayes and Lindsay married near the dunes at the Wrightsville Beach Surf Club. Walking down the aisle with her father to an arrangement of “Somewhere Over The Rainbow ” Lindsay inspired by her childhood love of “The Wizard of Oz ” wore ruby red slippers with her sparkling gown. With the ocean breeze in the background Hayes and Lindsay exchanged vows under the arbor he had created which now stands in their backyard.

Instead of throwing her bouquet Lindsay started a new tradition with her sorority sister bridesmaids by writing little notes on the bottom of their shoes. Whoever had danced off the letter the most by the end of the night would be next to walk down the aisle.

“There really arent very many chances to have every single person you love in one room so I wanted to make everything different and special ” says Lindsay who honeymooned with Hayes in Italy.

The two live in Wilmington where Hayes works as a commercial insurance agent at James E. Moore and Lindsay in pharmaceutical sales at Proficient Learning.

Anna Malia Ayers hadnt even been in Atlanta for two weeks before her best friend introduced her to Andrew Mark OBrien. The two hit it off immediately and have been together ever since.

Andrew popped the big question in 2009 when the two were visiting his family at their Lake Michigan cottage. Headed to the beach for impromptu family portraits Andrew and Anna walked ahead of the OBrien clan which had strategically fallen behind.

“Everyone in his family and mine knew that the proposal was coming ” says the happy bride who had no idea that her life would change that September day. As Andrew got down on his knee his father secretively took pictures of the entire moment.

Anna and Andrew exchanged rings at a Wrightsville Beach ceremony on July 31 2010.

The reception was a memorable one for the newlyweds and guests. A photo booth was set up and guests donned wigs fuzzy fur hats and fake mustaches for the evening. Found nowhere but on the dance floor Anna and Andrew had the time of their lives before jetting off to Maui for an incredible honeymoon.

Anna who works for AT&T and Andrew who works for a commercial real estate company have plans to travel in the future but right now are just enjoying life in Atlanta.

When Billie Lauren Harting and Jon Douglas Bibb began plans for their May 7 2011 wedding they knew they wanted to incorporate fun into the ceremony.

“We are huge Tom Petty fans and thought it would be cool if Billie walked down the aisle to an instrumental version of American Girl ” says Jon who was introduced to Billie seven years ago by his business partner.

Their outdoor ceremony reflected the couples love for music opening with a cello violin and classical guitar playing White Wedding by Billy Idol and concluding with Today by the Smashing Pumpkins. The newlyweds claimed that the music was one of the best parts of their Country Club of Landfall Ballroom reception and described the Charleston-based band that played Plane Jane as phenomenal.

“Everyone liked the music but people raved about the food ” says Billie who describes the Asian-inspired menu that featured sushi rolls a noodle bar and sake.

The happily married couple honeymooned at Sandals on St. Lucia. Relaxing and spending time together after the busy months of wedding planning were the highlights for Billie now back to work at NOFO at the Forum. Together Jon and Billie are still living in Wilmington and making plans to travel in the future yet memories of their big day still linger.

“We did a lot of different things at our wedding which made it special ” says Jon who owns Atlanta Bread in Wilmington. “Our ceremony was very cool and something Billie and I will never forget.”

Stacy Hayward met Keith Raine in Washington D.C. She knew the first night that something about him was special. The two became fast friends and soon started dating despite Keiths commitment to pursue a Marine Corps career.

A long distance relationship ensued until Stacy moved to Surf City last year where she and Keiths connection grew even stronger.

“Keith and I took a long walk one night out on the beach with my brand new dog. I told Keith I loved him almost as much as I loved my dog and he immediately asked me if I was sure about that. I saw his arm move and thought oh gosh this is happening as he got down on one knee and asked me to marry him ” Stacy says.

On September 18 2010 Stacy walked the sand barefoot toward Keith in a romantic ceremony. Wed by Keiths former youth minister the bride says the intimacy was the best part of her wedding. Friends read passages out of the bride and grooms favorite books including What Is Real from “The Velveteen Rabbit.”

The pair left the beach beneath a sword arch held by a few of their closest Marine friends.