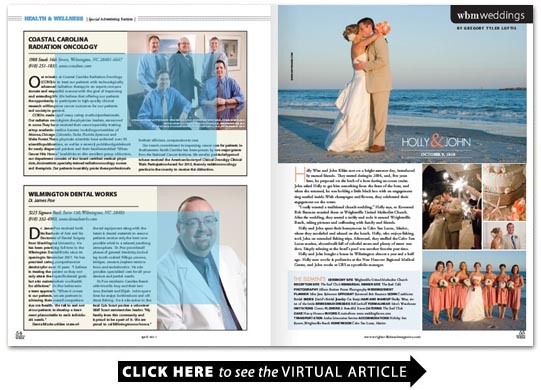 Kaitlyn Johnston and Chris Jarman first met on the golf courses around Appalachian State where they were on the womens and mens golf teams. They became friends over tee times and started seeing each other when they were college juniors in 2004.

Chris proposed on the anniversary of their fifth year of dating. After a long week at work Kaitlyn didnt want to make a big deal out of their anniversary. But Chris was adamant about taking her out to dinner at the Bridge Tender her favorite restaurant. He told her to wait for a moment and left the table. After a while their waiter told Kaitlyn that Chris had a surprise for her on the dock behind the restaurant. Thinking he had bought a boat she went out on the dock to take a look. Thats when Chris got down on one knee at the waters edge and presented the engagement ring that Kaitlyns father had made.

The wedding was held at St. Mary Catholic Church on October 2 2010. Friends and family came out and shagged all night. The newlyweds honeymooned in Antigua. Despite incessant rain Chris and Kaitlyn zip lined through rainforests and sailed on the clear blue water.

The couple lives in Charlotte where Kaitlyn works as the director of The First Tee of Charlotte a junior golf program and Chris works for Dixon in industrial sales.

When Daniel Duffy and Melissa Miller met at East Carolina University in 2006 Daniel said “You look like the kind of girl I could spend the rest of my life with.” This proved prophetic because on September 25 2010 Melissa and Daniel were married at Airlie Gardens.

“The wedding was amazing ” says Melissa. “We had a sand ceremony with sand from Wrightsville Beach and the New Jersey shore.”

After dating for three years Daniel took Melissa to Wrightsville Beach on a cold windy afternoon to look for sea glass. They had made a hobby of collecting sea glass from along the North Carolina coast and Melissa thought it would be just another scavenger hunt. Thats when Daniel found a large piece of sea glass buried halfway in the sand. When Melissa picked it up it had the words “Melissa will you marry me?” engraved on the front. Completely shocked Melissa turned around and saw Daniel on one knee. Hed had the sea glass custom-crafted for a proposal that she will never forget.

The couple spent their honeymoon week on the island of Bocas del Toro in Panama where they went horseback riding tuna fishing and island hopping.

They now reside in Wilmington near UNCW where Melissa works at a doctors office as a medical assistant and Daniel works as a dental assistant while he saves for dental school.

Holly Wise and John Kilian met on a bright summer day introduced by mutual friends. They started dating in 2004 and five years later he proposed on the back of a boat during an ocean voyage. He asked her to get him something from the front of the boat and when she got back he was holding a little black box with an engagement ring nestled inside. They had champagne and flowers on the boat and celebrated their engagement out on the water.

“I really wanted a traditional church wedding ” says Holly so Reverend Bob Bauman married them at Wrightsville United Methodist Church. After the wedding they rented a trolley at Wrightsville Beach and rode it around taking pictures and celebrating with family and friends.

They spent their honeymoon in Cabo San Lucas Mexico where they snorkeled and relaxed on the beach. Holly who enjoys fishing took John out on extended fishing trips. Afterward they strolled the Cabo San Lucas marina a boardwalk full of colorful stores and plenty of street vendors. Simply relaxing at the hotels pool was another favorite activity.

Holly and John bought a house in Wilmington almost a year and a half ago. Holly now works in pediatrics at the New Hanover Regional Medical Center and John works at UBS as a portfolio manager.

During the North Carolina Holiday Flotilla in 2008 Bridger Williamson and Nicholas Hahn met at King Neptune restaurant on Wrightsville Beach and all bets were off.

“It was definitely love at first sight ” laughs Bridger. The two started dating that very same night. They even moved to Asheville together so Bridger could continue her career as a real estate agent.

Two years later on one unforgettable November morning Bridger and Nick were celebrating Nicks birthday by camping out at the Max Patch Mountain near Asheville. The sky was illuminated by a full meteor shower despite the rising sun. Painted with warm colors the only things visible for miles were trees and mountains. Thats when Nick woke Bridger up with a ring in his hand.

The wedding was October 23 2010. Despite forecasts of cold weather it was 80 degrees and sunny at the Carolina Yacht Club where the ceremony was held. Andy Burke played music while Bridger and Nick got ready.

The newlyweds honeymooned for a week in Belize where they visited cacao farms and rode horses while staying at the beautiful Cotton Tree Lodge.

The couple resides in Wilmington where Bridger works in healthcare and Nick is a motorcycle mechanic.

Mary McNeely and Michael Royal met in high school but they werent students. Mary was a guidance counselor at Mooresville High School and Michael was an AP calculus teacher. Their co-workers introduced them and they started dating in August 2007.

Two years later Michael brought Mary to a family-owned farm. “He said he was looking for a place for his cross country team to run ” Mary says. But Michael wasnt looking for a cross-country location; he was looking for the perfect place to propose. On a sunny July day in front of a pretty pond Michael proposed to Mary presenting her with a beautiful diamond ring. They were married on October 23 2010 at Saint Thomas Preservation Hall in Historic Downtown Wilmington.

“I had a four-leaf clover in my shoe ” Mary laughs. “The same one my Mom had in her shoe at her wedding.” The clover was a traditional good luck charm handed down through her family for weddings. Michaels cross-country team made an appearance acting as ushers during the wedding. They had their running shoes on with their formalwear. During the wedding it rained just lightly enough to create a beautiful rainbow that served as a backdrop to the event. Suitably Marys first dance with her father was to

Rainy Day Bells by the Globetrotters.

The couple honeymooned at Harbour Island in the Bahamas.

Michael and Mary live in Mooresville and still work at Mooresville High School where Mary is a guidance counselor and Michael is an assistant principal and coach of the cross-country team.