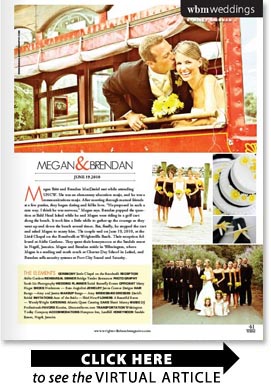 Megan Britt and Brendan MacDaniel met while attending UNCW. She was an elementary education major and he was a communications major. After meeting through mutual friends at a few parties they began dating and fell in love. “He proposed in such a cute way. I think he was nervous ” Megan says. Brendan popped the question at Bald Head Island while he and Megan were riding in a golf cart along the beach. It took him a little while to gather up the courage as they went up and down the beach several times. But finally he stopped the cart and asked Megan to marry him. The couple wed on June 19 2010 at the Little Chapel on the Boardwalk at Wrightsville beach. Their reception followed at Airlie Gardens. They spent their honeymoon at the Sandals resort in Negril Jamaica. Megan and Brendan reside in Wilmington where Megan is a reading and math coach at Charter Day School in Leland and Brendan sells security systems at Port City Sound and Security.

“He did such a great job surprising me; I had no idea ” says Ashley Moninger Bright on how William Bright Jr. proposed marriage. William asked Ashley to be his wife just before last Christmas on Black Friday when they were decorating the tree. He handed her a box and said it was their first ornament for their first Christmas together. She opened the box and saw a red bulb with writing on it: “Will you marry me?” When she looked up he was on one knee holding out a beautiful ring. The couple was married and hosted their reception on September 18 2010 at the Country Club of Landfall. The weather cooperated perfectly and Ashley and Williams wedding guests 200 family members and friendsenjoyed a spectacular day and a wonderful wedding. The newlyweds honeymooned at the Sandals resort in Ocho Rios Jamaica. Ashley and William live in Wilmington. Ashley works in respiratory medical sales for Lincare and William is a civil engineer at Talbert and Bright.

Sarah Pless met Nate Askwith for the first time at Caf Phoenix in Historic Downtown Wilmington. “He was late showing up; he always is ” laughs Sarah. The proposal happened while the couple was in Germany. Nate spent four years growing up there so he and Sarah went to Germany as well as to London and Paris for an extra-long romantic weekend. The couple went to a beautiful castle called Neuschwanstein and thats where Nate asked Sarah to be his bride. Though Sarah was taken completely by surprise she said “Yes ” immediately. They were married on May 5 2010 at St. Pauls Lutheran Church in Wilmington. The reception was held at the beautiful Bellamy Mansion Museum of History and Design Arts. Demonstrating their shared love for the cult-hit 1980s movie Nerds Sarah and Nate hired an 80s Nerd band named Chicago Spazmatics who kept the crowd of 200 guests going strong throughout the night. The newlyweds honeymooned on Italys Amalfi Coast. They reside in Wilmington where Sarah is a dentist and Nate is an engineer for General Electric.

When native Wilmingtonians Amy Craig Reamer and Daniel Reamer attended high school together they had no idea that one day they would end up getting married. Ten years after graduation they reconnected and have been inseparable since. Daniel proposed on the rooftop of the downtown Wilmington house he was renting. With the Cape Fear River in sight he shocked Amy with the question of a lifetime: Will you marry me? “I was so surprised and happy I started crying and couldnt see anything out of my contacts ” Amy says getting emotional all over again. “I could barely see the ring but I knew it was beautiful.” Amy and Daniel were married on June 19 2010 at Grace Methodist Church. The reception followed at the Surf Club on Wrightsville Beach. Their honeymoon was in Playa Mujeres Mexico. The couple resides in Wilmington where Amy is attaining her Ph.D online at N.C. State in industrial and systems engineering and Daniel is a dentist.

Holly Campbell and Graham Smith met through mutual friends while dating other people when they were both attending East Carolina University. They were friends for a few years but when they both became single they started dating. “He did such an amazing job proposing ” Holly remembers. The big night started with a romantic dinner at Bonefish Grill. Afterwards Graham said he forgot something at Hollys parents house which Holly thought was odd but went along with anyway. When the couple arrived at the house there were no cars in the driveway and the only thing Holly noticed were candles lit in the backyard. As they made their way around the house Holly saw rose petals on the ground champagne chilling and heard music playing. Graham got down on one knee and asked her to marry him and minutes later both Grahams and Hollys families came around the corner surprising her. The wedding and reception were held on July 31 2010 at Airlie Gardens. The honeymoon was in Riviera Mexico at the Imperial Valentine Resort. Holly and Graham live in Wilmington. Holly is a registered nurse at New Hanover Regional Medical Center and Graham works as a project estimator for Kent Homes.