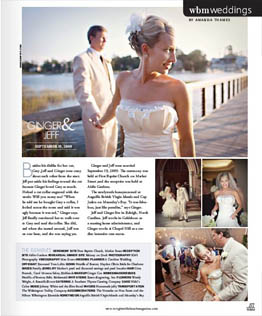 Besides his dislike for her cat Grey Jeff and Ginger were crazy about each other from the start. Jeff put aside his feelings toward the cat because Ginger loved Grey so much. He had a cat collar engraved with the words: Will you marry me? When he told me he bought Grey a collar I looked across the room and said it was ugly because it was red Ginger says. Jeff finally convinced her to walk over to Grey and read the collar. She did and when she turned around Jeff was on one knee and she was saying yes.
Ginger and Jeff were married September 19 2009. The ceremony was held at First Baptist Church on Market Street and the reception was held at Airlie Gardens.
The newlyweds honeymooned at Anguilla British Virgin Islands and Cap Juluca on Maundays Bay. It was fabulous just like paradise says Ginger.
Jeff and Ginger live in Raleigh North Carolina. Jeff works in Goldsboro as a nursing home administrator and Ginger works in Chapel Hill as a cardiac intensive care nurse.

Kristy Michelle Carr and John Gray Graham Holt met during the summer of 2006. They were at a birthday party were introduced by their friends and hit it off immediately.
Kristy has always been a fan of the movie Dirty Dancing. The night that the couple met Kristy and Gray moved from a conversation about the movie to trying out their dancing moves. We ended up trying to do the lift from the last dance in the movie Kristy laughs.
While skiing in Colorado in January 2009 Gray proposed. Hes always been very spontaneous so even though he wanted to propose at dinner he decided to pop the question out of the blue says Kristy. They were sightseeing riding the ski lift up and down the mountain. On the way down Gray claimed the lighting was perfect for a picture. He got down on one knee and realized the ring was in his camera bag. He proposed on the spot.
On their wedding day May 21 2010 they danced their first time as husband and wife to (Ive Had) The Time Of My Life by Bill Medley and Jennifer Warnes. Kristy switched into a dress similar to the one Baby wore in the movie Dirty Dancing and Gray dressed like Johnny. The newlyweds danced like Baby and Johnny lift and all.
Today Kristy and Gray live in Wilmington. She is the event planner at Bluewater-An American Grill and Oceanic Restaurant. He is an estimator for Southern Industrial Constructors.

It always happens when you least expect it says Lee Ann Mitchell discussing how she met her husband Jess McClain Bolton.
Lee Ann was in town visiting friends and Jess had just moved to Wilmington from Florida. They were at Tinyz Tavern on 17th Street and Jess happened to know the friends Lee Ann was visiting. He was seeing someone else at the time but something clicked between them. When Lee Ann went home to Greensboro they decided to stay friends.
Over time their relationship grew and soon they were dating. After nine months Jeff proposed. He blindfolded me and I could feel the heat from the candles. When I took the blindfold off I was so overwhelmed by all of the candles and red pink and white rose petals everywhere that I didnt even see the ring laughs Lee Ann. Jess spelled out I heart you on a glass table with tealight candles and had placed the ring in the middle of the heart. After Lee Ann said yes they drank champagne together for the first time and discovered that neither of them liked it!
They remained a long-distance couple until six months before the wedding and said I do on May 15 2010 on Wrightsville Beach in front of 170 friends and family members.
The couple resides in Wilmington where Lee Ann is the director of sales at Comfort Suites Magnolia Greens in Leland and Jess is an account manager for Spectrum Laboratories.

He was from Richmond Virginia and she was from Fayetteville North Carolina. In the summer of 2000 mutual friends introduced Mary Lawrence Vance and Matthew Howell Sadler at a party in the Port City. Instant friends they camped out the next night in Masonboro and began a four-year platonic friendship.
She was at Meredith College in Raleigh North Carolina. He was at Methodist University in Fayetteville. They visited they called and they kept a close connection. When the relationship evolved Mary Lawrence claims I thought it was a summer fling but when Matthew moved back to Virginia they became determined to keep the relationship alive.
Many moves later the couple settled down in Fayetteville. On Christmas Eve 2007 Matthew gave Mary Lawrence a box. Inside each box was a smaller box and when she finally found the smallest box it held a princess keychain. Surprised and confused she looked up and Matthew had the ring out. All I could say is Are you serious? laughs Mary Lawrence.
Their beautiful Wrightsville Beach wedding was held on April 24 2010. They are waiting to honeymoon at a later date and are enjoying being newlyweds in Fayetteville. Matthew is a professional soccer coach at Fayetteville Christian School and Methodist University. Mary Lawrence works at Rhudys Jewelry Showroom buying and selling the jewelry behind the scenes.

As UNC Wilmington students in 2004 Pamela Suzy Williamson and Benjamin Thomas Kearns bonded through surfing. He was a punk from the North and I was a goody two-shoes from the South laughs Suzy. She complained that he could deal with cold water easier than she could.
She didnt complain in December 2008 though when Benjamin sent her on a scavenger hunt from the bedroom to the ocean. Suzy found a little note left beside a long-stem rose on her pillow that took her to her car. Following a series of notes she ended up in Wrightsville Beach where she found a wooden stick in the ground with another note attached. It read: Youve been the love of my life now get out here so I can ask you to be my wife. Suzy found Benjamin surfing in the cold ocean where he had her ring in a duct-taped plastic bag inside his wetsuit.
Their wedding was held at Orton Plantation and they honeymooned at Cape Hatteras hoping to catch a few waves. The ocean was so flat that week. It ended up being for the best though because we were able to be tourists instead says Suzy.
Suzy and Benjamin reside in Wilmington. She is a senior financial analyst at PPD. He works at South End Surf Shop in Wrightsville Beach. They surf whenever possible.