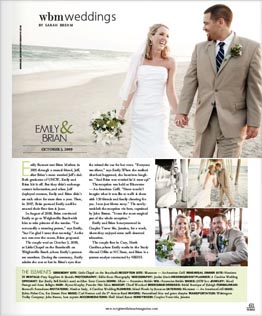 Emily Burnett met Brian Marlton in 2005 through a mutual friend Jeff after Brians mom married Jeffs dad. Both graduates of UNCW Emily and Brian hit it off. But they didnt exchange contact information and when Jeff deployed overseas Emily and Brian didnt see each other for more than a year. Then in 2007 Brian pursued Emily until he secured their first date in June.

In August of 2008 Brian convinced Emily to go to Wrightsville Beach with him to take pictures of the sunrise. “Im not usually a morning person ” says Emily “but Im glad I went that morning.” As the sun rose over the ocean Brian proposed.

The couple wed on October 3 2009 at Little Chapel on the Boardwalk on Wrightsville Beach where Emilys parents are members. During the ceremony Emily admits she was so lost in Brians eyes that she missed the cue for her vows. “Everyone was silent ” says Emily. When she realized what had happened she burst into laughter. “And Brian was worried hed mess up!”

The reception was held at Bluewater – An American Grill. “Never would I imagine what it was like to walk in there with 150 friends and family cheering for you. I was just blown away.” The newlyweds left the reception via boat captained by John Batson. “It was the most magical part of the whole reception.”

Emily and Brian honeymooned in Couples Tower Isle Jamaica for a week where they enjoyed some well-deserved relaxation.

The couple lives in Cary North Carolina where Emily works in the Study Abroad Office at NC State and Brian is a systems analyst contracted by NIEHS.

Stephanie Sanders and her friends were camping on the north end of Carolina Beach over the Fourth of July weekend in 2007. One of her friends brought along a co-worker Ryan Zewatsky. “He wasnt your typical guy ” says Stephanie. “He was nice and caring.”

A year later in July 2008 Stephanie and Ryan went on vacation to the mountains of Cherokee North Carolina with Stephanies family. During a hike to a waterfall Ryan proposed.

“I grew up at the Carolina Yacht Club ” says Stephanie whose parents are members “and knew I wanted to get married there.”

The coupled wed on October 3 2009. “I think every bride remembers walking down the aisle and looking into his eyes. Its the moment you realize this is it youre getting married!”

During the reception also at the Carolina Yacht Club Stephanie and Ryan surprised their guests with a choreographed dance to a variety of songs including Cotton-Eyed Joe Thriller and music from Grease. “Ryan and I are not very serious people ” says Stephanie. “This seemed a lot more fitting for us.”

Due to school and work the newlyweds opted not to go on a honeymoon. Instead they are planning a trip for their first anniversary. Theyre still deciding on a location.

The couple resides in Norfolk Virginia where Stephanie is a store manager for New York & Company and Ryan is studying to be a physicians assistant while working at Riverside Regional Medical Center.

CATERING: Middle of the Island

A few months after Jill Donaldson and Chris Supranowitz moved to North Carolina with Jills parents the couple who had been dating since 2008 though they knew each other while in high school at Penfield High School in Penfield New York went to their favorite Thai restaurant for a date. After dinner they decided to head home play Rock Band and watch a movie. Jill fell asleep. As she slept Chris carefully slid the ring on her finger. He patiently waited for Jill to wake. When she did early the next morning she felt something on her hand and saw the ring. She turned to Chris who asked her to marry him on the spot. “It was absolutely perfect ” says Jill.

Jill and Chris wed on October 18 2009 at access 43 on Wrightsville Beach. “It was a cloudy chilly day at the beach ” says Jill “but there was a perfect moment when the sun peeked out and shined down on us just as we were saying our vows. It was amazing.”

At the reception at The Balcony on Dock Street the newlyweds danced to Hard to Concentrate by Red Hot Chili Peppers and friends and family enjoyed a photo booth.

The couple honeymooned in Australia for 10 days. There they went to the Sydney Opera House the Sydney Aquarium and went to a wildlife park to pet and feed kangaroos and koala bears.

The newlyweds live in Brunswick Forest. Chris works as a remote Applications Engineer for QED Technologies and Jill is an occupational therapist for Creative Hands Occupational Therapy Inc.

INVITATIONS: Bride and groom made them with help from Linda Donaldson mother of bride

CATERING: The Balcony on Dock Street

Drew Davis met Stuart Wilson through mutual friends while at Auburn University in Alabama. Things clicked and they soon started dating. In 2008 while hiking at rustic Franklin D. Roosevelt state park in Georgia Stuart asked Drew to be his bride.

Drew grew up in Charlotte North Carolina and wanted to get married somewhere fun. She had heard of Bald Head Island and after one visit she knew it was the place.

“It was hard planning the wedding ” says Drew who at the time lived in Atlanta. “But the people at Bald Head Island are great! They made it so much easier.”

Stuart and Drew married on September 19 2009 at the Village Chapel of Bald Head Island. “I remember riding over on a golf cart from the bridesmaids house to the chapel with my dad ” says Drew. “I was so nervous and that moment was surreal.”

At the rehearsal Drew was told to remember to speak up during the vows but it was Stuart at the ceremony who whispered the whole time.

At the reception at Harbourside Pavilion the newlyweds danced to Fly Me to the Moon. “It was an awesome awesome night!” says Drew.

For nine days the newlyweds honeymooned in Santorini and Mykonos Greece. They enjoyed the beaches four-wheeling hiking and the local food.

The couple is currently in the process of moving to Birmingham Alabama. Stuart works in sales for Atlas Roofing Corporations and Drew is a pilot for Delta Connection.

Nathalie Lovoy met Ian Lovell while watching a UNCW basketball game at a mutual friends house in 2006. “I was very intrigued ” says Nathalie “because he was funny.” About a month later they went on their first date and have been together ever since.

In May 2009 the morning after staying out late with friends Nathalie sat on the couch she hadnt showered yet and her hair was a mess. It was at this moment that Ian popped the question. “He surprised me ” says Nathalie. “We had been discussing marriage and I told him he wasnt going to surprise me.”

“My mom helped me out a lot in the planning ” says Nathalie. “Without her I would have gone crazy.”

The couple wed on March 27 at Saint Thomas Preservation Hall. Nathalie admits she was nervous to have 200 friends and family focused on her as she walked down the aisle but that “as soon as I saw Ian we locked eyes and it was as if it was just the two of us.”

The newlyweds honeymooned in the Bahamas for seven days where they caught up on sleep and relaxed. “It was great!” says Nathalie.

The couple lives in Wilmington where Ian works for the city of Wilmington and Nathalie works at Doctors Vision Center.