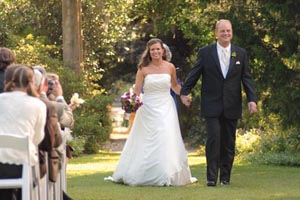 But really it was a dark and stormy night. Before you cry clich consider this: This is no ghost story. This rather is a love story and we commence it in November 2006 just moments before our protagonists first face-to-face encounter.

Enter Allison Breiner right and Mark Potter left holding phones to ears. Though the two have been talking for several weeks their conversations have thus far been mediated by cell towers and Internet service providers. The time is 8:00 p.m. Wind competes with rain.

“What?!” says Allison and then “Want company?”

Our setting changes to resemble the north end of Carolina Beach. Props include two folding beach chairs positioned on the lee side of Marks truck and occupied by our leading gent and lady as well as a reel and bait which sit untouched on the sand while he and she talk long into the night and find each others hands and do not think of fish.

Their story is still very much unfolding but highlights include Marks proposal to Allison in March 2009 (which he considered a birthday present to himself) the couples October wedding at Airlie Gardens and an emphatically outdoorsy honeymoon in Australia attended by a phantasmagoria of koalas kangaroos manta rays sea turtles and other assorted personages.

Our hero builds custom swimming pools as the owner of Liquid Assets Pools and our heroine is the director of photography at Wrightsville Beach Magazine and Lumina News. 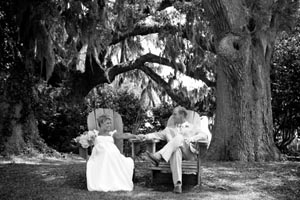 Ashley Howell was finishing her junior year at East Carolina University when Robert McGee already living in Wilmington came to town for an alumni soccer game. He left she stayed months passed and when the two spoke again they were impatient to see each other. The problem: Robert had plans to spend the weekend with his family at their beach house. Not a problem Robert insisted Ashley should come along.

“We had only hung out once!” Ashley recalls. “And all his family kept saying How long have you two known each other?”

Four years later on another beach house weekend Robert proposed on a boat hed chartered for the afternoon and when he and the elated bride-to-be arrived back at the house both his and her families were there to surprise her and celebrate.

Before their wedding at the Airlie Gardens Minnie Evans Bottle Chapel the couple spent a week with friends and family in a house rented on Wrightsville Beach and after the reception at Boca Bay? Yep they mounted their beach cruisers (given to each other as wedding gifts) and headed back to the beach to spend the rest of the day.

Robert is the athletic director and mens soccer coach at Cape Fear Community College and Ashley works as a clinical researcher for Quintiles. 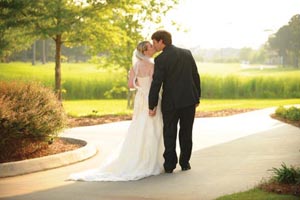 “No I dont want to go for a walk on the beach. Its March; its freezing.”

And then “What are you doing on your knees crazy person? Are you going to lie down on a frozen beach?”

But the moment she realized Ryans machinations amounted to more than a deranged quest for frostbite the frozen empty beach melted into an inconceivably romantic setting for an inconceivably perfect proposal.

Attending a whopping 15 friends weddings over the previous two years had given the couple a clear sense of their personal wedding dos and donts. “I was set on a beach wedding ” Ashley says “but without the sand!” No sooner had they seen it than they knew Landfall was the spot.

The highlights of the May 30 celebration were many but even months later over Thanksgiving dessert no one could help reminiscing about the cake a feat of unequaled measure fashioned by the Dessert Divas with a handcrafted sugar paste damask design.

After an adventuresome honeymoon in Belize the couple returned home to Washington DC where Ryan runs his business Enhanced Roofing and Remodeling and Ashley is a national account manager for Rubbermaid commercial products.

Even though shed moved to Charleston only days before Kathryn Calder was already enamored of the place … or was it the people … or was it one person this James shed met the previous night through mutual friend Mary Catherine? The same James she had plans to meet again today? 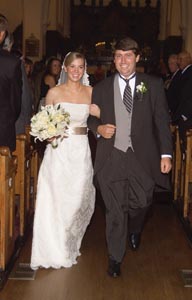 That was August 2005. Theyve met every day since.

Since Kathryns entire family hails from the Azalea Coast and since James Barmore Jr. fell in love with his bride and her native stomping ground in tandem the decision of where to wed would have been fairly straightforward under any circumstances. But since a Wrightsville Beach wedding means the possibility of Trolley Stop Hot Dogs it didnt even require discussion. “I dont think the guests [all 350 of them!] realized there was other food!” says Kathryn.

Think “honeymoon in paradise” is just a trope? The Barmores might have something to say about that. After hiking biking and exploring ancient ruins in the Maya Mountains of Belize the couple migrated east to spend the rest of the week fly fishing sunning and relaxing with the Caribbean Sea as their doorstep.

James and Kathryn live in Clemson South Carolina where James is enrolled in the Master of Real Estate Development program and Kathryn works for the Anderson Independent-Mail and Skirt! magazine.

hen her good friend Jennifer was getting married Becky Brown didnt wait for bouquet-toss auspices she met Ty Frederick at the bachelorette party. When their first date found them locked in a Crayola tournament of tic-tac-toe on the table cover it was clear there were Xs and Os in the future. When Ty presented Becky with Chance a Boxer puppy (who now weighs in at 90 pounds) for graduation the couple was quick to dub him “our baby.” And when two summers ago as the three sat by a waterfall at sunset after a hike up Chimney Rock Ty argued that Chance thought it was about time Mom and Dad got married well Becky just had to agree. 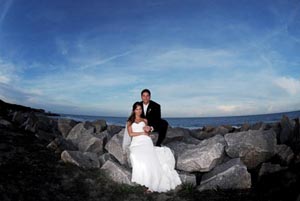 The May 16 2009 ceremony took place at sunset at Fort Fisher and glistened with personal touches including nine-month-old nephew Camerons debut as “tiny groomsman” and the vocal talents of Tys grandfathers quartet the Frederick Brothers. The reception at the Brown home on the Intracoastal Waterway was truly family-flavored: Beckys mom carved the couples names into a tree her dad constructed the dance floor and a family friend baked “the best ever” chocolate chip cookies as wedding favors.

The couple honeymooned in Maui where they hiked and rode horseback through pineapple fields and rainforests. Ty now works as a financial specialist for Wachovia and Becky is a school nurse for the New Hanover County Health Department.

Babur De los Santos friend gave Chipotle the hot new Mexican place in downtown Chicago such high marks that although Babur had never eaten there he felt confident it would be just the sort of classy joint that would impress Lura Forcum on their first date. He envisioned ambience authenticity um plates. 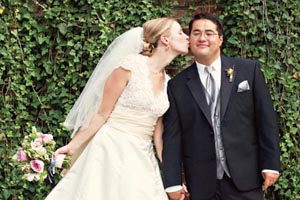 “There was nowhere to park and we ran through the pouring rain and when we got there I thought What?! Why have we gone through all this effort for fast food?!” But we can no more deny it than we can explain it theres just something about a cheap burrito and when years later Babur confessed hed been humiliated the moment they stepped into this apparent oasis of bright lights bustle and foil it was to the same girl who hadnt been deterred once upon a time by his curious take on haute cuisine.

At the June 20 2009 wedding and reception at the City Club at de Rosset in Historic Downtown Wilmington antique silver serving pieces and teapots (many of them heirlooms of friends and family) mingled with the mansions antebellum charm for an amalgam that sparkled with “Southernness.”

The couple escaped the 96-degree heat of the day to honeymoon in Alaskan waters and now reside in Bloomington Indiana where Babur is an economics professor and Lura works in media relations at Indiana Universitys Kelley School of Business.