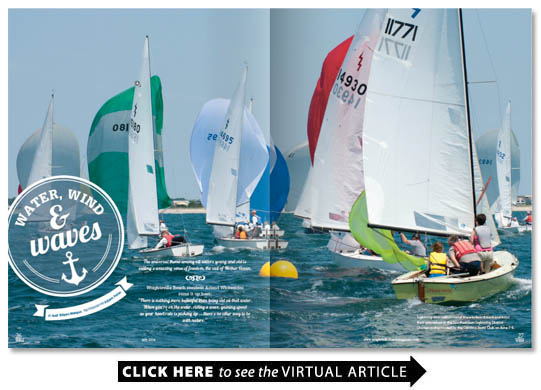 The universal theme among all sailors young and old is sailing s amazing sense of freedom the call of Mother Ocean.

Wrightsville Beach resident Arland Whitesides sums it up best: There is nothing more beautiful than being out on that water. When you re on the water riding a wave gaining speed as your heart rate is picking up there s no other way to be with nature.

When Arland and her husband Chip both 62 decided to start sailing 35 years ago they didn t take lessons.

Living in Richmond Virginia at the time they bought an 8-foot Snark and taught themselves.

Most people don t admit they owned a Snark   Chip says with a laugh.  It s like a surfboard with a sail.

Arland adds   We would just go in circles.

Nonetheless the Whitesideses read books and kept trying. It wasn t long before they were hooked. They bought a bigger boat. Arland says   This shows you how dumb we were. We drove to Norfolk Virginia and we bought a boat. We didn t know if it would sail or sink but we bought it. We had boat fever.

Their pet beagle and over time two children would join them on the sailboat.

We just wanted to be out on the water   Arland explains.  We would get out there and go   Wonder what that does?  Sometimes we d have to get off the boat at the shore turn it around and go back out.

Most sailors agree that skills improve by traveling and racing in different environments and against different people.

You get better as a sailor when you race and that s why we started racing   Arland says.

The Whitesideses have sailed in regattas from Canada to Florida. They are members of a tri-state North Carolina South Carolina and Georgia sailing association. Chip and Arland compete in one-design racing.

Everyone has the same kind of boat which makes the competition very tough. You can t buy your trophy with one-design   Arland explains.  We mainly sail a Snipe. It was developed in the 1930s so it s an old class.

The Whitesideses just want to have fun. They aren t worried about winning but they don t want to come in last either. Arland says people don t realize that sailing is physically challenging.

You have to prepare   she explains.  You go to the gym. A lot. You eat right exercise and get out on your boat and practice.

In addition to running she focuses on her quadriceps abdomen upper body and shoulders.

You use your abs and thighs to keep the boat from flipping   she explains.

I ve learned how to deal with bullies   Arland says.  Sailing teaches you independence but also teaches you how to stand up for yourself and not be intimidated by hairy men yelling at you because that s what you encounter on the water.

Chip adds   Men don t want to get beat by a woman.

Arland is adamant that everyone in the family can sail.

Everybody gets to go sailing everybody gets to race and nobody sits in a chair all day Saturday   she explains.  As a parent you take your children to the soccer field they sit on the bench. The coach may put  em in for a few minutes. They come home and are distraught because they only played a few minutes. There s no sitting on the bench in sailing.

As sailors race more regattas they gain friends throughout the country. Those friends become like family.

As a family sport you can t get any better. And sailing friends are like no other   Arland says.

The boys fell in love with it.

When the family moved to Wrightsville Beach they took more lessons at the Carolina Yacht Club and soon joined the racing team. Trey 17 started on a Sunfish about 13 feet. He now sails a Laser Performance sailboat which is about 16 feet. Trey is also a US Sailing Level 1 instructor and certified lifeguard.

Sailing has helped me get into college   Trey says. He s been recruited by Jacksonville University to sail for its team. Chase 14 sails an Optimist Opti for short a beginner boat about 8 feet that youth can sail until they are 15 years old. However Chase is tall for his age and will size out of his boat before he ages out.

Trey s first regatta was an Atlantic Coast Championship. He has also competed in the Orange Bowl Regatta in Miami for the past two years. It s the biggest international youth regatta in the US with top Laser sailors representing 26 different countries. He has also raced in the Cressy Trophy Regatta the only high school Laser sailboat regatta of the season.

Traveling with the team is fun   Trey says.

Chase is a member of the United States Optimist Dingy Association (USODA) and competes for Carolina Yacht Club PRIME Sailing Team in Charleston SC and SailStrong in New York. He practices with teams around the country. USODA sailors qualify for team trials then the national or development team. Chase s race finishes have given him the chance to travel to the 2014 British Nationals Championship an eight-day race in Weymouth a seaside town in Dorset England where the sailing events of the 2012 Olympic Games were held.

My goal is to make the US Olympic team   Chase says.

Sailing is one of the few sports in which men and women compete against each other on an equal plane. One of Chase s teams includes eight girls and seven boys.

The Carraway brothers  mother Boo Carraway 45 says   I ve seen some cute little sailors who can clean their clocks.  Her husband Stanley 49 adds   Our boys communicate better with girls because sailing is a co-ed sport.

Chase spends his free time training on water and exercising to build endurance. He practices tacking — the maneuver of turning the boat upwind or downwind. Sailors use their bodies to change the direction of the boat which is difficult because the sailor is working against the wind. Chase also works out to strengthen his abdominal muscles with planks wall sits and six inches or holding his feet six inches above the floor.

It helps me hike out longer   Chase says. Regattas can be hours long. Participants could sail one to three miles before even reaching the racecourse.

Joe Baggett traveled more than 900 miles to enter his most recent race.

The 56-year-old Harbor Island resident owns a 24-foot J70 sail boat and recently trailered it to Key West to race.

His father bought a Sunfish sailboat for him when he was 10 years old. He taught himself and his older brother also sailed. In Fayetteville where he grew up water was minimal. Still he sailed at White Lake and spent summers in Wrightsville Beach. As Baggett excelled he moved to bigger boats and competed in regattas along the East Coast.

It has a lot to offer. It s physical the kids are outside and it s a good relationship builder for kids   Joe says. Boys and girls of various ages interact with each other.  In sailing you see a 10-year-old hanging out with a 14- or 17-year-old. You wouldn t find this in a school setting. That s what is so unique about youth sailing.

His son Polk 11 has been sailing in the Optimist dinghy class for two years and is already learning good sportsmanship discipline and how to settle differences on the water.

Joe is passionate about starting a high school sailing team in the Cape Fear region.  I hope we can take this energy and create a team beyond the Opti class.