Once consumed because of poverty and scarcity, these foods are now sought out 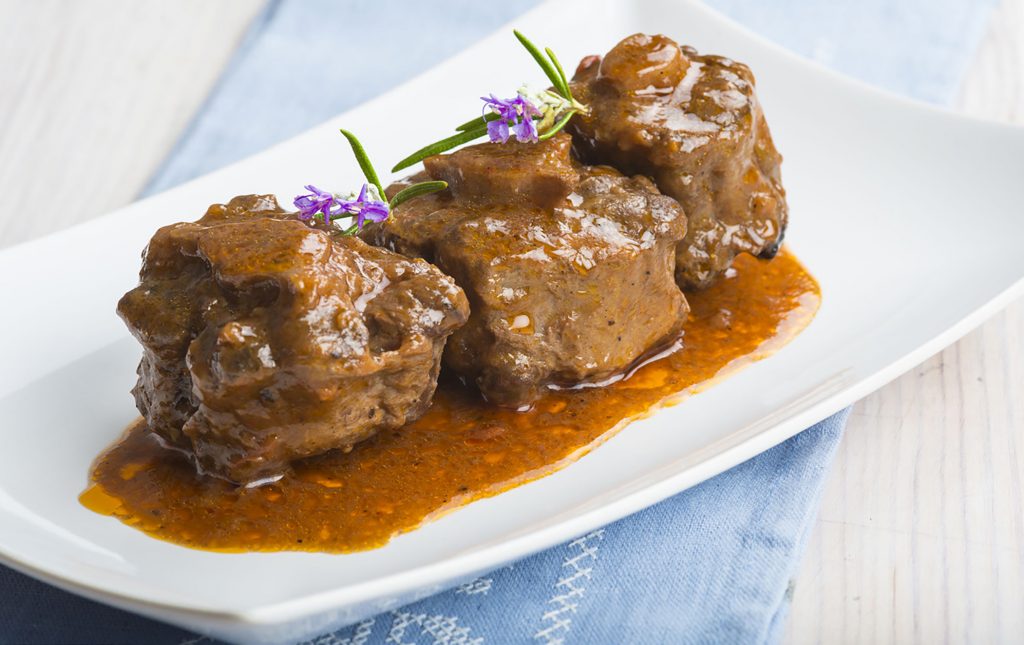 “Pig Feet Everyday,” the sign proudly proclaims. Pig feet every day? Anyone who grew up north of the Mason-Dixon line might wonder why you would want them any day. But to Southerners of a certain vintage, it sounds like a delicious treat.

The sign is at Casey’s Buffet, the “Barbecue & Home Cookin’” restaurant on Oleander. Owner/head chef Larry Casey took a chance by offering Pig Feet Fridays a few years back. They proved so popular he added them to the daily offerings. And put them on the sign.

“The first couple of years I didn’t have pig feet out there,” says Casey, who opened the establishment in 2005. “I got craving ’em one day. I sent someone to the Food Lion and they bought all they had, about 33. It takes about three hours to cook them. I ate a mess of them and got full, and I put the rest out on the buffet. My wife’s like, ‘Man you’re going to gross people out.’ I’m like, ‘I grew up eatin’ ’em.’ They were gone in about 10 minutes. I started doing them on Friday, Pig Feet Friday. I finally procured a couple of sources for the pig feet, and I started doing them every day.”

“I call it Southern soul food,” Casey says. “We’ve got country cookin’, but then we’ve got the soul food too.”

The offerings are enjoyed by a diverse clientele — black and white, young and old, white collar and blue collar, locals and tourists. Some of the patrons can easily afford filet mignon, caviar and foie gras, but they frequent the homey eatery with the nondescript façade, no-frills décor and Formica-topped tables.

“We get them all, from every socio-economic background,” Casey says. “I’ve got politicians eating in here. Sanitation workers. You name it. President Trump’s son, Erik, he married a local girl [Lara Yunaska Trump], they come in a couple of times a year when they’re in town.”

Pig feet, along with much of the food at Casey’s, belong to a food group that could roughly be defined as “stuff poor folk used to eat.” Much of it has its roots in the antebellum South, when enslaved people had to make do with the master’s discards.

Casey is well read, a student of history as well as cooking. He’s researched the background of the food he serves.

“If you look back through history, what we call soul food now, which is a term that came about in the 1960s, if you go back to slave times the slaves that were in the field would get what was left, the feet and the guts, what we call chitlins now,” he says. “It was out of necessity.”

The “out of necessity” eating was not limited to enslaved people in the South. Throughout the ages, poverty and scarcity have been defining factors in food choices. When you don’t have an abundance of resources, you make do with what you have.

“We didn’t always live in a disposable society,” Casey says. “There was a time when economic necessity precluded just tossing aside the unwanted or least desirable. For the majority of history, there’s been a lack of food. So we would use everything on an animal.”

There was a saying that, when a pig was butchered, “everything was used except the squeal.” Even the feet and the guts. Killing a chicken? Sure, the breasts and thighs are tasty. But better find a way to use the neck, organs and gizzard. Slaughtering a cow? Enjoy the steaks, and don’t forget the stomach. And the tail.

The list of “necessity foods” spans cultures and countries. It includes menudo, tripas, chitterlings, oxtails, neck bones, livermush, sausage, chicken fried steak, monkfish, and even lobster. All were the least palatable part of an animal, or something that was unwanted by the wealthy. When you’re hungry, though, anything will do.

All are still eaten. Not necessarily out of necessity, but out of preference. In a society with plentiful food at affordable prices people no longer have to eat pig feet and the like. But they choose to.

Often, it’s because of nostalgia. Food that might have been on the table generations ago because of need becomes part of family lore, passed down as grandma’s favorite recipe.

“I’ve got one guy who eats with me, he calls it memory food,” Casey says. “It’s the food he grew up eating. He’s been on a paleo diet for like 30 years. He’ll cheat a little when he’s in here.”

Casey’s own childhood informed his taste for food, and his career choice.

“I grew up poor, and pig feet were economical,” he says. “My grandma would cook them and the fatback; she was a great country cook. I had a lot of African-American friends. My best friend was black, and that’s where I got eating chitlins and hog maws, at his grandmother’s house. When I was a kid, I wanted to get in the restaurant business. I’ve done everything from fast food to fine dining. I thought I was going to be a fancy chef. But this is what I grew up doing, and this is what I sort of ended up doing.”

The key to good, healthy chitlins is to clean them thoroughly. Then they are usually stewed, broiled or fried. They are especially popular at festive occasions like New Year’s, Christmas and Thanksgiving, not necessarily because they are a specialty dish but because they are labor intensive and take a long time to prepare.

In the U.S., chitlins are primarily soul food passed down from the time when enslaved people had to make do with the unwanted meat from hog killings, but a form of the dish is found in cultures in Europe, Asia and Latin America.

Another popular soul food dish that’s a close cousin to chitlins is hog maw, made from the stomach of a pig. Like chitlins, they are found in many other cultures.

Among the most popular dishes at every good taqueria in Wilmington is menudo, a traditional Mexican soup made with cow’s stomach. The pungent aroma and strong, smoky taste can be off-putting to newbies, but it’s a delicacy to people who grew up with it. Also popular are tripas, small intestines typically used in tacos.

Animal innards and other waste products are popular in cuisine around the world. Haggis, Scotland’s national dish, is sheep’s stomach stuffed with minced heart, liver and lungs. Tripe is used globally in dishes like andouille, babat, pho and pancita.

In Colonial America, lobsters were so commonplace they were the food of common people. Referred to as an insect of the sea, the crustacean wasn’t likely to be found on the table of the well-to-do. It was even fed to prisoners and servants, and ground up and used as fertilizer.

That began to change in the mid-1800s, when the railroad made it possible to transport canned lobster to the middle of the country. Soon, tourists visiting the coast were asking for fresh lobster. Prices soared as demand grew, which is why it’s among the most expensive items on the menu of most seafood restaurants.

Pigs first arrived in the United States when Hernando de Soto brought 13 hogs to Florida in 1539. They soon became an American staple. They are easy to raise and care for and are very versatile. Virtually every part of the animal yielded something that could be eaten.

They offer choice cuts of meat on the upper flanks — if you could afford them you were living “high on the hog.”

Pig feet were, literally and figuratively, low on the hog. They are primarily succulent fat and cartilage. Because of the connective tissue and thick skin, they are best cooked slowly over low heat. Common techniques include boiling and braising. They can be used as a stand-alone dish, or in stocks and sauces.

They have become a trendy food in some parts of the world as an anti-aging food because they are rich in collagen.

Head back to the American South for this popular dish. Livermush, or liver pudding, is made with pig liver, parts of pig heads, cornmeal and spices. It’s typically sold in loaves, fried up and served for breakfast. It originated in rural western North Carolina, where it was a cheap, filling food popular with workers in textile mills and furniture factories. There are annual livermush festivals in Shelby and Marion.

Livermush is very much a regional food, but the principle of combining leftover animal parts with a binding agent is seen around the world in various types of sausage.

Oxtail is somewhat of a misnomer. It originally referred to the tail of a steer. Now it’s a generic name for the tail of cattle. An oxtail typically weighs about 7 pounds. It is skinned and cut into short lengths. Because of the high fat content and long cooking times, oxtails once were eaten mainly by poor people and were inexpensive and plentiful. But prices went up as chefs began using the flavorful, gelatin-rich meat in soups and stocks.